Monday (July 4th, 2016) was the fourth of july which is a pretty important holiday to my family. We always celebrate it with lots of family and friends and of course a barbeque. However, in Korea it was just a normal day so I just wore red shorts and a blue t-shirt (I was trying to be a bit festive). Monday was also my first day at Sookmyung Women’s University. Well, it technically wasn’t the first day of classes… we were only going to take a placement test to see what class we should get placed into.

After breakfast I had to ride the subway to Sookmyung by myself for the first time ever (It was also the first time I rode the subway by myself anywhere). To get to the closest subway station to my apartment, I had to walk for around 8 minutes so it wasn’t bad at all. It was raining (drizzling) so instead of going the way my host mom took me, I ended up taking this shortcut which cut the trip in half (it was less modern looking though). 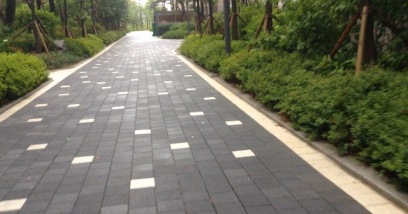 Super blurry pictures but it is SUPER hard to take good quality pictures when you are walking and trying not to be late for school.

Many of the Nsliyians I talked to didn’t really like the subway (because it was so crowded especially in the morning) but I honestly love the subway. It is so easy to learn how to use and it makes traveling anywhere so convenient. The subway made me feel so independent and I honestly loved the 35 minutes I had to spend on the subway that morning. It could get kinda awkward at times because literally all the Koreans on the train are on their phones. They are either messaging people, watching variety shows or Korean dramas, or playing apps. I never had wifi on the subway (there is wifi but you need to have an account) so I always just stare out the window. It would get really awkward when I would get stuck in the middle of people because there would be no where to look! (I also would get stares on the subway because I was so obviously a foreigner).

Anyway, the subway ride proved to very fun because at the stop right before Sookmyung Women’s University, I ran into Yves and his host mom (do you realize that meeting him on the subway had to be like a 1/100,000,000,000,000 chance of happening? haha) Yves and I got to the station at 8:35am. After waiting for everyone to show up, the RDs and some staff from Better World walked us to the university and showed us how to get there from exit #8 (my host mom showed me how to get to the school from exit #10).

At the university we took our placement test for the Korean classes. The test was mostly multiple choice but there were a few questions where you needed to write in the correct word. There were a few passages you had to read in order to answer the following questions and then the last question had you format the words into a coherent sentence. I felt pretty good about the test. All of the NSLI-Y8 kids finished the test really quickly. The Korean teachers assumed that we thought the test was too easy… boy, were they wrong. What it really meant was that most people didn’t know what they were doing so they guessed on most of the answers. We were moved to another room where we took a second placement test. I am not kidding, I guessed on every single question. I understood none of that test. It was so bad.

We then had to take a speaking/listening test which was an interview in a tiny, tiny room with one of the Korean teachers. I felt fairly good about how mine went. I was able to answer every question though I did ask her to repeat a few of the questions. My interviewer was so sweet and she encouraged me with every answer I gave her. She also would make this “hmm mm ” sound when I would give an answer. It is really hard to explain nonverbally but it was a really cute sound that made me more at ease with my Korean skills.

The bag of snacks

Sofia stole my phone during the orientation and took like 200 selfies. I bet she regrets it now XD

Then we split up into 2 groups of 25 kids and toured the school. This lady showed us around the library and the study rooms in case we wanted to take advantage of those things when studying Korean in the future. 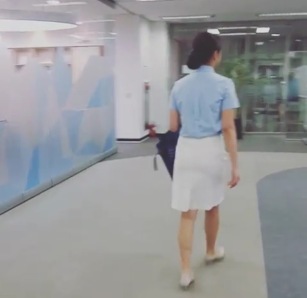 Then our RD JT took us to the nearest bank where we could exchange money and take out money from our debit cards whenever we needed to (The bank everyone used was called Shinhan Bank).

Then we had a tiny meeting to explain the plans for tomorrow. We would be going to the National Museum of Korea and the Hangul Museum after classes and lunch.

After everything was over, it was already 4pm and it was still raining. Most of the Nsliyians took a trip to Hongdae but because it was so late I decided to eat dinner near Sookmyung with a couple other girls (Sofia, Rhea, Teresa, and Mckenzie). We went to this Japanese restaurant near exit #8 and it was actually really delicious. I got an omurice (A japanese dish that consisted of an omelet over fried rice). The other girls ordered Cheese Tonkatsu (Japanese fried pork cutlet). We spent a couple hours at the restaurant just eating and talking

I got home around 7pm and ate a small dinner with my host family (I was not hungry but I ate with them anyway). We ate some chicken dish I don’t know the name of.

And that was my first day at Sookmyung Women’s University (well not the first day of classes but still a first day of something). I hope you enjoyed reading and don’t forget to subscribe to my blog. Thanks for reading~ 안녕!