July 2nd, 2016 was the day that our host families would be picking us up from the hostel. The morning started off with some breakfast in our room as usual. We were given an assortment of muffins once again (blueberry muffins never disappoint) and more juice boxes.

The outfit I wore to meet my family. They recommended us to wear something casual but nice.

After breakfast we did an activity about host families. We had to write down the stuff we would do with our host family, how we would help them throughout the summer, and our worries about what was to come. We then listened to various host family situations (that were all real) and how to solve these issues without making anyone mad or ruining relationships in the process. We even had to perform a skit which was actually pretty fun (I played an angry host dad haha). After all the skits were performed, we got our stipends for the first three weeks of the summer as well as our program phones. My program phone was a pink flip phone and it was actually super adorable. The cover was electronic so every time it was opened and closed, a little virtual bird would fly across the front and then the time and date would flash across as well. My music was also pretty popping. All my ringtones were OSTs from Secret Garden (I never watched the whole series. I never got around to finishing the last episode).

I couldn’t find a picture of my phone w/o scrolling through all my photos (there are too many) so here is a stock photo of the exact phone I had.

Then we had lunch which was more japchae, fish, rice, soup, and more banchan (반찬 is Korean side dishes. A staple for every Korean meal) I don’t know the name of.

After lunch was when everyone started leaving one by one with their host families. We were sitting up in the presentation room being all anxious as our RDs and Better World Staff would call someone’s name and help them take their luggage down to the lobby. It was such a torturous environment. We all kept betting on who would be next and when a car pulled up, we all tried to guess which person the family belonged to.

Everyone stalking the parking lot

Eventually JT called my name and I internally died. Everyone screamed my name and shouted Fighting! (good luck in Korean). I hugged everyone around me (it was like I was going off to war and I had to say goodbye to my family haha). I came down to the lobby and was super scared. I didn’t know what my host family looked like and I was afraid of walking up to the wrong family (there were multiple waiting). I walked up to one of the Better World staff and asked them. They shoved me towards a family and then the photographer took several photos of us (I also don’t know where those photos went…). I followed the family to their car with Grace as she was also leaving with her family at the same time. She started to speak to her host dad in almost perfect sounding Korean and I was afraid that my host family expected me to sound like that too. My host mom (in English) asked me if I spoke Korean well and I shot that idea down real quick with a simple no. I was relieved to hear her speak English and I soon found out that she owned an English Hagwon (학원 is an after school tutoring center) near the apartment. You would expect that the car ride would be really awkward but it honestly wasn’t too bad (still awkward though). My host mom spoke English very very well so during the car ride she only communicated to me in English and I tried to use my nonexistent Korean skills but mostly found myself answering her questions in English. My youngest host brother was in the passenger seat of the car and he didn’t say one word to me. My host dad tried to add onto the conversation but his English wasn’t good and every time he messed up he would apologize and stop saying his thought. I kept telling him it was alright but he was so nervous about speaking in English.

The first thing we did was my host dad drove us to this lookout place (I really don’t know what to call it nor the official name for it). We parked on the side of a hill and walked along this path until we got to a cliff with a fence keeping anyone from falling off. There were those binocular machines and even a police officer standing guard. My host mom told me he was there because the location had a perfect view of the Blue House (the place where the Korean president lives). There was a plastic map stand and so my host mom showed me all the famous things that could be seen from this point including Namsan Tower (she was surprised when I told her I had already known what Namsan Tower was).

We spent around 10 minutes looking at the view of Seoul and then we returned to the car and started driving again. My host mom asked me about my life back in Illinois. Things like what my family did for fun, how my brothers acted, and what I usually ate for breakfast, etc. We took a quick stop at Digital Media City at this Ice Cream store and picked up this giant container of ice cream for my youngest host brother to share with my host dad. My host mom also bought me and her a cup of green tea ice cream. It was so weird having her buy something for me. I felt really bad about it at the time. 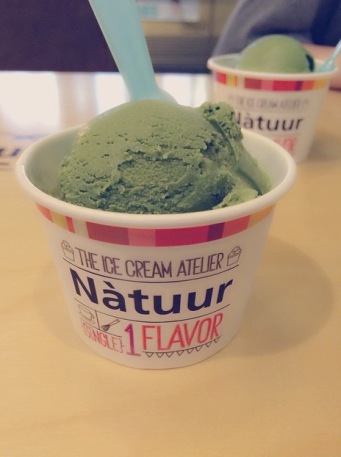 After Icecream, we drove to Seoul World Cup Stadium. Next to the stadium there was a huge field that little kids played soccer at. The teams that play there are called The Future of Seoul. The field was very big and it was split into 4 sections for 4 different teams split up by age group. My little host brother was there for a soccer practice. I sat with my host mom and host dad watching the practice. My host mom and I also walked to the supermarket (that was right next to the stadium, there was also a movie theater) and bought a few groceries. We walked around and she asked me what I had tried and what I wanted to try and bought things to make for the next week.

The field (before the practices officially began)

For dinner we had Korean BBQ (삼겹살) and it was so delicious. It was the first time I had Korean BBQ and it was such a fun time. It was hard at first because I could not put the lettuce wraps in my mouth and not look like a crazy person trying to chew the food. Koreans must be born with this skill. haha My older younger host brother also joined us for dinner. He just walked into the restaurant and I was so confused on how he got there (I soon found out it was only a 7 minute walk from the apartment).

When we finally got to the apartment, my host mom showed me my room (it had been my host brothers room- the older of the two. He was now sharing with his younger brother) She showed me around the apartment. Explained to me what shower shoes were and how to throw things away properly. I then went to bed because I was so tired but before I did so, I had to actually ask my host mom how to close the door because it had a magnet and was connected to the wall. It was nothing like I had ever seen before so after freaking out for five minutes, I finally asked her and she helped me (culture shock moment #1 haha).

That was my first day with my host family! They are honestly the sweetest family ever and I could tell that they were really excited to host me for the summer. I was excited for what was to come as well since my host mom told me  that once this weekend was over, she would try to never use English with me again. I was excited for this practice, it had been what I was looking forward to since I found out about NSLI-Y in 7th grade.

Thank you for reading and I hope you enjoyed! Please subscribe to my blog by adding your email and you will then receive emails every time I update. Hope to see you soon!~ 안녕!~