On Saturday (July 9th 2016) I went to my youngest host brothers soccer practice for The Future of Seoul once again. I am used to going to soccer games/practices because I actually have a twin brother who plays soccer back home. However, I still found the practice very boring and it was super super hot outside! I almost fell asleep too! Luckily, I was able to talk to my host mom throughout the duration of the Soccer practice which made it more fun and definitely more memorable.

After his practice, I was introduced to friends of the family. They were all very sweet when talking to me even though they underestimated my Korean skills {I soon proved them wrong 🙂 }. It was a nice meeting and I got even happier when my host mom introduced me to them as her daughter. It really made me feel like part of the family. We went out to eat together at this really fancy Italian restaurant in this shopping center like structure underneath/next to the stadium (It is VERY confusing to explain… You might just have to check it out for yourself ^^). I ordered this olive oil pasta and even though it was Italian, it was probably the spiciest pasta I had ever eaten. You would have thought I ordered Kimchi noodles. I refilled my water cup so many times! haha

After dinner I went with my youngest host brother, his two friends, and the husbands of my host mom’s friends to the World Cup Stadium to watch a soccer game! When my host mom started talking about going to the game that was happening tonight, I got super excited. She told me that I could stay and hang out with the mothers at a cafe if I didn’t want to go. I reassured her that I really wanted to watch the game. It was a great opportunity! 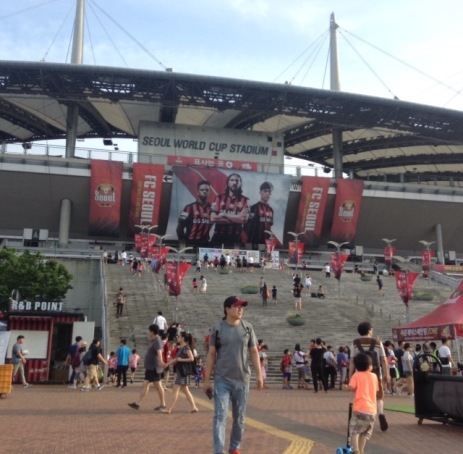 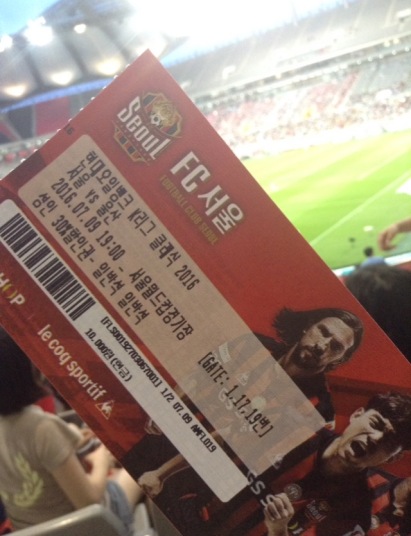 Seoul VS Ulsan (서울 VS 울산)

The soccer game started promptly at 7pm and the whole experience was very interesting. This was my first time being at a professional soccer game so I can’t really compare it to anything else in my past but I did make a lot of observations. And Korean soccer games are definitely different than professional baseball or hockey games that I have been to. 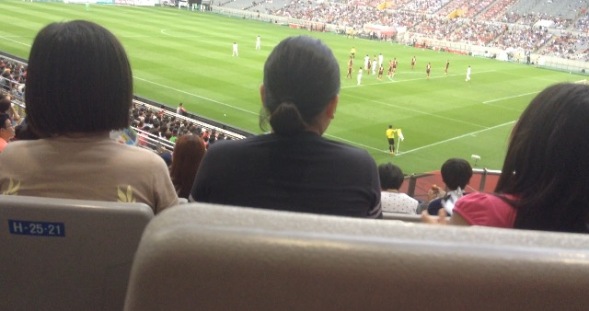 One thing about Korean soccer games that I thought was very interesting was that they all seem to have memorized these fan chants. There are like 3 different ones and they shout them during certain times throughout the game. There were also songs that everyone would sing and clap along to.

There were also these annoying, loud horn type things. I believe they are called “Vuvuzelas” and they are said to have originated in South Africa and that is where their name comes from (the original creator, according to my research, is hard to pinpoint). Koreans LOVE to use them and they were constantly being blown at the game. The tv screens actually show images of the horns when they want the audience to use them. 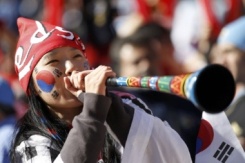 Picture of a Vuvuzela from Google

There was also a part of the game where everyone held up their phone with the flashlight on and sang this song that was playing through the speakers. Luckily for me, the lyrics were flashing across the screen so I was able to participate with my phone and sing too!

The game was overall really fun and I am very fortunate to have been granted the opportunity to do something like that. It was also really fun to experience the game with my host brother as sometimes I find it hard to get close to him as our interests are very different. But we bonded a lot that day, especially sharing snacks! XD haha

The only downside was that no one won! The game was very action packed but it still ended in a tie 0 – 0 !!!

After the game was over, my host mom, my youngest host brother, and I visited HomePlus (the supermarket underneath/next to the stadium. I went there last weekend too!) We shopped around for the upcoming weeks groceries (I helped my host brother out and convinced my host mom to buy chocolate milk for him and I but in reality, it was all for him. I don’t like chocolate milk). My host brother and I also both ate some waffles for dessert! He ordered a waffle filled with strawberry cream while mine was vanilla cream.

It was VERY delicious!~

My host brother enjoying his waffle

We got home around midnight (past curfew omg! haha). It was all okay because I was with my host family 😉 During the car ride back home, my brother and I bonded over kpop groups. His favorite is CNBLUE. I was offended he didn’t know SHINee!

Hope you enjoyed reading this post. Thanks for reading and don’t forget to subscribe by adding your email to the right side of this post (or all the way at the bottom of my posts if you are on mobile). 안녕!~