Tuesday (July 12, 2016) was a really fun day because I met my college student supporter! I would be hanging out with her and two other Nsliyians twice a week for the next 5 weeks. (I will make a post solely about supporter groups in the future.) I was excited to meet my supporter and hang out more with the Nsliyians in my group (Jodi & Casey) because I really hadn’t gotten any chances to hang out with them yet. Especially Casey.

I was very tired at school because I stayed up till midnight the night before writing in my journal. We also got assigned a lot of homework so I was feeling the stress >~< haha    After school, I went out for lunch with Casey, Jodi, and Jane. We went to 김밥천국 (Kimbap Heaven) once again. I have literally been to that restaurant three times already. It is a crowd favorite in my program because the food is delicious and the prices can not be beat! That day I ordered the 계란김밥 (Egg Kimbap). Casey and Jodi ordered Mandu Ramen (만두 라면). Jane ordered a cheese donkatsu but instead they gave her this noodle soup type thing. She was too shy to correct them so she just ate it unhappily (Jane really really wanted to try 치즈 돈까스). 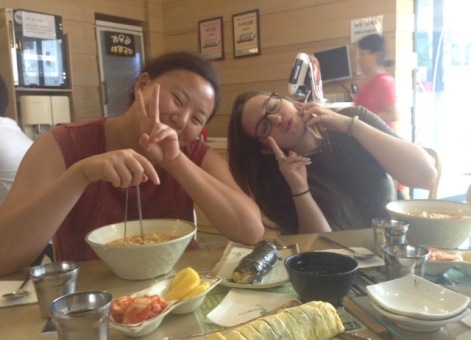 Jane is a bit washed out haha

After lunch, we started heading back to the school which was the meeting spot for today because our supporter wanted to make sure that we would be able to find the cafe (smart move, I would have probably gotten lost XD). While we were walking we passed by this 7/11 in which I spotted the carp bread ice cream in the freezers outside. We decided to buy ice cream for dessert and I even bought a vanilla cone to give to 수진 (Sujin – our supporter) when we finally met up with her. We were meeting her at the school at 2:40pm. When we first met her, it was very awkward. Everyone was nervous, even chatty Jodi! haha However, I think the ice cream was a good way to break the ice. 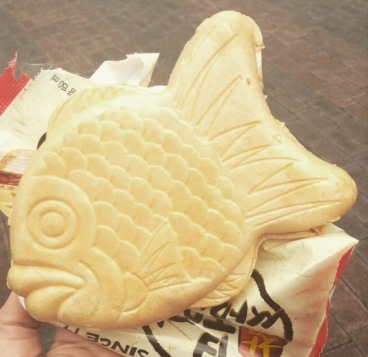 Our meeting spot in front of the school

We all walked to this Cafe for our meeting. The name of the cafe was Cafe Areca and it had a really good atmosphere. 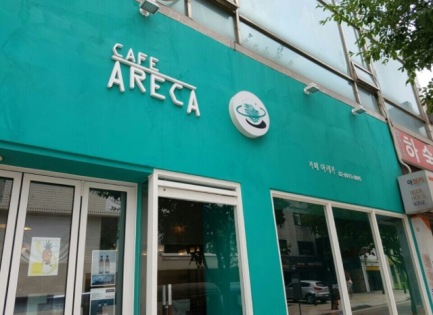 Our first meeting was just going over the schedule for the next few weeks. Sujin also showed us the layout of each of the meetings where we would be studying Korean. Once that was done, our supporter bought us drinks from the cafe (they get a stipend to spend on food and drinks for the meetings). I ordered a banana chocolate smoothie. Eventually we pushed some tables together in the cafe and formed a huge group with my supporter group (수진, jodi, Casey, and I), and two other supporter groups (준 (Jun) with Peter, Ariel, Yves & 다영 (Dayoung) with Mckenzie & Sarah). Jun’s group was made up of my 나무 반 classmates while Dayoung’s group was made up of Nsliyians from one of the beginner Korean classes.  Once they joined us, we played some icebreaker games. We shared our name, hometown, and one of our hobbies. We also played this name memorization game which was very similar to the picnic game where you have to remember what everyone brought to the picnic. Then we played Never Have I Ever and I lost one of the games so my supporter Sujin had to flick me in the forehead (classic Korean punishment). However, she didn’t do it hard at all which was good for my forehead. I also flicked Yves in the head as one of his punishments since he picked me to the deliver the pain. (mwahahahaha!)

After the supporter meeting I took a different route home on the subway line so I could spend some more time with Casey but It ended up taking me a lot longer to get home. I ended up going home right after the meeting since I had so much homework to do for the next day and it wouldn’t hurt me to study some more. I ate dinner with my host family as usual and then went to bed after writing in my journal. 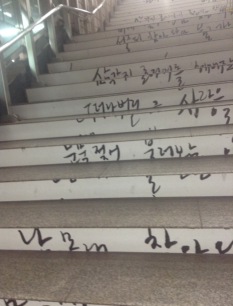 Cool staircase with Hangul in the Subway

Even though today was awkward at times, I had a lot of fun meeting my supporter. I am really excited to improve my Korean and be able to have more meaningful conversations with her. I can totally see us really getting close and I hope we do! I can’t wait for Thursday!

Thanks for reading and I hope you enjoyed!~ 안녕!!!