Monday (07/18/16) was another one of those days where the main goal was to check off something from the Korea Bucket List. Korean class was normal as usual. We got a lot of homework which is the usual part. We also had our Monday Meeting where JT and Madeline (our RDs) announced the top three winners for the Weekly Photo Challenge. And guess what! My supporter group won second place! haha So as a prize we recieved a whole box of 12 Banana Choco Pies (바나나 초코 파이). Choco Pies are a very popular Korean treat and recently they came out with a banana version. They became our snacks during Korean class for the following days.

So today, after school, the plan was to go to a traditional Korean village with Sofia and Anna-Kate after a nice quick lunch at the Hello Kitty themed restaurant I had eaten at with my Host mom during the first weekend in Seoul, South Korea. We ended up eating the same thing I had with my host mom which was a cheese ddukbokki set with fish cakes and mandu. The girls really loved the food and were really glad that I brought them to the restaurant. 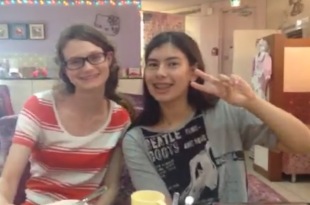 After eating we followed directions I had found online to 남산골한옥마을 (Namsan Hanok Village) and after a few missed turns, we ended up going down the right street to find the main entrance of the village. 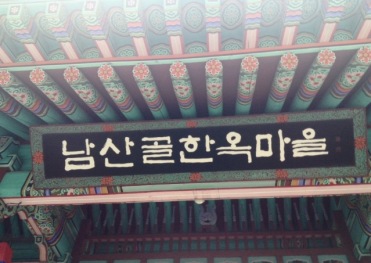 You can see Namsan Tower in the distance

The traditional village was a very fun experience. The girls and I probably spent almost three hours walking around the whole thing looking at the houses and some artifacts inside. All the houses and areas in the village had many signs explaining what everything was in detail (In Korean, Chinese, and English). I took so many pictures of everything that we saw since everything was honestly very pretty. It was so interesting taking photos of the traditional structures and having skyscrapers and modern buildings in the background of the photos. It is so cool to me to see traditional Korean culture mix with the modern culture so smoothly with pockets of traditional villages and temples in Seoul. Especially when you are simply exploring Seoul and you accidently run in to such pockets of tradition and history. We went into this one section of the village that showed you the inside of the houses and we were able to see traditional Korean furniture. You could also try on Hanboks at the village but we decided to save that for another day probably somewhere else. 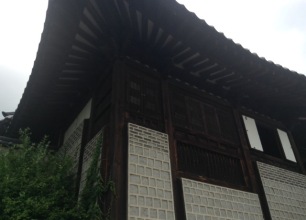 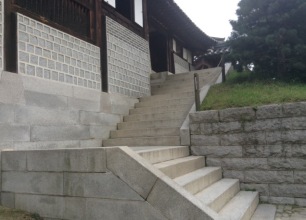 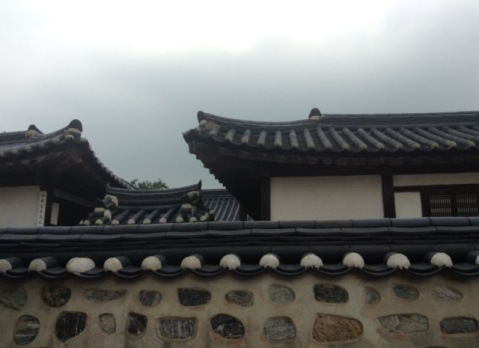 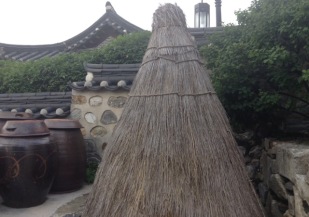 The inside of one of the rooms 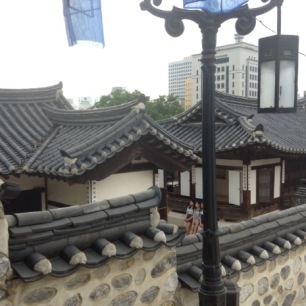 One of my favorite photos from the day

Besides the interesting architecture, the nature around the village was very beautiful as well. We even found some cute little waterfalls and ponds along the way. While we were walking around the grounds, we found an area with some old, traditional games. There was this arrow throwing game, some kind of checkers like game, and this game I have seen Korean pop idols play on some variety shows. Sofia tried it out and was actually pretty good with it. My knee wasn’t feeling too good that day so I refrained from trying it out. While Sofia was playing, there was this grandpa and possibly his son watching. They laughed along with us while Sofia struggled with playing the game and they clapped along with us while Sofia got better and better with playing the game as time went on. 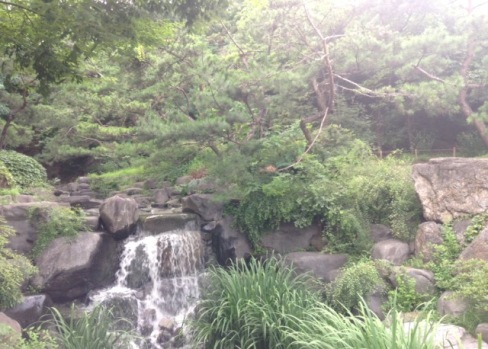 We took a lot of photos together and what you cant see from  all of them, is how often we burst out laughing at all the fun we were having with our mini photoshoots. The scenery was just beautiful!!!~ ❤ 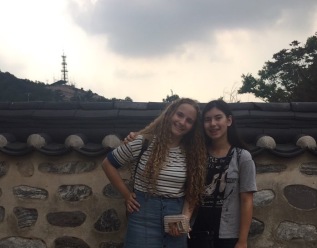 Okay this one kinda gives you an idea. We tried so hard to keep straight faces while bowing! XD

Eventually we all got a bit hungry and wanted a treat. So… we decided to get some Bingsu! What a surprise right? haha XD We could not find a Sulbing close by so we ended up going to Hollys cafe and trusting that they would not disappoint us with their bingsu. We ended up ordering a strawberry cheesecake bingsu which was so delicious!~

We hurried up and left the cafe after Anna-Kate spilled her barley tea all over the floor. Sofia and I wiped everything up with napkins and then left because we felt so embarrassed with all the stares. I ended up getting home just in time for dinner as usual and ate with my lovely host family. And that was my super fun Monday~ ^^

Thank you so much for reading and do not forget to follow my blog with your email! I hope you enjoyed and I will be back soon with another post~ 안녕!~