Today (July 21st, 2016) was the first cultural excursion I had with my supporter group and the two others that we usually share our meeting spot with. We would be going to Gyeongbokgung Palace (경복궁)! I was super excited to go since Gyeongbokgung is definitely a place everyone should visit when traveling around Seoul. Since we had to take travel time into consideration, we didn’t have too much time to have lunch. Therefore I had a quick convenience store lunch with Jodi, Casey, Sofia, and Yves. I definitely bought too much stuff but I shared my food with everyone so nothing was wasted.

Have you seen the Korean Drama “Cheese in the Trap?” This Kimbap is a little parody of it.

After lunch we visited Gyeongbokgung! The architecture of old Korean palaces is truly beautiful. I walked around with my supporter group through the palace grounds and took lots of pictures especially of the detailed roof tiles. I loved them so much. 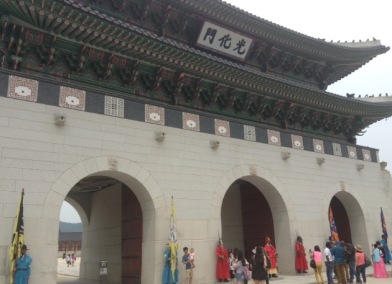 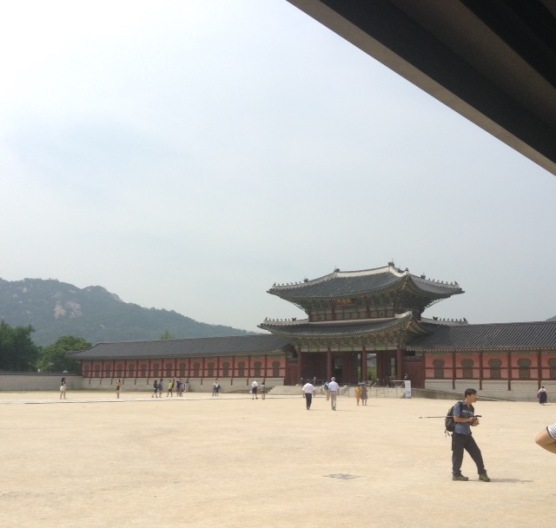 The roof details I was talking about

Casey and a Korean photobomber

It is pretty difficult to explain what everything looked like and that is why I have plenty of pictures to share from the day. I have plenty more but this blog post would be way too long 🙂 I think that a lot of them turned out very well! Especially the ones with some of my favorite people (If you haven’t gotten the message yet… they are my supporter group). 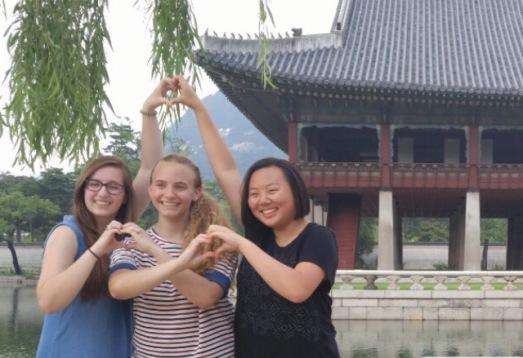 We know we are weird XD

Jodi, Me, and Casey 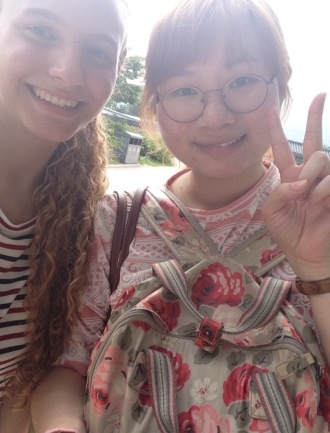 My RD Madeline and I

While we were walking around, JT and Madeline met up with us to spend the day with us as well. It was fun to hang out with them as they are such jokesters together! XD 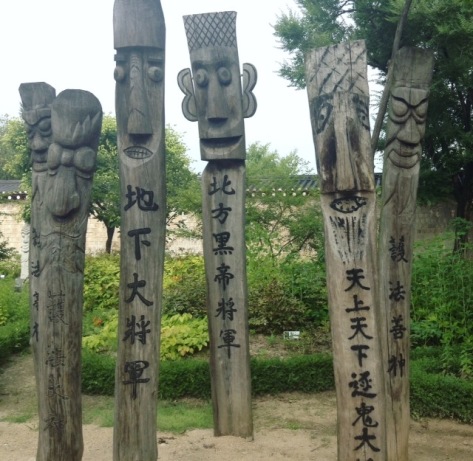 I remember when Sujin said “너같은데!” (It looks like you) to Jodi 😉

After visiting Gyeongbokgung , we walked around the surrounding streets to find some cafe to sit and eat at. Jun (준) was leading the way sticking his head into every cafe until he could find one that had enough seats. He accomplished this while simultaneously giving us information about everything we passed. I heard many childhood stories about him that afternoon and he isn’t even my supporter! XD

I was very artistic with the taking of these photos

Eventually we found this cute cafe and we were actually the only ones in there which was good because we took up all the seats on the first floor. (There were 13 of us.) As this is a common trend throughout my summer in Korea, my supporter group ate Bingsu! We ordered a Green Tea Mango Bingsu (녹차망고빙수) and the original Red Bean Bingsu (팥빙수) because Casey does not like eating fruit. I don’t understand why… she is so weird!

The best bingsu flavor I have had so far 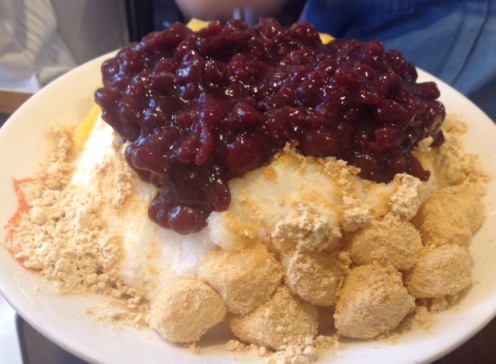 The back of the Cafe had some pretty cute wings. Reminds me a lot of the Korean Drama “To the Beautiful You”

After eating at the cafe, I planned to do something after with Sofia and Tucker from my Korean class – 나무반. We ended up deciding to go to the Han river and rent bicycles to ride. I met up with them kinda late as Jun was having a bit of trouble finding the closest subway station that we could use. However, I made it eventually and they can both agree that the wait was worth it since bike riding with them was so much fun! We rented bikes for an hour and they were $3 each. I ended up paying for both of them since I am such a good friend! ㅎㅎㅎㅎ 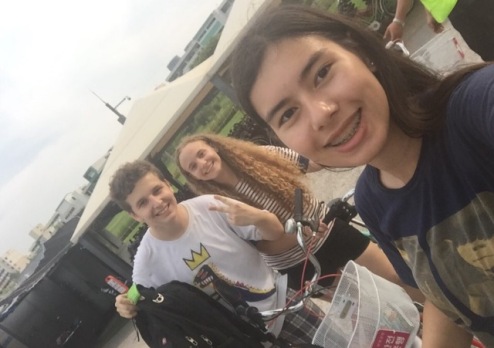 Us picking out our bikes

Biking was so much fun and the trails to ride on seemed neverending. There was a point in time where I thought we wouldn’t know how to get back before the hour was up and then have to pay a fee (I was not for that at all). Riding around the nature trail reminded me so much of the bike trail near my dad’s house back home. I only realized I was still in Seoul, South Korea when I would hear Tuckers old Kpop playlist (which consisted of T-ara for example) playing on his portable speakers and when I would catch glimpses of Korean modern architecture which is nothing like I see back home. It was honestly so fun and such a nice way to spend a day with friends. If we had more time, I would have loved to have had a picnic by the river with Fried Chicken and maybe a tent. (Something we saw everywhere when we were simply walking around.) 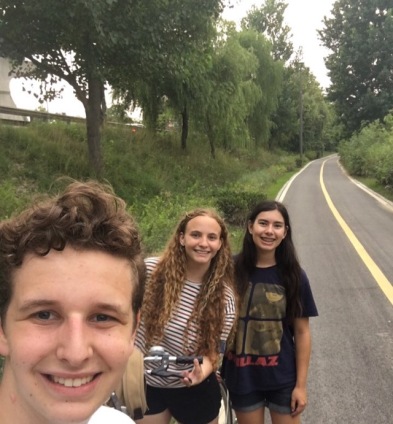 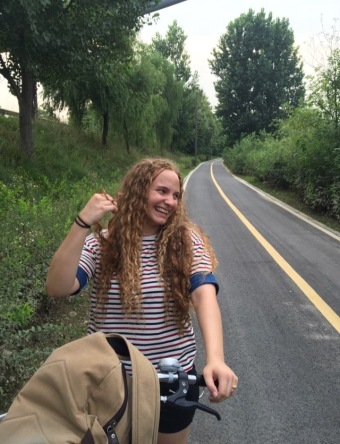 Why was I laughing? Tucker made a joke about the building we could see in the distance that had the word “Trump” written on it 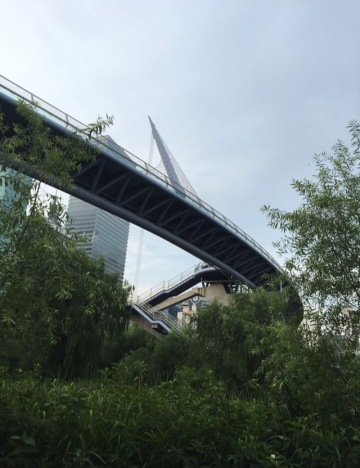 We bought chicken as a snack but unfortunately, it wasn’t all too great.

My first cultural excursion with my supporter group was loads of fun! This day made me even more excited to spend even more outside classroom time with my supporter group. And it made me hopeful that the different flavors of Bingsu I will try will only better in taste… I am only joking a little bit! 😉 The rest of the night was spent with my host family as we all went out for Korean Barbeque for my host moms birthday which was very nice. No one told me it was her birthday until I got a text about dinner plans so when I was walking to the apartment after the Han River, I bought a box of 12 doughnuts from Krispy Kreme. My host mom loves eating the original glazed with vanilla yogurt with blueberries. Even though I am pretty sure that my host brothers ate most of them by themselves. XD

Thanks for reading this post and I hope you enjoyed~ Do not forget to subscribe if you would like to read more about my time and experiences in Seoul, South Korea on the Nsli-y Scholarship! 안녕!