On Tuesday (July 26th, 2016) I had the opportunity to go to a Korean movie theater with my supporter Sujin and fellow classmates Jodi and Casey. During our supporter meeting at Cafe Areca, we were learning grammar points that would help us with reservations and making plans. Because of this, I started talking about going to a movie and reserving seats through a movie theater teller. (In South Korea, you can reserve your seats in advance so when you get to the theater, you do not have to worry about not being able to sit next to your friends or family or whatever.) Jodi thought it was a great idea and immediately started pestering Sujin and trying to convince her to come to the movies with us and watch Train to Busan which is the only thing my korean class has been talking about since it is supposed to be a really good movie about zombies. Where can you go wrong with zombies? haha XD If you want to know a little bit more about the movie, I will link a trailer right here . Eventually we kept bringing up the movie in our role plays and recordings and therefore Sujin finally agreed. She didn’t like how last minute it was but she had no plans after our meeting and so to the movies we went!~

Our Milkshakes During the Supporter Meeting

I have been wanting to go to a Korean movie theater ever since I watched a video about the movies from Eat Your Kimchi (back when they were living in Seoul). If you haven’t seen it I highly recommend you check it out in order to see some more visual elements of the theater since I did not take many pictures at all. Watch the video here.

The only movie theater in korea I noticed was the CGV in Myungdong but apparently there is also one in Yongsan Station and so my supporter Sujin was going to take us there. Yongsan station is huge! I use the station on my route to get to school but I never really went inside and it reminds me so much of a mall. It has many restaurants and shops and like I previously mentioned – there is also a movie theater. Sujin decided to make this movie experience more educational by forcing me to be the one to tell the lady what movie we wanted to see and reserve what seat section we wanted. She helped me out a lot though and we ended up getting exactly what we wanted. We then went to buy some food for the movies. We were definitely going to take advantage of the different popcorn flavors. Casey ended up getting a tray of dried squid while Jodi, Sujin, and I shared a caramel and normal butter popcorn. (I also know they have garlic and cheese popcorn.)

An example of what we got (Credit: Google)

The movie itself was very very good! It was so good that I would definitely watch it again some time later this summer if I knew other people were going to see it. The movie was super well done and the acting was incredible. They really got the best actors for the roles like Gong Yoo (공유) and Ma Dong Seok (마동석).

I also cried SOOOOO much during the movie. It was so good! There were no subtitles with the movie so it really tested my Korean abilities. I understood a majority of the Korean in the film. I could understand most of the conversation between characters. It was the phone call and train announcements that were throwing me off on the plot. But it is a zombie movie so it was pretty easy to enjoy it even if you can’t exactly understand every line. 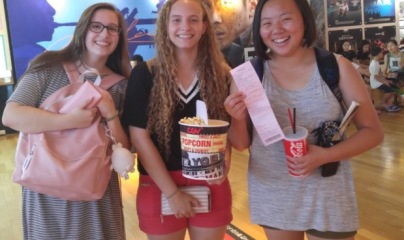 And that was my experience at a korean movie theater in Seoul with my supporter group. It was a lot of fun! I can’t wait to hang out with them all outside of our usual meeting time slot more often. ^^ Thanks for reading and I hope you enjoyed~ 안녕!!