On Saturday (July 30th, 2016) I spent the first half of my day with my host family or at least half of my host family. At around 10am I left with my host mom and youngest host brother to the Seoul World Cup Stadium (서울월드컵경기장) since the field right next to it is where my youngest host brother practices soccer. (One of the places he practices soccer. He also practices on a private, smaller field with a coach that specifically trains young boys to go professional. It is also a little bit outside of Seoul. I had gone the very first time I went with them to his practices.) During his practice I talked with my host mom on the bleachers (which warranted a lot of stares and questions as everyone around us was wondering why I was with her and how I could understand her.) and we also went to the nearest supermarket and bought food for the upcoming week including more eggs since my host mom makes me eggs for breakfast basically every morning. (On the days she doesnt, my host dad makes me a Korean style breakfast or fried rice. I love his fried rice!) After the soccer practice, we all went home and I took a nap for an hour since I was very tired from the day before. I woke up to my host mom knocking on my door and asking if I was up for going out to lunch with her. My oldest host brother disappeared to another PC방 (PC Room) and my youngest host brother went to go play soccer with some friends in the apartment complex. (The apartment complex had a little soccer field in the middle of it.) I of course agreed to go eat lunch with her. We left the apartment and walked out of the complex. (It was a pretty long walk because the apartment complex is huge!) We walked around trying to find someplace to eat and my host mom kept asking what I wanted to eat and I would just shrug my shoulders and tell her anything is good.

My host mom finally realized I wasn’t going to pick so she picked the restaurant we were going to eat at. The restaurant was called “더 완벽한 김밥” and like the name of the restaurant, the kimbap there is pretty perfect. Kimbap is a Korean dish of steamed rice and various other ingredients (usually cooked meat and vegetables) wrapped in seaweed (김). At this restaurant I had ordered tuna kimbap (I love tuna kimbap! More than any other flavor to be honest.) and my host mom ordered this dish containing mainly buckwheat noodles. 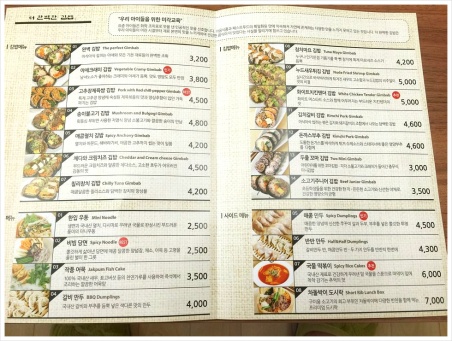 We ate our lunch and when we were done my host mom started calling my host brothers and telling them to come to this restaurant to have some food because she wasn’t gonna cook for them and there was not enough leftovers for the both of them at home. She left to run an errand while I sat in the restaurant with my host brothers while they ate the kimbap they ordered. I talked to them a little bit but they weren’t feeling much conversation while eating. XD We also watched tv in the restaurant and my youngest host brother was freaking out when he saw Donald Trump on the screen. I thought it was interesting that even he knew about Donald Trump and what would soon become the 2016 American Presidential election.

After eating, my host mom took my youngest host brother to his second soccer practice. My host dad was out of the house and my oldest host brother left the restaurant immediately and returned to the PC방. I really wanted to do something fun but so many people were very busy and hanging out with their host family. I contacted Adilene to hang out and we decided to meet up at one of the Hongdae Station exits. We spent an hour walking around Hongdae. Not shopping or eating just talking while exploring parts I hadn’t  been to since they were less busy. Adilene lived in Hongdae so she knew everything well and could show me all the best places. One of things she showed me was a study cafe. Study cafes are basically like libraries but you are allowed to eat and drink inside. The cafe was filled with shelves of book and so many tables and couches and mini reading lamps. It may have been a cafe but it was literally quieter than a library since there wasn’t an area for children. We hung out there before we met up with another Nsliyian named Alethia. For dinner I took them to Kyochon Chicken because I wanted to show everyone how amazing their fried chicken is! We got the normal spicy flavor and it was delicious (though I think the honey one is still #1 for me).

After dinner we headed to a Sulbing which had no seats whatsoever! We stood around on the second floor scouting out any group that was almost done. We also might have glared a bit at this one group of girls that were hogging up seats with their bags while they were also obviously done with their food. Eventually we found three seats and this tiny table for two but we were happy with anything. We ordered Adilene’s favorite flavor of bingsu which is the chocolate brownie bingsu. I was happy with anything. I don’t discriminate when it comes to bingsu flavors.

While we ate our bingsu, we also worked on our end of the program reflection. We would be receiving booklets at the graduation ceremony with everyone’s reflections and obviously we procrastinated. (The due date was the following Monday XD)

It was hard writing the reflection since my brain wasn’t in the reflection mindset. It wasn’t even August and I didn’t want to even think about the program ending yet. Looking back and rereading my reflection, I am not happy with it. Since being back from Seoul, I have realized more things such as how I truly feel about my experience. Maybe I will post my reflection and how I would rewrite it. We will see if I find the courage.

After eating Sulbing, I listened to the other girls talk to me about their NSLI-Y experience so far.  I don’t hang out with the two that often and since we were writing our reflections together, our conversation became pretty deep and sentimental. It was actually a really good conversation and I can say that it is really easy to connect with people if you share similar experiences… for example, being in a foreign country for 6 weeks learning the language and living and interacting with people whom you have never had contact with previously.

After eating at Sulbing, the girls and I moved on to our next location which was a karaoke place near Ewha Womans University (이화여자대학교). Alethia had been to the place with her supporter group that week and said it was a lot of fun. I was beaming with excitement as I had not experienced a Korean 노래방 (Korean for Karaoke room) yet. It took a few wrong turns in order to jog Alethia’s memory but eventually we found the place we were looking for. (It is important to background check Karaoke Rooms. There are some that are a bit sketchy and may not be for just singing. My advice, go by recommendations from local Koreans (host family, supporters, in-country friends etc) or look up reviews on tourism sites. The place had its fee change by the time of day and at 7pm the price was $8 an hour which to me sounded like a pretty good deal. With three people splitting the bill, I only ended up paying $3 or so.

The Karaoke room pretty much looked like how I had imagined it. A dark room with a huge tv hanging on the wall. A soft couch in the middle of the room with a couple of microphones hanging by the tv. There was also two tambourines on this side table that had a menu of drinks and a stand with the wifi password written on it (definitely took advantage of that). Figuring out how to set up the songs was pretty confusing at first. In order to choose a song, you had to use this giant keypad like machine. You could type in the name of the song, album, or artist but figuring out things from there… was pretty confusing. At one point in time I accidently pressed a random button and some text appeared on the screen. I didn’t know how to fix it (or what the text even said) so I had to run out to the front desk and ask the man working to help. (While I was doing that, I realized the room next to us had all these pretty lights flashing around the room. That would have been cool to ask for but by the time he fixed my mistake, the colorful lights had left my mind.)

Photo from Google of the Keypad. Ours was definitely older and had a lot more buttons than the one pictured though.

There is also a giant book with songs you can choose from. They have lots to choose from including music that is not only Korean like American Music and Japanese songs.

So blurry but this was the tv

We sung so many songs! Kpop hits such as BTS’ I Need You, SHINee’s Sherlock, Taeyang’s Eyes, Nose, Lips, and EXO’s Call Me Baby. We also sang some pretty rocking ballads such as That Woman by Baek Jiyoung in which we got 100% ( In South Korea, most Karaoke places have the system set up so that it gives you a grade for your performance. (I honestly think it goes by how loud you are but that is just my observation.) It is a pretty awesome ballad. It is an OST from the really popular Korean drama Secret Garden. Wanna listen to the Song? Click here.

Karaoke was so much fun and I can see why Koreans enjoy the activity so much. It is really fun to be able to sing your favorite songs with your friends with such a production and in a judgement free zone. I could see singing your heart help you feel better on a bad day and just to make your day  fun with some happy moments with friends (or alone!) 😉 I would go to a 노래방 over a bowling alley or roller skating rink any day!

Thanks for reading and I hope you enjoyed this super super long post! Sorry for the lack of pictures, I stopped taking so many as things started becoming so normal and natural and I don’t always wanna bring out my phone, especially when I am with the host fam. I feel more apart of the family when I leave technology at home. ^^ 안녕!