When Sofia and I met up at Apgujeong Rodeo Station (압구정 로데오역) a few days ago to visit some Korean entertainment companies, we passed by this subway station called Seoul Forest. That day, we talked about why that station was named that and so when I got home that day, I researched it. I found out that Seoul Forest is a very very large park located in Seoul that is open year round with no admission fee. The park is split up into 5 sections called Cultural Art Park, Ecological Forest, Nature Experiencing Study Field, Wetlands Ecological Field, and the Han River Waterside Park. The forest is literally huge so we couldn’t go see everything but I will definitely come back here again in the future as the nature was so beautiful (and would probably look even better in fall!) and it was a nice break from the hustle and bustle of the city. So on Sunday (August 7th, 2016), Sofia and I met up at Seoul Forest station. She found a vendor at her local subway station selling 붕어빵 (carp shaped bread) filled with red bean and cream. She brought me some and they were honestly so delicious! I wished my local subway station had vendors! (Mine was too small for that.) Right when we got out of the subway station, we were immediately greeted by a huge sign saying Seoul Forest in Hangul. 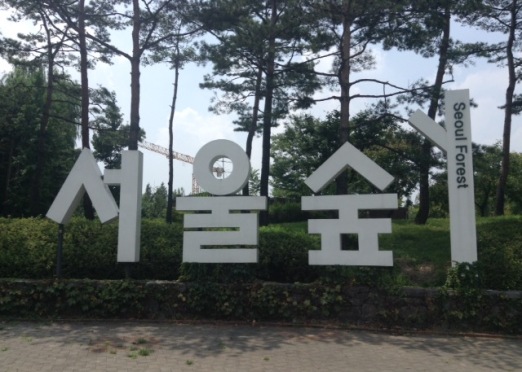 We found a map at the entrance and planned to feed deers and decided everything else we would do inside would be pretty spontaneous. We would just walk around and see what the park had to offer.

Look at all these trees! 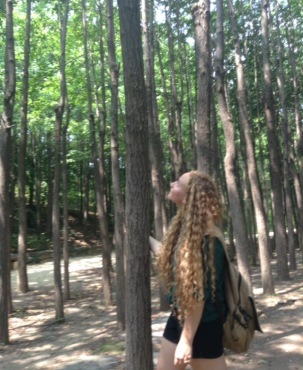 Also, while we were walking around, Sofia and I ran into a group of girls cosplaying Haikyu (Japanese Anime). It is one of my favorites so it was so fun to see all the team members being cosplayed.

The first thing we found was the area where you could feed deers which was my favorite experience of the day! We bought a cup of deer food from a vending machine for 1,000 KRW which was around 80 US cents. Sofia and I both purchased feed and then stood around the fence staring and taking photos of all the deer. There were so many! 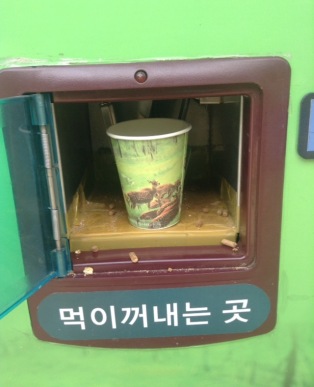 We waited around 2 minutes until the deers started coming closer and closer to us.

I felt kinda bad for them… especially when they were sticking their heads in the fence. It couldn’t have been comfortable.

Feeding the deers, however, was very fun. They were so excited to get food and they would lick our hands while we fed them. It felt like giving treats to an animal whose mouth feels like a mix of a horse and dog. (Does that make any sense? It probably doesn’t haha.) 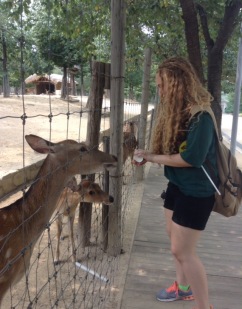 We even fed some baby deers!

After we ran out of feed, we washed our hands in the restroom on site and then continued exploring the park. We found a children playground with this mock rock climbing structure. (It wasn’t rock climbing, however, just planks of wood that you pulled yourself up onto with a rope.) There was also an observatory and some interesting sculptures/structures.

We even found a little wishing pond with these three dishes you could try to throw coins into. We spent quite a long time there since we had soooo many coins and we never use them! (at the least the ones smaller than 5oo) We even made coins into the dishes a couple of times.

We then ran into an insect botanical garden as well as a building filled with animals such as tortoises, crabs, reptilians, different types of fish, and we found a cage of bunnies outside! 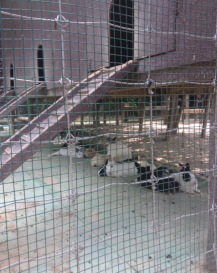 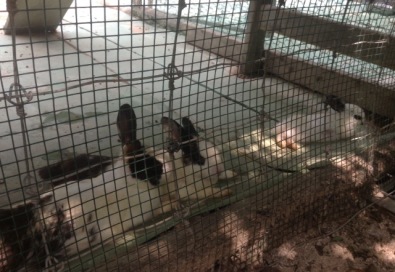 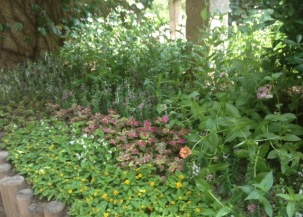 We also found a convenience store in the park which was very convenient as it was very very hot this day and we both had already run out of the water we had purchased in the subway station. (Which was a lot more expensive than what water bottles are usually closer to my host home and university.) We stocked up on more water bottles and we each bought a treat. I purchased a simple milkshake in a bag while Sofia got this very confusing, intricate piña colada type drink. We actually sat at some tables for around three minutes trying to figure out how the drink worked. I read the packaging to Sofia while she worked on trying to figure out how the drink comes out of the straw. In the end we got it to work and Sofia said it was really good. (I didn’t try any though as I don’t like pineapples.)

We the found a community garden with lots of vegetables as well as flowers. I had to take photos of all the sunflowers! They reminded me of my mom since her favorite flowers are sunflowers. 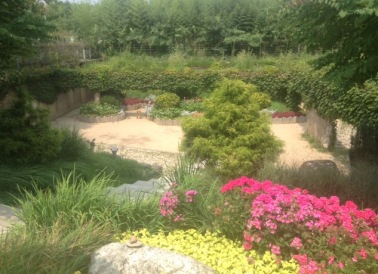 Can you spot the chair in this photo? A Korean woman asked me to take a photo of her and her son on the chair. I don’t know where the chair even came from. 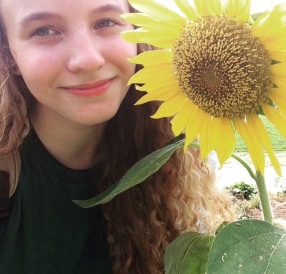 Can’t ever go wrong with a selfie with  sunflower~ 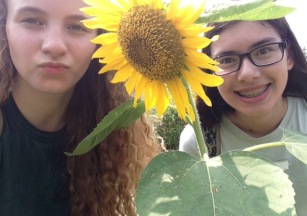 After that, it was getting late and we planned to attend (and help set up) a surprise party for Tucker. We had to grab lunch and then meet up with Adilene (who knew how to get to the location) at Hongdae. Sofia and I stopped at the underground bus terminal to eat some food since we knew they had a wide variety of food to choose from. We also walked around looking for a momento to have our entire 나무반 sign. We found these tree pieces for only $5 each and purchased them. We then started looking for the restaurant that served 삼계탕 (Ginseng Chicken Soup) which we saw last time when we were there but had no luck finding it again. Instead we just went to a Japanese restaurant and had a combo meal of Udon Noodles and Donkatsu. It was very delicious.

After meeting up with Adilene in Hongdae, we took the subway all the way to Tucker’s host mom’s photo studio. His host mom is a photographer mostly for babies and young kids and wow… is she good at it. While we were there we looked at photo books she had with her past work. When we got to the station it felt very different from any subway station I had previously been to. It was so quiet and there were barely any people getting off at the stop. When going up to the exit we had to take an unusual way as most of the escalators had stopped working and were not in use. The view outside of the station was so pretty and the sun was just starting to set for the day. We waited at the exit for a little while until Tuckers host mom came and picked us up for a short 5 minute drive to the studio. 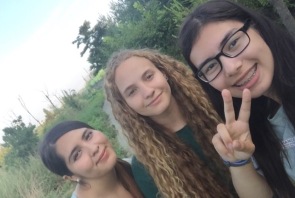 Today was a day filled with nature!

When we got to the photo studio we had to sneak around and enter upstairs in order to make sure that Tucker wouldnt see us as he was watching TV with his host brothers on the first floor of the studio. We scurried up the stairs as quiet as we could and at one point we were afraid that we got caught but it was just Tucker’s host dad. We set up a table in one of the rooms with lots and lots of interesting props. Adilene, Sofia and I just chilled while hanging up birthday decorations as Tucker’s host mom brought in the cake, a platter of shrimp, cookies, and an entire chicken. We moved some chairs around and got a throne ready for the birthday boy. (It wasn’t his actual birthday. It wouldn’t be for another two weeks but we wouldn’t be in Korea when it would occur so the party was being held early.) Finally, it was time to surprise Tucker. We turned the lights off and only had the lights of candles glowing in the room. He walked in and we all yelled HAPPY BIRTHDAY! He could not stop laughing and he had no idea that Sofia and I would be there. 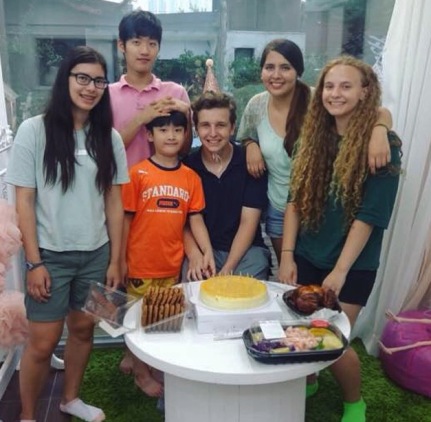 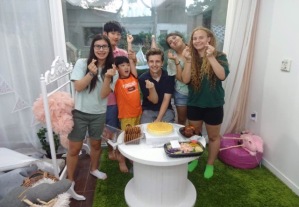 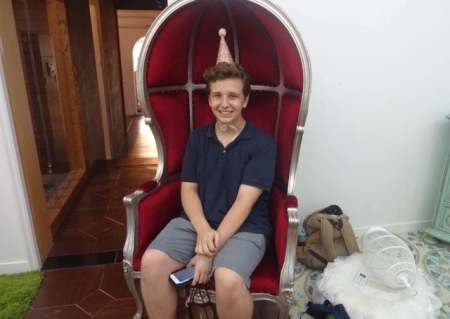 Tucker and his host brother

For dinner we had Korean style 피자 (pizza), 떡볶이 (ddeokbokki), and 쿨피스 (A peach drink that goes really well with spicy food). Our dinner was with Tucker’s host fam and another photographer that worked with his host mom. It was a lot of fun speaking to everyone in Korean and practicing with another family. After dinner we had our own little photoshoot in the various rooms in the photo studio. Tucker and his brother had a mini photoshoot while Adilene got some good shots of Tucker’s host parents. They were very cute. I even got some cute photos from Adilene the upcoming photographer!~

The night ended with all of us hanging out on the balcony of sorts just talking before Tucker’s host dad brought us back to the subway station in his car. We rode down the line together and went our separate ways when the time came. The party was a lot of fun and I really enjoyed celebrating Tucker’s birthday. This trip has actually been full of birthdays! It is actually really nice~ Seoul Forest was also such a good trip. It is something that I would recommend everyone to do if they get a chance to visit Seoul.

Ah I almost forgot! You are probably wondering what Sofia and I got Tucker for his birthday! Well, we first bought him a pair of cooking chopsticks (they are like normal chopsticks but very very long.) They were perfect for him since he is in cooking club. Then we bought him this chopstick resting plate that was shaped like a lizard. He approved of all our gifts.

Thank you for reading all about my Sunday in Seoul. It was actually my last weekend in Seoul and so it was incredibly sad but I believe we spent it very well. I hope you enjoyed~