Saturday (08/13/16) was the last day of my NSLI-Y Korea Summer (Seoul edition) 2016. The day started out bright and early with me waking up to take a shower before all my roommates (and the extra people in the bedroom) woke up. I finished packing all my belongings and sorting through all the thank you letters I had written before any of the girls woke up (which is crazy because if it was any other day of the summer, I would have slept in as long as possible). Room check this morning was hectic as I forgot to put away the gifts so when Maris opened the door for our resident directors, I dashed to the shelves to hide them with my body. They didn’t notice, luckily, though we did get in trouble for allowing Joy, Casey, and Sofia to sleep in our room. Our RDs told us that breakfast was in another room on the floor above us and that we had to bring our bags down to the lobby soon. I got the breakfast for everyone and we were having muffins from Paris Baguette again as well as apple and grape juice.

After we ate breakfast and brought all our suitcases to the lobby, we were given two hours to leave the premises and do whatever we wanted to do before lunch would be served in the hostel. I went off with Sofia, Angie, and Jodi to Myeongdong and explore some more. I was able to get us there quickly as I had just done the same trip the day before.

We stopped at a convenience store (for duh banana milk) and then walked the main shopping streets of Myeongdong. Sofia and I wanted bingsu for the last time but we had no memory of ever seeing a Sulbing in Myeongdong and we were not quite sure what other cafes sold good ones. We then saw Gongcha and decided to get Bingsu from there as we had it before and it was quite unique… like silk bingsu… if that makes any sense (it probably doesn’t). We ordered a Taro Bingsu and I also got the matching bubble tea drink (the last time I would be having both of these lovely foods that summer). Jodi and Angie bought some KFC chicken and brought it on over to us at Gongcha and we all ate together.

We were all alone on the second floor

We also stood and watched some street performances as well. There was a group of three girls and a guy as well as this trio of little girls with their “lead” being a bit older. I want to insert the video footage but my blog, unfortunately, doesn’t support videos. 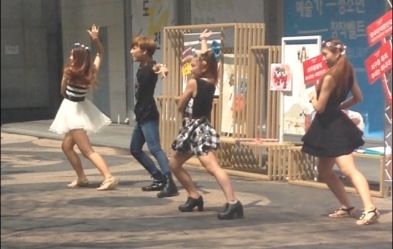 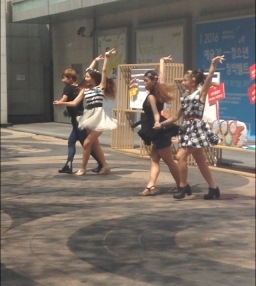 They were really cute!

When we got back to the hostel we got to have lunch. I was really hungry as only having bingsu did not fill me up. I packed a lot of things on my tray but when I sat down to finally eat, I had no appetite whatsoever. I tried eating but I couldn’t. I ended up giving most of my food to my friends and I was only able to stomach the soup and some rice. 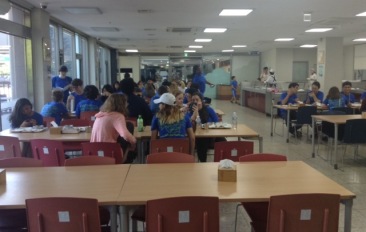 After lunch, we turned in our program phones, phone chargers, and T-Money Cards and then started grabbing our suitcases and getting into one of the two shuttle buses that were waiting outside for us. I didn’t want to sit down in the shuttle so I left my group and my seatmate Sofia and just left to hang out in the lobby with Ari 쌤 until all the NSLI-Y8 kids had retrieved their bags and made their way to their own shuttle bus. Then, it was realized that there were too many bags and they wouldn’t all fit underneath the shuttle bus in the bag compartment. So I helped JT and our program photographer put the extra baggage onto the bus in empty seats. Then, we were on our way.

The shuttle bus ride was sad but also happy as we never failed to make each other laugh even at the grimmest of times. I mostly talked to 나무 (Yves) and Jesse during the ride. We (plus Sofia) started singing our talent show song that even JT sang along and swayed his arms too. One funny conversation from the shuttle ride was when two of the suitcases fell out from the seat and into the aisle. JT exclaims “Where did these come from?” and Sofia (oh the dear friend she is) replies, “You see JT… When two bags love each other very much…” JT laughs and quickly declares “That is against program rules!” And 나무 completely puts us in a laughing fit when he interjects with “It is an extreme sport!” This was so funny to us because, in the many hours of orientation, we learned that any extreme sport (skateboarding, skydiving, rock climbing, etc) were wrong. Inside NSLI-Y joke. One day, I hope you can have the chance to understand 😉 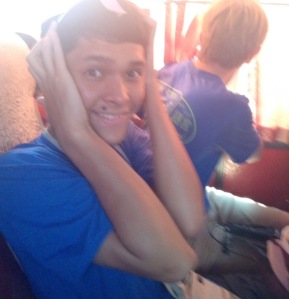 View out the shuttle bus window

We got to the airport and Sofia and I helped unload the suitcases from the shuttle bus. We ended up standing around in the airport for so long while everyone checked their bags and did all the “fun” (HAH) airport stuff. Finally, when everyone’s bags got taken care of, we started moving along. JT came with us all the way to the security line (He would not be going back to Seattle with us; he was going to stay in Seoul.) and read us this long letter from him to us about how thankful he was for this summer. 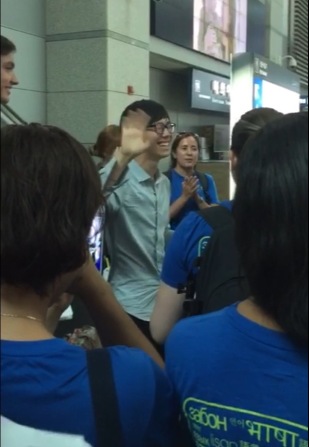 His letter was a TEAR JERKER! I cried so much as it was very cute and really sweet of him to do. (Especially when he said his usual “See You Later” in his British/American/Korean English accent. JT started crying at the end of the letter and Madeline started crying too. They must have gotten so close in Korea… I was last in the security line and I hugged JT and gave him my thank you letter I had written to him. I was crying and so he told me “엠마 울지 말고!” (Emma Don’t Cry) which only made me cry even more. JT continued to tear up and said: “My tears are spicy.” Madeline laughs at this and replies “You mean salty.” JT took off his glasses, wiped his eyes and goes “No, they burn my eyes!”

Waiting to get on the plane to Seattle

The plane ride (as well) was very difficult and sad. The minute the plane took off, I was holding hands with Sofia and we both cried together (as I assume most Nsliyians were doing at that point in time).

But, we made the most of our plane ride (and the last hours I had with my new best friend Sofia). One funny thing that happened was that the flight attendants were speaking Korean and then they heard us speak in Korean as well. One of the flight attendants said, “They understand Korean, better be careful of what we say, ladies.” The plane ride was also spent having a jam session with Sofia and 나무 behind us. We were listening to kidzbop. We whipped and we nae nae’d so hard that we got stares from Koreans (and fellow Nsliyians). Casey judged me A LOT. But if I am being honest, most of the plane ride was sad and mopey. I slept most of the time. When dinner time rolled around, Sofia and I both got 비빔밥. I started crying again when I started eating the bibimbap as It was my first Korean meal and it would be the last (of this trip).

I got the window seat this time around 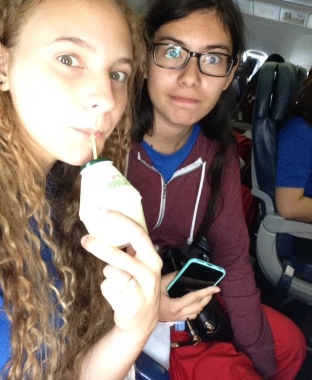 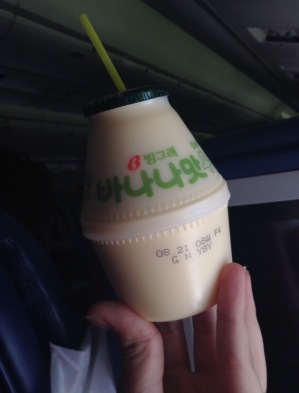 We finally got to Seattle and we actually had gone back in time (It was still August 13th but at the time of arrival, it was around 1pm. Getting through the Seattle airport was pretty messy as our RD had to go back on the plane with a student and everyone was confused, dazed, and feeling down. At one point in time, all the kids flying on Delta were separated from the group and because of this, we were not able to say goodbye fully. No one knew that they would be going somewhere else to get their bags and so it was a very abrupt ending with those Nsliyians (though I did sneak past the security guard and gave a few final hugs especially to Sofia.) However, some of us were able to meet back up at the gates. Once we made past the check in, all the Nsliyians met up in a fast food joint and just hung out together as individuals or groups would leave one by one as their flights took off. I was waiting in the airport with the other Chicago airport Nsliyians for around 4 hours but I valued the extra time with all my friends. I also got to hang out and say goodbye to Madeline one last time (and give her my thank you card). She was also thinking of me as she asked me if I had said goodbye to Sofia properly (as she was a part of the Delta crew) and she looked reassured to know that we got to say goodbye. 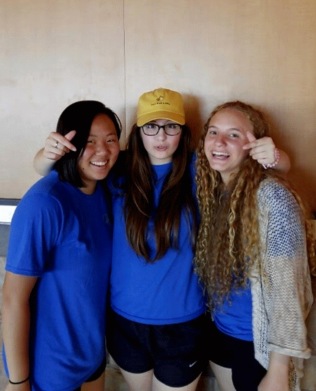 I ended up arriving in Chicago a little bit before midnight. I walked with all the other Chicago/Wisconsin (Angie :P) Nsliyians (Angie, Kyle, and Arjun) to baggage claim. I stood around with Angie and met her parents. We all talked until I saw my mom walk through the doors. I did that thing they do in the movies (basic) and ran to her with tears streaming down my cheek. The ride home was awkward. I sat in the back and everything was completely dark. I tried to stay straight faced and stoic in the back seat but I couldn’t help but tear up when certain memories came into my mind. I arrived home after midnight and my mom gave me some chicken noodle soup. I had trouble eating it because it was so salty. I then went to bed because I needed to get back on a good sleep schedule. I only had the Sunday and Monday to do so because my junior year of high school was starting on Tuesday.

Thanks for reading and I hope you enjoyed reading this sappy, emotional post. Do not forget to subscribe to my blog. I will not be posting any more days in Korea (as I have written about all of them) but I will still be making posts about other opportunities I come across as well as other travel things. I will also still be posting Korea content such as lists, help for future applicants and other sentimental things… You will have to subscribe to see!