你好！This post is a little late… about four months after the Mid-Autumn Festival to be exact. But, I am finally getting around to making this post after collecting all my photos as well as researching more about this Chinese holiday.

So this past summer (2017) I participated in a Startalk program to learn Traditional Chinese. I spent about 5 hours every weekday at a local university learning how to speak, read, and write Chinese for 4 weeks. Startalk’s mission is to increase the number of U.S. citizens speaking critical languages, and it is funded by the National Security Agency (NSA). This summer was a blast, and I made a lot of really good friends from different high schools all around me. In order to keep us engaged with Chinese and to allow our classes to “stay” together, the director of my local Chinese Startalk program planned a reunion for the students. We would be celebrating the Mid-Autumn Festival– eating delicious food, learning about the holiday, refreshing our Chinese skills, and just hanging out with friends we haven’t seen in awhile.

The Mid-Autumn Festival is a harvest festival that gets its name from (you guessed it!) the fact that it is usually in the middle of autumn. (The festival takes place on the 15th day of the 8th month according to the Chinese calendar.) The Chinese celebrate this festival by having dinner with family, playing with lanterns, flying lanterns, worshiping the moon, and more. And of course, food is plentiful!

We celebrated the Mid-Autumn Festival and had our reunion on October 7th, 2017 (Saturday). This date, inconveniently, was the same day I took my SAT Subject tests. Therefore, I was a little late to the festivities because I had to deal with SAT Spanish and SAT Literature and when I did get to Lewis University, my classmates were playing games to refresh our memories on Chinese and practice new words and phrases.

So happy to see everyone again!!! ❤ 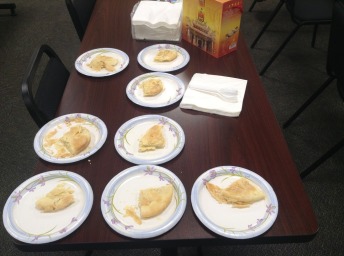 Before I arrived, my classmates had eaten these flaky, sweet pastries. I later learned that these pastries were Taiwanese Sun Cakes, and they were very delicious!~

To practice out Chinese, we played this game that was very similar to Charades. We were given slips of paper (2 or 3 each) which had vocabulary words written on them. We had to get up in front of everyone and act out the word without any sounds. If someone guessed it, then both the guesser and the actor would get a point. (Points were important because there were “prizes” to be given out!) It was a lot of fun and Bruce acting out “Mother” will always be my favorite thing! XD

After games, we had our Mid-Autumn Festival feast! (Which was what everyone was looking forward to~) 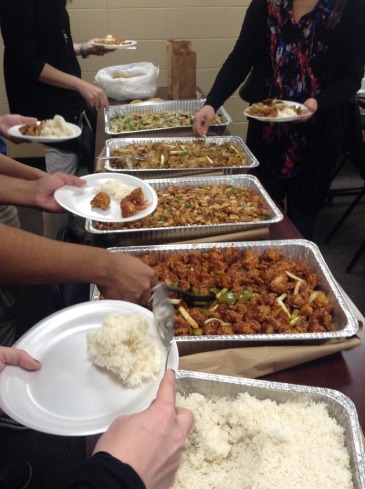 They got SOOO much food catered! It was crazy to see so much food for not that many Chinese students. (Lucky for the director, high school students know how to eat XD) 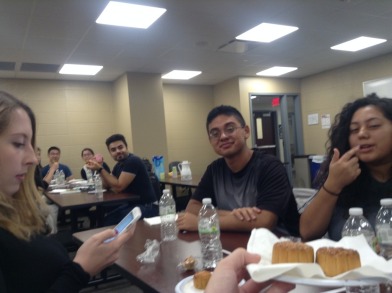 Not every student was able to make it

However it was still very nice to catch up with everyone (and talk to those who I did not have a chance to during the summer).

Reunion photo with Class 2’s teacher (My class’s teacher was busy :/) and the director of the program (and my professor for my online Chinese course at Lewis).

After dinner we learned about (and obviously ate) Mooncakes which are traditional Chinese pastries eaten during the Mid-Autumn Festival. Mooncakes are usually circular or square in shape with a pastry exterior and a sweet filling. There are many things that are used in the filling for the Mooncakes: Lotus seed paste, fruits, red bean, nuts, dates, etc. Mooncakes are very popular and are often offered as gifts to family, coworkers, and friends during the Mid-Autumn Festival. 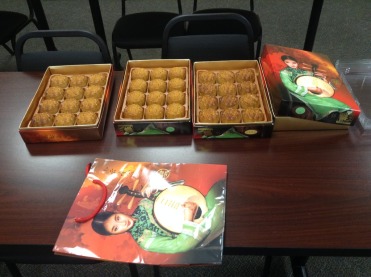 The Mooncakes were purchased in gift boxes because of how often they are given as gifts.

Mooncakes often have really intricate details on the outside!

Our director purchased two types of Mooncakes: The first having pineapple filling and the second having a filling made out of dates. Mooncakes can be considered an acquired taste. Some of my classmates were not fond of the taste or texture or both. However, I found them really tasty! (Even though I had never even eaten dates before this day!)

After we stuffed ourselves with all the Chinese food we could get our hands on, it was time to start wrapping up the reunion. Throughout the day we were accumulating points if we had won any of the games in order to pick prizes at the end. (Those with the most points got to pick first and then so on down the line.) Unfortunately, because I was the last student to show up (As if the SAT Subject Tests were not bad enough! haha jk…), I had the lowest amount of points which meant I was to pick last. I received an American candy bar XD It was still greatly appreciated, however. (Though I definitely had enough to eat already!) But there were some really great prizes: Chinese textbooks, Chinese books, Chinese music CD’s, Taiwanese scarfs, and notebooks.

The biggest prize of all (at least for me) was the fact that the director of Startalk needed to get rid of all the leftover food so we were allowed to take home as much as we liked. So, of course, I made myself a nice plate for dinner. 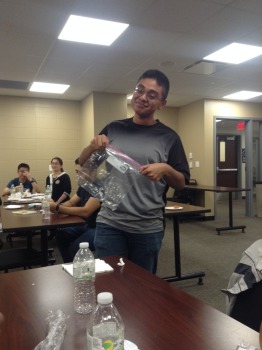 Sam getting his Ziploc bag for leftovers ready! 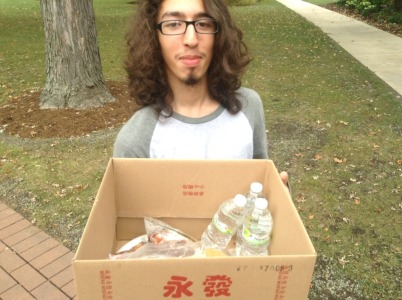 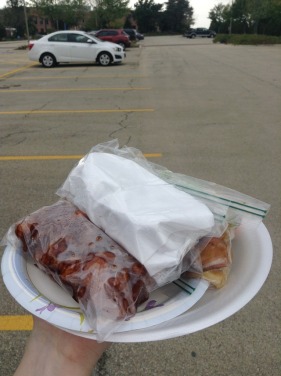 My dinner for the night XD 谢谢老师!～ ❤

And that was my Startalk’s class reunion for the Mid-Autumn Festival! It was a lot of fun to come back together since we had not seen each other for almost an entire 3 months. Additionally, I was talking to my Chinese professor a couple weeks ago, and she is trying to have another reunion in February for Chinese New Year!~ I am excited to see what she plans for that! (This reunion happened today: February 17th) I will write a blog about that soon!~ 谢谢！再见～