你好！My Startalk Chinese class came back together today in order to celebrate Chinese New Year~ I carpooled with my friend Becca, and we were both super excited to see our classmates again. The director of the Startalk program planned this reunion at a Chinese Restaurant about 30 minutes from where I live. And, wow, it was so crowded. There were so many families and couples there. The line was out the door! I guess this place is a crowd favorite for ringing in the New Year!~

10/10 I would definitely recommend! 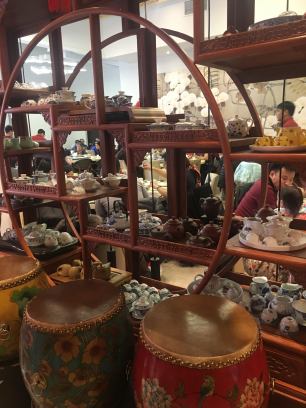 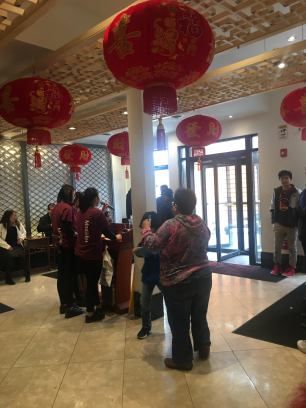 Becca and I were the first people to arrive so we met 胡老師 and her husband at the front of the restaurant until they could clear a table for us.

We started off the afternoon with a little test. Our director gave us four slips of paper and we were told to write down four characters to then be placed in a box. The director would pull random slips out throughout the lunch, and the winners would receive small prizes: candies and pastries. Then, before we started eating, 胡老師 taught us how to say “Happy New Year” in Chinese.

Becca, Citlali, Adrienne, and I

We also learned a lot about Chinese New Year. This year, Chinese New Year starts on February 16th which officially begins the year of the dog! (My zodiac sign is a rabbit~) Many people ring in the new year by cleaning their entire house and by decorating it with lanterns, calligraphy, and posters with poetic verses. Homes are filled with a lot of red! And on New Year’s Eve, families have reunion dinners– kind of like the one we were all having together! 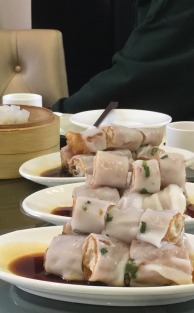 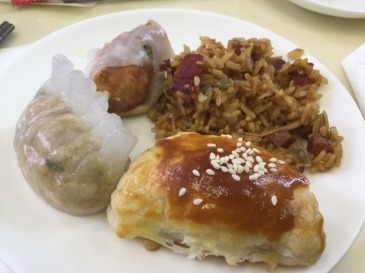 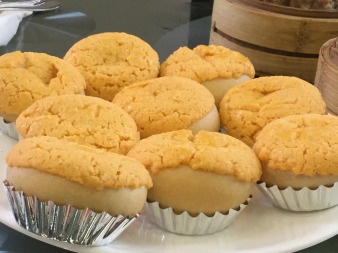 For dessert, we had these pastries with filling that was made partially from egg yolks

After eating, we played a couple of more games to try to earn points for prizes. We were taught the characters for Happy New Year and then we were given them, shuffled, and had to put the characters in order the fastest. We also played this game that involved our director holding up a piece of paper with a number (in Chinese characters of course) and then we had to quickly write a sentence in Chinese with the same number of characters. It was intense! 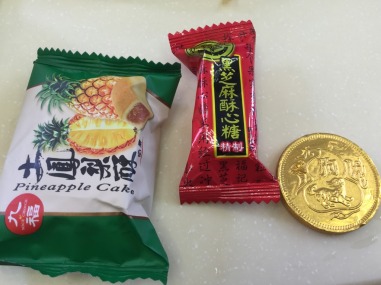 Prizes for winning the games!

Our director gave us training chopsticks shaped like ninjas. XD She told us that her 20 year old son can’t even use chopsticks! Fortunately, I do not need them, but they are adorable!

Lastly, 胡老師 talked to us about red envelopes during Chinese New Year. They are red packets filled with money given to kids, family members, friends, and coworkers to wish them a good new year and lots of luck. It is custom that once you get married, you should start giving out red envelopes. Our director all gave us “symbolic” red envelopes each holding one dollar. She explained to us that the tradition started off with small amounts of money but now, the custom has become more costly for the givers. (Especially when it comes to family members having to give money to the children in the family.)

1. Accept the envelope with both hands 2. Give a greeting and express thanks 3. DON’T open the envelope in front of the giver!

At the end of the reunion, we took some group photos together and the individuals with the most points were able to choose a prize. There were so many prizes: Chinese coin purses, t-shirts, Chinese candy, chopstick sets, etc. I picked out this gorgeous set with 4 chopsticks and 4 chopstick rests~

The Startalk Director (and my Chinese professor) with Becca and me~ ❤

And that was all for our reunion! It was a lot of fun being able to see all my classmates again (and eat some really delicious foods). Today has really motivated me to get back into my Chinese studies! It was nice being able to use it with everybody. Currently, I’m hoping to be a student helper alongside my director during this summer’s Startalk program! (Because I am too old to actually partake in it once again) I also found out that Lewis University’s Startalk is adding Russian this summer! How cool is that?!?! We will see how my summer plans work out 😉 Thank you for reading! 謝謝！再見！