The first full day of PDO (at least for the New NSLI-Yians) started bright and early. After breakfast, presentations of all different types were scheduled from 9 am onward.

Ready for a long day of presentations!!! 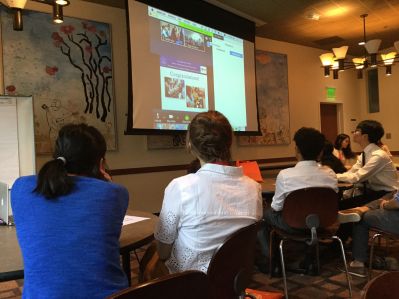 After the presentation from the Department of State, we began a session called “The Intentional Language Learner” which focused on how to set goals, manage expectations, as well as general NSLI-Y goals regarding language acquisition. 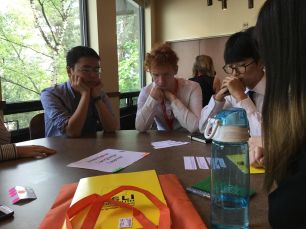 The students shared their “Smart” Goals which were prepped before they arrived at PDO. They were told to try to make goals for their program that followed the SMART acronym.

Ligaya then went over the OPI scale. Before we headed out for lunch, the students were allowed to check their OPI scores with their resident director Minjeong. iEarn discussed reasonable expectations for language skill improvement. According to iEarn, a student that began at novice low succeeded in reaching the program’s expectations if they were able to reach novice high– anything above that was surpassing expectations. They also made sure to let students know that the higher a student places on the OPI scale pre-program, the fewer levels they will probably move up/ are expected to move up.

The second session of the day was “The Flexible & Open-Minded Cultural Explorer” Minjeong went over culture shock and how to deal with it as well as Mental Health while abroad.

We liked to call this the Stress Tornado

Shown in the picture above is the NSLI-Y students playing this game that I really can only describe as a demonstration of differing perspectives and cultures. Each student was given a slip of paper and on that paper, there was a statement that revealed a pet peeve or something the individual should now consider disrespectful. For example, some slips of paper may have said “Not making eye contact” or “fidgeting” or “interrupting.” Each student was also given a pile of toothpicks to hand out to the other students they interact with if they do anything that does against the statement on their slip of paper.

The NSLI-Y students walked around having conversations and handed out toothpicks to their partners. Each individual was supposed to try to figure out what the other partner had as their “pet peeve.” Some were easier to guess than others–especially when there were certain statements that were about such subtle, natural things like fidgeting or playing with one’s hair. This activity was done to showcase and highlight the subtleties of different cultures and interactions between people in different societies. It made the students more aware of themselves within a larger entity.

After this activity, we moved on to lunch and the final three sessions of the presentation day: The Model Citizen Ambassador, The Safe & Savy Traveler, and The Thoughtful & Engaged Host Student. 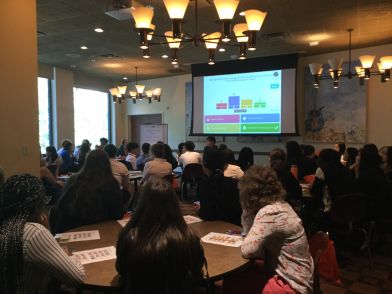 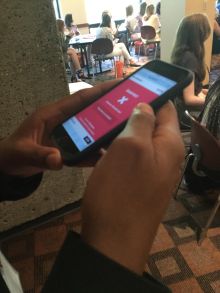 I love Kahoot! We did not play this during my PDO 😛

Alicia (American RD) went over the program rules, expectations, as well as how communication will work during the program. After we discussed everything about safety and security, we played a Kahoot game. It was actually really fun seeing everyone being so competitive in order to win. (Dio also took out his phone to play… but let us just say we probably disappointed the iEarn staff with our low place… XD )

One thing that I thought went really well was the conversation the staff led about preventing sexual abuse and harassment. They went through a presentation slideshow on signs of sexual abuse (what is okay or not okay) as well as ways to report it.

We also discussed being homosexual in Korea and the stigma that can revolve around that. I know during my summer PDO, we glossed over this topic. We only had a small booklet about it that was given to us before the program.

We also talked about race in Korea. We discussed Korean beauty standards that praise pale skin and how that can cause stigma against darker skin tones. These discussions were very compelling to be a part of, and I was happy that the RDs took the time to bring awareness to these taboo topics rather than push it under the rug for the students to figure out along the way on the program. 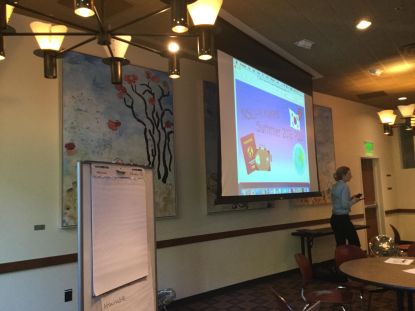 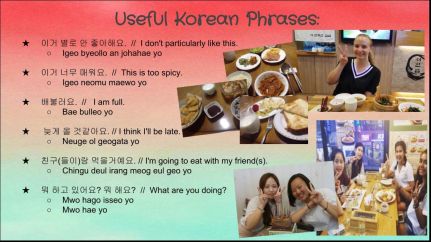 After all the presentations, it was 5pm which means dinner time! I ended up going with Dio to take a group of students to the University District so that they could grab some food (Though I went with Alice and Calista back to the university to eat dinner at the cafeteria because it was free!) 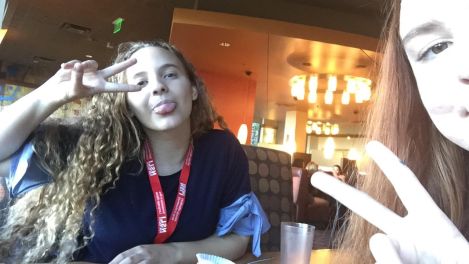 The view from the cafeteria! Wowww

After dinner, Alice and I walked around campus and got some more ice cream because why not! We saved money on our dinner 😉

Alicia (the resident director) decided that the students would spend their final night at PDO watching a Korean drama together! She hooked up her laptop to the TV in the lounge and played the first episode of a really old Korean drama that was not popular– but it was hilarious! We all sat on the floor or couches wearing our pajamas enjoying this show. I thought it was such a cute bonding gesture between the RD and her students. It was a nice way to end the night! 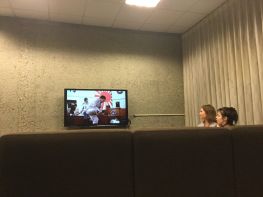 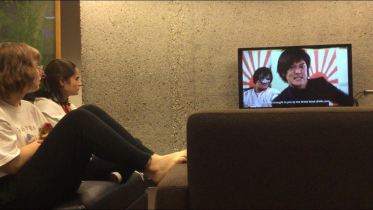 After the drama, Dio and I did some room checks which meant making sure everyone was in their designated room by 10 pm. I checked about 12 rooms for the girls while Dio checked all the boys’ rooms. Dio joked about him being really good at room checks and that it was a sign that he would be a good resident director too. I laughed at the idea (jk I love you Dio ❤ haha)

Today was the day the NSLI-Y Summer 10 kids would be flying off to Seoul, South Korea! In the morning we were to meet in the lobby right after breakfast at 8 am; however, we ended up counting the group several times because a couple of people were missing. They were three of the NSLI-Y students and Dio. By 8:15 am Minjeong is getting upset and asking me where Dio was. I messaged him on KakaoTalk and I was like “Dio, where are you?” And he all casually goes “In my room… why?”

But do not worry, he made it down with the other boys in less than 5 minutes. I just laughed at the thought of him being a resident director that is always late. 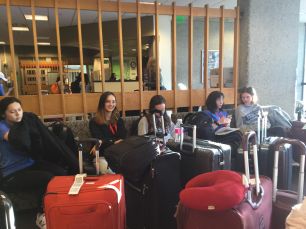 They were so excited!!~

We took a large shuttle bus to the airport (all 55 of us) and arrived about 3ish hours earlier than the flight just because getting a large group through an airport and security can be tough. It also gave the students enough time to grab some snacks or an early lunch at the airport if they so chose to.

I sat by Dio and we talked the entire way~

We played games to pass the time and I talked to a lot of the students (especially Alice and Dio because I am going to miss them!)

Eventually, it was time to say Goodbye to the students as they embarked on their journey!

Honestly, seeing them all file into the plane was pretty bittersweet (there were tears! From me!) This sight reminded me so much of my NSLI-Y experience and I could not help but think back to the feelings I had when I was traveling to Korea. This reminded me of how fulfilled I felt getting on the plane after grueling over the application and waiting to apply since I was in the 7th grade and first discovered NSLI-Y. Luckily, I could remind myself of the fact that I will return to South Korea, in September even. 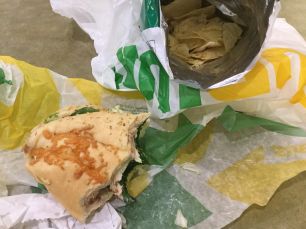 After the students left, I hung out with Signe, Ligaya, and Dio until it was time for me to hop on a plane back to Chicago. We got dinner at the airport and just chatted about all sorts of things. We (Dio and I) also tried to teach Signe and Ligaya some letters of the Korean alphabet. They learned pretty fast! And I hope one day they learn Hangul completely. 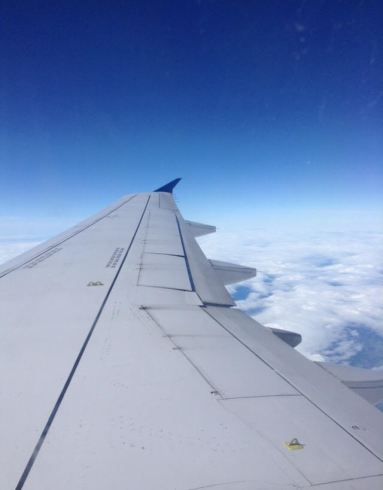 This actually has nothing to do with this post but when I arrived back home, I had a lovely package waiting for me from American Councils:

Back in May, Shraddha (NSLI-Y Alum Rep –> Here is her Blog) held a NSLI-Y trivia competition through Kahoot for NSLI-Y alumni and finalists. I, of course, had to participate (rather than study for AP Gov test the following day). But also, I asked her if I could participate so it was not unfair~ And, by some stroke of luck, I ended up winning! So as my prize, I got a NSLI-Y waterbottle (a nice addition to my thermos ^^)

And that is all for this blog post! My next few blog posts will most likely be about information regarding my NSLI-Y AY program (host school and host family announcements) as well as my last couple events as an alumni representative. Look forward to those! Until next time~ 다음에 봐요!