Today was a pretty chill day, just a relaxing Saturday. The morning was spent doing homework, hanging out with my host sisters, and talking with my host mom. For breakfast, we had 콩나물국 (bean sprout soup), 밥 (rice), and 생선 (fish). During breakfast, my host mom told me about someone that she talked to {not exactly sure the relation} who has a 15-year-old daughter that would be willing to pay me to speak English to her and have an English meeting either at their house or a cafe. Honestly, the proposition sounds amazing~ I would love another way to make money while I’m here. I don’t know if I’ll have time… that’s the thing. If it’s on weekdays, I could maybe do it on days with no Korean class. I’ll have time on most weekends but do I want to spend my free time tutoring? I don’t know… but if it is only like an hour, that would not be too much of an infringement.

Anyways, after breakfast, I continued to talk to my host mom as we both enjoyed some tea. I usually don’t drink tea at home but when she asked, I said yes because I wanted to spend the time with her.

The rest of the early afternoon was spent studying. I know boring boring boring! However, I need to study plenty before Monday cause I have a quiz. Plus, I’m just behind in general in so many aspects.

Lunch was 칼국수 (noodle soup) which was delicious. My favorite food is definitely noodles— all day every day. I don’t discriminate against noodles.

A little bit after 3 pm, we left the house to go to the housewarming party for my host dad’s colleague. We drove for an hour and 30 minutes… it was pretty far away. 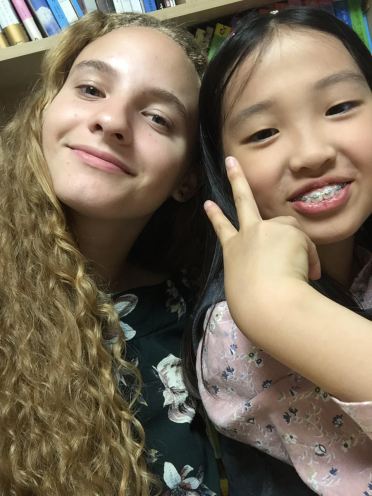 When we got to their apartment complex, I was in awe. It was so big and beautiful! The playgrounds for the kids were even ornate! Wow! The couple we were visiting also had two children— twin 5-year-old girls. They were very adorable. When I walked in, I immediately greeted everyone but they didn’t pay much attention to me which is a good thing too I guess?

We hung out around the house for a while which was pretty awkward. Like yes, it’s not my home but it’s also the home of someone who doesn’t even know me so I was a bit anxious. I hung out in the “library room” with my host sisters. They read the books they brought while I wrote blog posts and studied a bit of Korean.

Dinner time rolled around, and I was seated at the adult table. And to be honest, I have no idea what we were eating. I know one of the dishes was a type of raw fish. There were also spring rolls made with crab and pepper and these deep-fried things? I only had one and couldn’t tell if it was meat or not? Maybe it is a Chinese dish?

My host dad asked me to introduce myself to the group while my host mom hyped me up saying I’m good at Korean and I’m like what??? No, I’m not! I quickly introduced myself and then almost struggled to answer “Where in the US are you from?” The guy that asked simply said it in a different way than I’m used to so I felt pretty stupid when it took me an extra couple of seconds to spit out an answer. I hate when I can’t even answer questions that I should understand… moments like these make me think that my Korean will never improve.

After dinner, I went with my host sisters and the twin girls to the park inside the apartment complex. Chasing them while they rode their scooters was tough work! And one of the girls, the older of the twins, fell off her scooter and wailed to no end. I immediately ran over to her and carried her, tried to bounce her up and down and make her feel better. Eventually, she stopped crying because she wanted to play and not go inside. The rest of their playtime consisted of collecting leaves and shining the phone light on them because they were “cold.” Too precious. 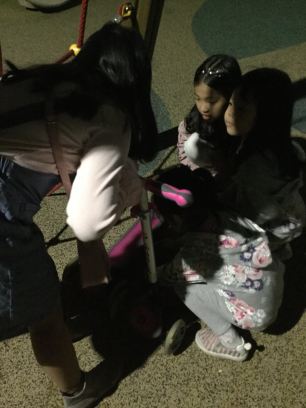 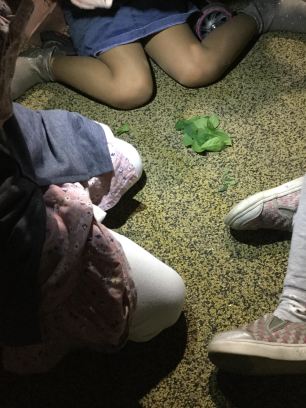 The rest of the time at the party was spent with me and my host sister moving around the house together, being a bit bored. We took some selfies on Snow and made this video on this Korean app of us two. 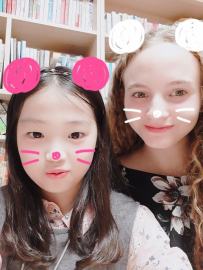 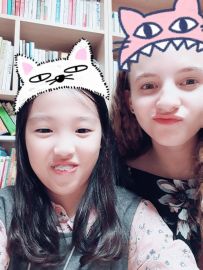 We sang Happy Birthday to my host dad and ate an ice cream cake because apparently, his birthday is on Monday?!? I love that they waited to tell me two days before… it’s okay. I asked my host mom what his favorite dessert was and she said cheesecake, so I’m gonna try to get that for him~ {After class on Monday I think!} 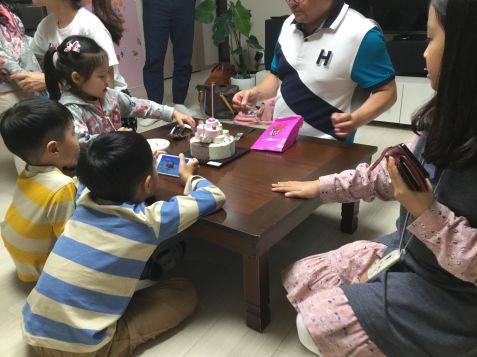 We got home at almost 11 pm and I worked on my workbook pages till about midnight. {Glad I got them all done!} So tomorrow will just be focusing on my writing, studying for my quiz, and memorizing vocab~

That’s all for this blog post~ I hope you enjoyed!