Saturday morning and afternoon were pretty relaxing. I spent those several hours getting ready for the day, studying Korean, making Quizlets, working on blog posts, and hanging out with my host siblings. I helped out my eldest host sister with her English vocab words (She had a test on Monday so I helped her memorize the definitions and spellings of her assigned words.) and played some board games with her. My host siblings also showed me their new collection of white worms?? (larva possibly?) They collected them from these chestnuts that my host brother found in the park with my host dad. My host sister showed me that if the chestnut had a hole on the side, it was probably housing a worm. They put them in plastic cups with dirt and are now raising them on the balcony– quite odd but cute. 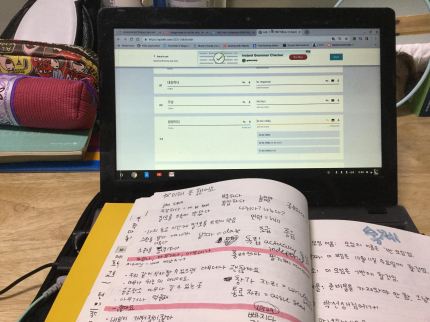 At night, my host family and I went out to watch a movie! We went to see Christopher Robin (Or in Korean they call it by the name 곰돌이 푸 which translates to Teddy Bear Pooh). I was thankful that we were watching an English movie because though I would have still enjoyed the movie regardless of whatever language it was shown in, I was thankful that I could understand everything. (Also, reading the Korean subtitles was fun and good practice. And it was interesting to see how certain things were translated.) 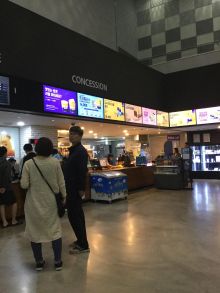 The movie was really cute. Winnie the Pooh said the most adorable things that also turned out to be deep and thought-provoking and I teared up so many times throughout the duration of the movie! I just could relate it to my life now (especially to exchange life and being away from my family) which made it so special. And although this is a family movie, I believe that adults will truly get more out of it as they will understand the message more. 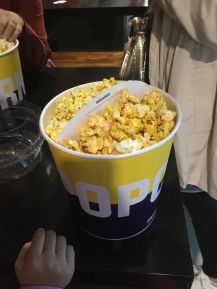 Flea Markets. What an interesting word and concept. I would look up the meaning behind why these type of sales are named after a bug, but I’m on a subway car right now so no WiFi. Maybe when I’m editing this? {Okay I looked it up. It apparently comes from a market in France that sold second-hand, antique items that often contained fleas.} 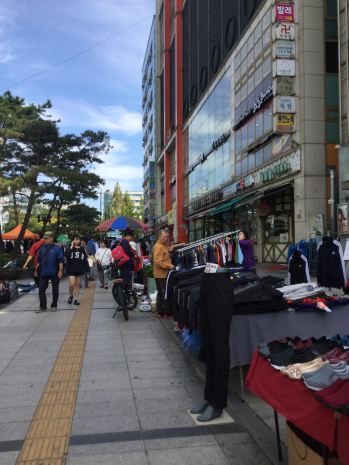 I’ve never been to a flea market but mostly because I live in a pretty small town. When anyone has ever wanted to sell something, they simply had a garage sale in front of their house. I went to the flea market with my host sisters and had a good time seeing what was there. A lot of stuff you’d expect at garage sales: used clothes, books, toys, life products. However, there were also people selling new things like cleaning supplies, hair accessories, and stationery. 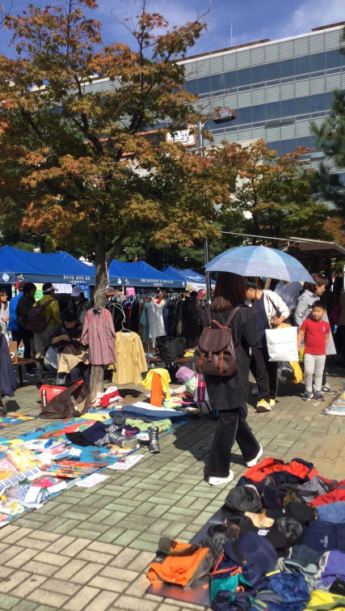 While we were walking around, all eyes were on me as I was probably the only foreigner within many mile radii of that market. {I can say this because I live in 고양시, not 서울.} This one woman tried pulling me aside and started basically interrogating me in Korean. First, she asked me if my host sisters were my daughters. I was shocked! I know that Koreans tend to believe that foreigners {particularly non-Asian foreigners} are a lot older than they actually are, but I feel like I look pretty young compared to my other peers. Do I look old enough to have two 10-year-old daughters? Do I look thirty?!?

We came home after buying some mechanical pencils {which in Korean are 샤프} and a toy for my host brother.

After the flea market, we left to go fishing soon after. I was pretty confused as to what we were doing as no one had really explained it to me. I just saw bags with food and other items being packed and knew that we were going somewhere. Our drive was about an hour long and when we arrived I knew we weren’t in 서울 anymore because of the welcome lions on this one bridge. At the time, I didn’t realize that we were actually driving onto an island of 인천 (Incheon) to go fishing. I didn’t realize this was the plan until I started seeing all these stores saying “낚시 슈퍼” (fishing supermarket) and when my host dad stopped at one and came back with live bait and 고구마–sweet potato {not fishing related exactly— we all just wanted a snack.} 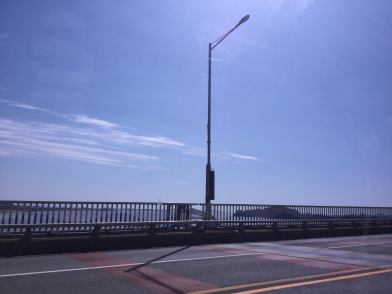 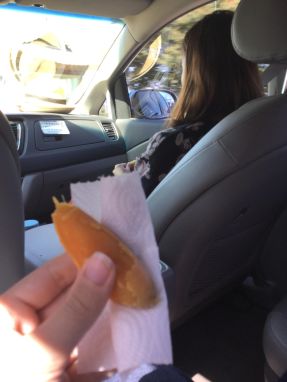 When we got to the fishing location, it was this cliff that jutted over a muddy, clay beach of sorts. We set up camp— kinda literally because we had a tent— and then my host dad and brother began fishing. I just lied in the tent with my host sisters and goofed around.

During one part of our excursion, my host sisters and I walked past some of the other fishers and realized that they had actually caught fish while we were empty-handed {basketed? There goes my English…} When my host sister told my dad of this fact, his face immediately turned sour. I felt bad that there was just some serious bad luck on our side of the water.

We ate 라면 and 김밥 in our tent which was a lot of fun! My host mom pulled out her portable stove top and boiled water for the instant ramen bowls. We sat together and enjoyed the natural views and good food while slurping up unhealthy, msg filled noodles.

We came home around 6 pm and I immediately began doing my homework— a presentation for Korean class about my favorite present {that I received}. At first, I was going to go with a physical gift but then realized that my presentation wouldn’t include as many good grammar or vocabulary words so I went with something more metaphorical. This way my presentation wouldn’t sound like child’s play in comparison to Jacqueline’s and Josh’s and I would also be able to learn useful vocab. {For example, I learned the word for education (교육) and to accomplish your dreams (꿈을 이루어지다)} When I finished the presentation, I was really proud of it~ I will describe more about it on the blog post from the day I present it. 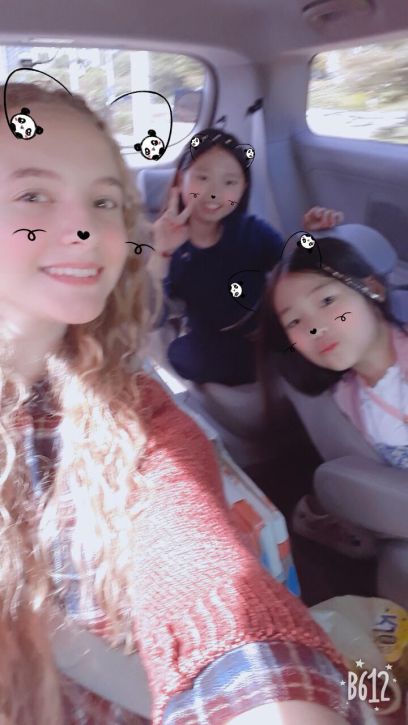 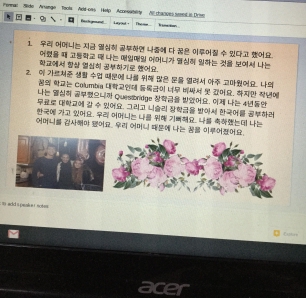 So that was my weekend with my host family~ I really enjoyed it. I had great conversations with my host mom and bonded more with my siblings {especially my host brother!}

Hmmm, did I not mention the incident? {that word has a negative connotation but I can’t think of another word to use so} My youngest host sister went to a birthday party on Saturday and returned in time for dinner and to go to the movies. At the party, she made these cute sugar cookies out of different colored dough. She gave each of us two cookies, but my host brother was not in the room when I received mine. When he got his cookie, he exclaimed: “Emma 누나 needs one!” And that might as well have just melted my heart.

Okay, that is all for this blog post~ I hope you enjoyed~ I ended up putting Saturday and Sunday into one post because my Saturday blog was pretty short as the day was not the most eventful. I believe that this will happen occasionally when I don’t have fun things planned with friends or my host family/ when I start getting into a daily routine of school, class, home– the works/when I am not rambling about my emotions or things that seem mundane to the majority (like the cookie story told above). But hey if you are up for that, follow my blog for more!~