Today was a Monday–the dreaded day– but I had no school! 하나고 was giving their students the day off (probably to study), so that meant I had a four day weekend (because I would also have Tuesday off for 한글날–Korean Alphabet Day). I still woke up early with my host sisters because I planned to meet Katie in 홍대 early in order to eat some street waffles and study a bit at a cafe before Korean class. We WANTED to eat some waffles (we have been craving them for a while); however, most Korean restaurants, cafes, street carts, etc all open pretty late– compared to US standards, at least. They usually open at 11 am… 10:30 am if you are lucky!

We walked around the streets of 홍대 for a while and it was pretty strange because no one was there. All the clothing shops and food stalls were closed, so Katie and I simply looked at closed doors and chatted about how badly we wanted waffles– especially when we passed by the waffle stalls with the ice cream scoops but saw that they were unfortunately closed. 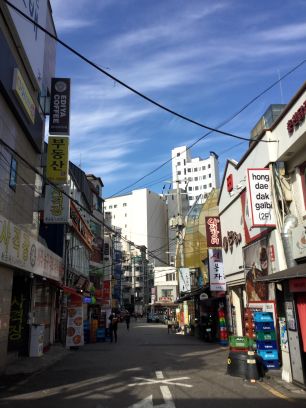 Eventually, we found a cafe to go to called 빵꼬마 (Bread Comma) which is a cafe that also serves bread. Two in one: cafe and a bakery. It was pretty pricey, to be honest, but the atmosphere was nice and the cafe itself was very aesthetically pleasing. Katie and I both ordered straight up coffee drinks which were so bitter, and we could not find any sugar. They were not good. I still do not stan coffee. At the cafe, I practiced my presentation and studied vocabulary words on Quizlet while Katie also studied her stuff too. 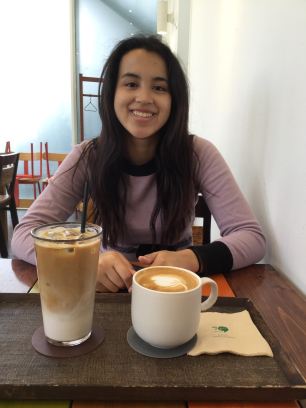 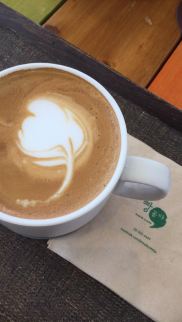 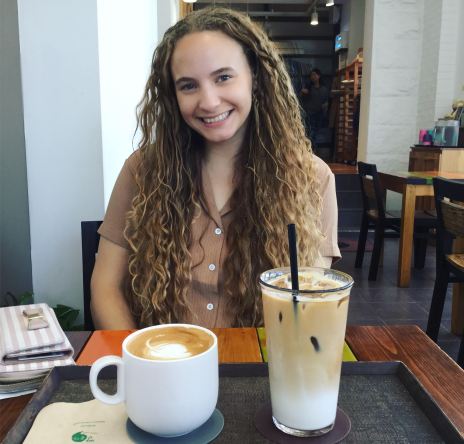 After studying, Katie and I met up with Kaitlyn at one of the subway exits in order to get lunch together. Kaitlyn was going to take us to this very famous (and cheap) 돈까스 (pork cutlet) place but it was closed!! I learned this day that a lot of places in Korea are actually closed on Mondays. (And I am not quite sure why?) We felt defeated so we left the more touristy and popular area of 홍대 to walk towards the Better World office because they have a lot of 분식점s (Snack Bar/Cheap Restaurant serving Korean comfort food) that have really cheap food like 돈까스 (pork cutlet), 라면 (ramen), 김밥 (kimbap), etc. We found one but there was absolutely no room in there for us so we kept walking another 5 minutes till we finally found another one that had the room. The restaurant was called 김밥 세상 (Kimbap World). I really enjoyed their name choice.

Today, Korean class consisted of our present presentations (ugh I hate how those two words look and sound right next to each other…) and some really hard grammar that was difficult for me to grasp. 민정쌤 actually sat in on our class during the second hour (I guess to evaluate our teacher?) and so she sat through my presentation. That made me feel ten times more nervous! Ahhhhh Though, I think that I did pretty well. I presented about the life lessons that my mom taught me and how those were the gifts that I cherish the most. In particular, I talked about how she taught me the importance of education and effort. Within this presentation, I was able to discuss my mom’s past and then how she pushed me to do my best in school which enabled me to be successful/ have these doors opened for me. I also added that I would continue to value these things and use them as motivation for future endeavors.

When Korean class ended, Jacquelyn, Josh, and I had to quickly walk over to the youth center to meet up with the other NSLI-Yians because we were having our bi-weekly meeting. The cafe that they originally planned to have the meeting at was closed. (What did I tell you? Mondays!) We walked over to Holly’s cafe and all 16 of us fit ourselves into that tiny cafe; I still do not really know how. Better World allowed us to order a drink (on them), so I tried out a drink that I normally would not order– because of its price to be honest. I had a Belgian Hot Chocolate which was amazing! Like drinking melted chocolate~

During the meeting, 민정쌤 had us fill out applications for our Alien Registration Cards because we would need to apply for those soon because it would be illegal for us to not have them on our body at all times. (I believe 민정쌤 said you need one if you plan to stay in Korea longer than 6 months.) We are all going to get our cards on different days and at different locations depending on where we lived (I would be going by myself with 민정쌤 as I am the only student living in 고양시. The 인천 girls are all going together and there will be two groups of 서울 students. I was also going to be the first person to be receiving theirs. (I will be going next week!) After the meeting, I did not want to go home but everyone either had plans with their host family already or they wanted to get home in time for dinner. However, Kaitlyn saved the day and said she would hang out with me and get dinner too. McKenzie also tagged along for a bit before going back to her home for dinner with her host family.

Kaitlyn, McKenzie, and I first went to Morning Glory–a stationary story–to look around and possibly buy cute stationery? I ended getting one of those pens that have like 4 colors because all the students at 하나고 seem to have them and I want to fit in! (Just in kidding, I did want one, though.) Plus, it was only like 70 cents so a deal!

We also came across a snack shop and I found 찰떡파이 which is this delicious chocolate covered rice cake that Josh introduced to me in Korean class the other day and I went to three different convenience store locations trying to find them! Finally, I did! Ahaha McKenzie left for her home after we walked around for a bit so then Kaitlyn and I began our search for some street food. We were not entirely hungry so we figured some street food for dinner and dessert would be good enough. 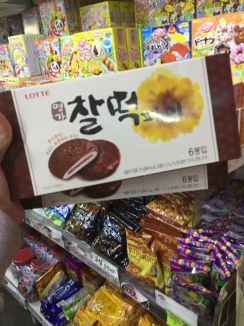 I got to try Takoyaki (Octopus Balls– dough shaped balls with diced octopus inside) for the first time ever and it was delicious! We got the cheese version but the cheese was just a sauce… not really a fan. I would get it again but just the original flavor. For dessert, we split a chocolate cream cheese waffle (I did get my waffle!) and a 32cm ice cream cone. Very delicious.

After getting home, I played a board game with my host sister for a bit, took a shower, and hopped straight into bed. I really did no studying besides making a Quizlet for vocab words. I just needed to rest~ It was a very good yet tiring day.

I hope you enjoyed this blog post~Till next time!