I woke up this morning feeling very groggy and wishing that I didn’t have to wake up at 6 am for school. It was cold in my room because I left my window open and the last thing I wanted to do was slip out of my comfy pajamas into tights, a skirt, and a button-down dress shirt— not the desired fit.

I was halfway to the station when I realized that I forgot the umbrella Katie and I borrowed from one of the teachers. I ran back silently cursing my life to grab the umbrella. When I came back inside the house, my mom was shocked again and said “What?!?” I quickly explained about the umbrella and said goodbye to her for the second time that morning. I missed the earlier train and took the next outbound train that came less than 10 minutes later. I felt bad for making Katie wait but she promised it wasn’t a big deal. I was able to get WiFi and text her at the station so she knew I was going to be late.

She also had a very rough morning that consisted of her losing the bow to our uniform at the convenience store. It was definitely a day… if that makes any sense to anyone.

School itself wasn’t bad. I made it out to seem very difficult today but academically, we did basically nothing. Because their midterms are so soon, most classes are either reviewing or allowing students to 자습 or self-study. My first period was economics and when I first walked in, there was a coat next to my friend 세림 {one of the only “friend” friends I’ve made so far} and I got sad. I assumed that I would just sit next to someone random—have no interaction because they would be studying or sleeping—and call it a day. However, 세림 called over to me and showed me that she put her jacket there to save me a spot! I couldn’t have felt more grateful at that moment.

During class, she studied economics while I self-studied Korean. She would whisper some things now and then to me and during the break, we talked for a bit. Just about my Korean studies and her feelings towards 하나고 and the exams closely approaching. 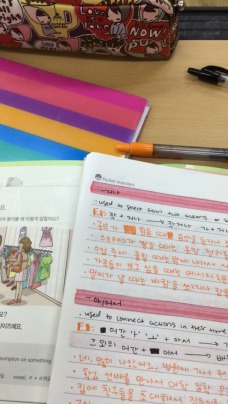 I self-studied the previous 이화 textbook in order to catch up to my classmates since I skipped learning most of those grammar points.

After economics, I had Korean history. Because we didn’t have school last Wednesday, it was my first time having the class! In the class, I sat down next to a girl from my homeroom {I need to get her name again~ I have her Kakao talk but her name isn’t attached to it!} and my teacher asked me a couple questions. He told me that they were gonna review for the first half of class so I was free to study Korean. And I’m so glad he said that because it gave me something to do because I knew I would understand nothing in that class. Mostly because that teacher talks so fast! Faster than anyone I’ve ever met! Including me, my mom, and my Abuelo and we are Cuban! He was like speaking at Auctioneer speed; it was crazy. {I also had no book so how could I follow along?}

During the break time, I met up with Katie because we wanted to visit the 매점 together but when we got there it was soooo crowded so we got overwhelmed and just left empty handed. We will try {and succeed} another time. Also, while I returned to my seat and continued studying Korean, my Korean history teacher complimented my Korean handwriting saying it was pretty. I was like no way and then he proceeds to say that it is better than many in the class, I laughed.

Before lunch, 도윤 had to finish up something so she couldn’t meet us for lunch until 20 minutes in, so Katie, 서린, and I stole a practice room near the music classroom to just goof off in. Katie {who is actually musically talented} played the piano and sang to us for a bit. I also told them about my run-in with a cult {and that’s where I actually learned the word 사이비.} The rest of the time was spent with us laughing, being awkward, and listening to the boys scream-singing in the practice room next to us. Good times indeed. 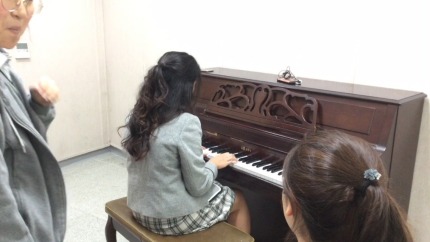 During lunch, we taught each other slang. Katie and I tried to explain Lit and Yeet but the girls had trouble pronouncing it and understanding the meanings. I feel like a lot of American slang is just hard to explain {especially in Korean} and that’s why when parents try to use, it is so awkward because they simply don’t know the situations that they apply to. They also taught us some Korean slang but because they were not written down, I forgot all of them but 띠용 which they told me meant awkward but my host mom later said it meant surprise? It’s like the noise that happens when a cartoon character’s eyes pop out? I’m not sure… I’ll have to look into that.

Either way, lunch was a lot of fun! And the food was very delicious. I had AP Stats next And was dreading the class. I hated Stats in America and nothing has changed since landing in Korea. But I was looking forward to being able to talk to 세림 again~ When I sat down next to her after lunch, I told her I learned about 띠용 and she laughed. She said that if I used it with other people, they would be really surprised. {I know I would too if I heard a Korean high school student saying yeet or lit in the hallways.} During class, our teacher reviewed the concept of hypothesis tests which again, is not a new thing to me but I don’t remember everything and sometimes the different Korean notation throws me off. Additionally, we were learned about a type of test and I thought it was something I had never seen before; however, turns out that it was just called something different in the States.

During the break time, my teacher came over to me to explain that I needed a textbook and that soon we would be using these three computer programs {I only recognized Java I think?} so I needed to hurry up and get the required class materials. I was just a bit disappointed that my teacher was actually going to make me do work… oh boy. Time to email my old AP Stats teacher.

On Wednesdays, of certain weeks, our last period class consists of our mandatory club. (At 하나고 students are required to partake in one mandatory club during school hours and then they are allowed to have a maximum of two other clubs.) However, because it is Midterm season, club activities will not resume until next month. I have yet to know what clubs I will be joining but as soon as I find out, I will share~ I met up with Katie after this class and told her that we could go, that the school day was over. We walked around the school for a bit wondering if we should leave or not and instead of being smart and asking our coordinator teacher, we just left. I trusted 세림 who asked me if I was going home now and all the kids seemed like they were done for the day–if that makes any sense. They were eating ice cream! Who would do that between classes? Why ruin the taste of perfectly sweet ice cream with having to hurry off to class? That would leave a bad taste in my mouth for sure. So we left school.

We walked across the street to a Twosome Cafe and spent about an hour and a half chilling, studying, drinking lattes, and enjoying a cake? (I use the question mark because it really was not a cake but a cream souffle looking thing… I forgot the name but it was delicious!) When we ordered our drinks, a different staff member helped us out. She took one look at us in our uniforms and asked us if we were 하나고 students. She proceeds to tell us that we speak Korean well. They were really nice and maybe since we will be regulars (Katie and I are going to make this cafe-meeting-to-eat-cake-and-reflect/rant-about-our-week a regular thing), we can get to know them more? That would be cool. 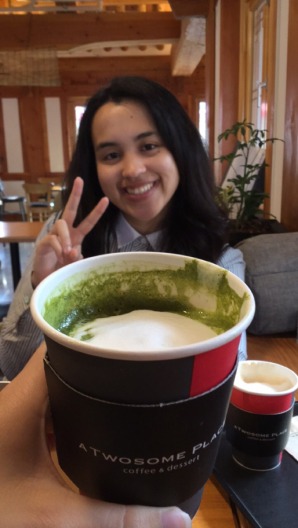 After the cafe, I went home and ate dinner with my host family. I studied vocab words from my textbook and then words I was simply curious about or heard in class but I did not know the meaning of at the time. I talked with my host mom for a while after dinner which is honestly one of the best parts of the day. It allows me to reflect, practice my Korean with my family, and overall bond more with them. That is why I think that coming home for dinner is so important!

You know it is a good day when your mom sends you a pack of Kakao emojis as a gift!!!~ ❤

I have been trying to not eat out with friends too often because I value dinner time~ I am going to aim for eating dinner out 3 times a week or less! (Though more often than not it will be less because school and Korean class will only continue to be exhausting and difficult physically and mentally.)

That is all for this blog post! I hope you enjoyed~ Thanks! Till next time~