I really have no pictures from this day… besides the random screenshots of my home screen that my phones seems to keep taking as of late. {I really should get my phone fixed…} But today was still a good day, so I want to remember it! I will just quickly describe today’s happenings and simply combine it with another day.

Most of my morning was spent chilling around the house. I woke up and wrote a blog post out in the living room while my host sister watched an episode of Victorious. After we all had breakfast together, I got ready for the day and quietly studied grammar in my room {I used our extra grammar book and took notes on all the points from the last two chapters}.

Later in the day, I went biking around the neighborhood with my youngest host sister. We talked about school and her favorite things. {including slime which is just as big of an obsession here as it is for kids in America—maybe even more? But I might think that because I’m surrounded by it all while in America I wasn’t around many kids.} We also walked to Olive Young together and I had to show her where to go because she began to walk in the opposite direction of the subway station. At Olive Young, my host sister needed to by shaving cream and 리뉴 which is a cleaner of sorts I think? For contacts maybe? However, my host sister couldn’t find them so we kept wandering around the store. Eventually, I asked her if she wanted me to ask one of the employees and she shook her head to say yes, so I ended up asking the employees where to find both of the products. I’m such a good big sister! Hah

Views! I took this while riding my bike!

The rest of the night was characterized by more studying. It really wasn’t that eventful… I just needed to get the tricky new grammar points down. Next week we have our huge test over the whole book. I’m extremely nervous because our quizzes as of late don’t seem to be too hard. Usually, they are just filling in blanks with vocab words and then filling in blanks with grammar points. In the beginning, she gave no word banks which made everything quite difficult but as of the last two tests, she’s been giving them to us which has made them easier. So I wonder if our test is going to be all like that? I doubt it… there will probably be some writing involved… and reading sections? I would expect that.

But that was my day~ I went to bed early to make getting up the next day for school a bit easier. After being spoiled with a week off, I’m not sure how I am going to survive this entire week!

Once again, I don’t really have any pictures of this day in my camera roll. It was just a day that followed a basic routine that will most definitely become more apparent in my blogs very soon {on school days at least}.

I went to homeroom class in the morning and tried to make conversation but everyone is so tired in the morning (and I’m still being too shy…) It’s something I’m working on, don’t worry. Afterward, I had 영미문학 (American and British Literature) which is quickly becoming my favorite class—mostly because I can understand what is going on in that class and participate. I’m not bored or confused like during my other classes. Currently, they are reading Exit West but I haven’t gotten a copy of the book yet so I just spark noted the chapter they were supposed to read up to so I could follow along in class. In class, we read some sections of the book and answered discussion questions. It was actually a lot of fun! Especially because our teacher makes jokes! There was one point where he scurried around the front of the room sniffing like a dog to illustrate something and another time when he blatantly made fun of his lack of math skills. He really makes the class more enjoyable because of that. He also knows how to add to things to make them funny. For example, 예성, the student next to me, read a line from the book that said “whiskey from Ireland” and our teacher just casually retorts with “As all whiskey should.” All the students couldn’t help but laugh {Maybe this is a more you-had-to-be-there-moment.}

During class, we had this group activity that involved discussing ideas from chapter 3. Our teacher tells everyone to pair up in groups of 2-3. I purposely sat down next to these three girls when I first walked into the classroom and I see them creating a circle with their desks as he says this. My heart immediately drops. I look around worried that I won’t have anyone to partner with—feeling quite lonely. Luckily for me, 예성 decides to take one for the team and asks me if I want to be his partner: I was so grateful! I could have joined the group with his buddies and left me in the dust but instead, he chose to not make me deal with awkwardly asking another group if I could be their third member. Our discussion was really fun. We analyzed the book while also just chatting with each other about other topics {Shhh don’t tell Andrew}.

While talking, this giant bug crawled onto my desk. I looked at it but didn’t shriek as I didn’t want to cause a commotion in the class. 예성 saw it and tried swatting it off the table but it just dodged his hand and crawled closer to me. Andrew noticed us, after the girl next to me shrieked, and grabbed me some tissues to kill it with. With one swoop, I crushed the bug and just handed it to the teacher. I assumed he’d throw it away but he just placed it on top of his podium for the time being. I couldn’t help but laugh. That definitely woke me up if I wasn’t already. (Looking back, I realize it was because Korean classrooms (at least at 하나고) do not have trash bins!)

My second {and last} class of the day was Statistics which was honestly very depressing. I was so lost and confused the whole time. My friend 세림 sat next to me and helped me with the problems we were working on and tried to explain everything the teacher said more slowly {and sometimes in English}. I feel like I am such a burden to her… she could be focusing on her own work but instead, she has to help me. I couldn’t be more grateful for her though. In Statistics, we are using this computer program called R studio to CODE! I’ve taken AP Statistics in America but I’ve never coded in my life! No formal or informal training here! I have to figure out what I’m doing, catch up with the class, and learn how to code listening to Korean instructions. This is cool in theory but it literally took me 75 minutes to do two problems… I got assigned about 10-12 for homework. I’m stressing really badly.

Once Statistics was over, I was so happy to hop on over to lunch and then go to Korean class—leaving 하나고 behind me for the day. Katie and I ate by ourselves which was kind of awkward; however, we are each other’s best friends so I didn’t really mind. We left lunch earlier than usual so that we could stop at the market in front of the subway station and pick up some 호떡 from a vendor. I think the lady we went to changes it up as this time, she was selling 녹차 호떡 which were delicious!

Korean class today was pretty difficult. I didn’t understand a lot of the textbook unrelated conversations and the vocabulary words in my notebook were nearly all left undefined. It is so hard being at a different level than the rest of your classmates because you feel so stupid when you cannot understand concepts that seem to be familiar to them. After class, I walked over to CYC with the rest of my classmates to have our bi-weekly meeting. 민정쌤 is using these meetings as a way to check up on everyone and inform us of any important information. This time, we talked about applying for our alien registration cards (done for me~) as well as our cultural activity on Saturday to 서대문형무소역사관. After the meeting, I stayed behind to have 민정 choose my vocab words for the night and she took one look at them before saying that this class must have been hard. All I could say was yes, yes it was. 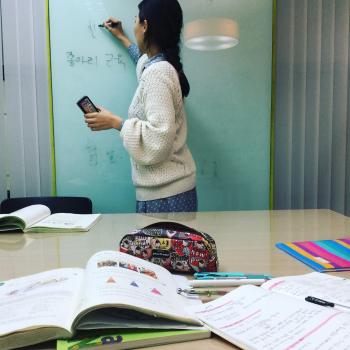 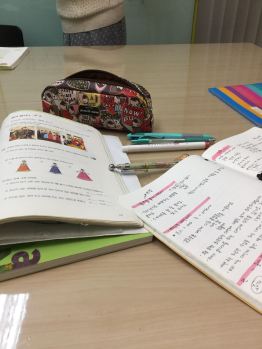 I went with Katie, June, and Jenna to a bakery so that Jenna could buy her host family some cake; however, we all could not enter a bakery without buying anything… so Katie and I shared a bag of soft chocolate cookies while June bought this HUGE bagel. It actually looked so good! I could definitely come back and study there with some nice bread to snack on. Before heading home, I picked up some goldfish because I wanted to make myself feel better by stuffing myself with a snack that feels like home–AKA comfort food. (Who would have thought goldfish could be considered a comfort food?)

At night, I ate dinner with just my host sister as everyone else had already eaten. I did an entire chapter of my workbook and made a quizlet set (but did not end up studying it). I was too exhausted to do much else after that, so I laid in bed and watched Youtube till I fell asleep. So that was my day! I am still feeling very stressed about school and Korean class… hopefully, these negative emotions can start turning to at least neutral ones? That would be appreciated… Thanks for reading~ Do not forget to subscribe!