Friday was a very exhausting but eventful day. I had so much fun and was happy to be surrounded by so many people~ In the morning, I had Philosophy. Seeing that I can’t understand ANYTHING that happens in class, it’s really hard for me not to fall asleep— and the other students have their own reasons… because barely anyone’s head is ever off of their desks. Our teacher noticed all of the sleeping students and the tired faces on the individuals being strong and let us have an extra 20 minutes to sleep before the break time which was nice. I literally fell asleep, no joke. When I woke up, I had lines on my face! That is when you know you took a good power nap!

Economics was a very fun class today! The first period was simply spent with the teacher lecturing about inflation, monetary theory, etc; however, our teacher took us outside of school during the second period! We got to leave 하나고 and take a long scenic walk to a 편의점 a bit of a way away. While walking there, I got to talk to 세림 and two other girls from the class {forgot their names >~<}. At the store, everyone was stocking up on ramen and any of the hot snacks sold there because it wasn’t readily available at the school. {Ramen is not allowed in school. Since it’s not sold at the 매점, the students have no way of getting it without sneaking it in.} My teacher wanted to treat 세림 and me to snacks, so she had us pick out something to eat. {She ending up choosing by giving us her recommendations.} We had Powerades, this corn chip {a turtle is the mascot}, and three chocolate filled circular cookie things? Honestly, these snacks are hard to describe… 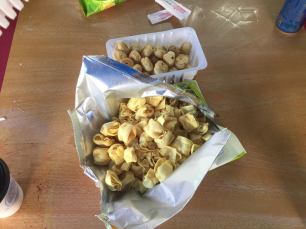 While we ate, I got to really speak Korean to my Economics teacher and she was so shook. She literally did not think I understood anything at all. 세림 told her and the other girls that if they talk slow, that I can understand most things. I am so grateful for her! I also showed them pics of my dog! Gotta show him off when I can.

Our teacher gave me the remaining snack to bring back and share with Katie {and that I did. We ate it while waiting for the bus back to 연신내역 that afternoon.}

At the start of lunch, I met up with all of our friends and Katie as usual. However, when 혜지 got there, she shouts Happy Birthday! I thanked her but told her that today was not my birthday. Then, I thought back to the morning. After my homeroom class, she came up to me and showed me a message she wrote for me on her phone. I only got a couple lines in before {she realized her mistake and} pulled away. Though I knew something was going on, I had no idea that everyone was going to surprise me with gifts and sing to me during lunch time! I didn’t even have time to eat lunch to be honest. They sang happy birthday to me and the others in the lunchroom also sang along and at the end of the song, a lot of people clapped for me. I was so embarrassed but also extremely thankful to have found such a good group of friends~~~ 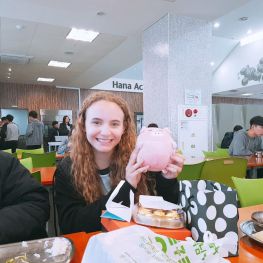 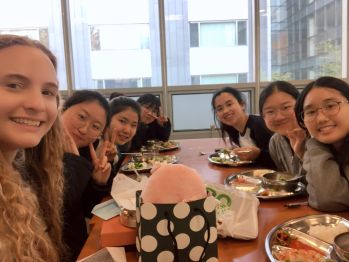 I received so many snacks {Though it’s been a week; many of them have been eaten already} and cute thoughtful cards. 서린 gave me a music cd filled with children songs sung by her and her little sister. This is hilarious to me and I will always treasure it~ 도윤 went all out and got me Ferrero Rocher Truffles! They were too bougie for me to eat in America nonetheless find them in Korea! (Turns out, they are actually really common here and not too expensive!) Katie was also super sweet and got me this adorable pig stuffed animal. {She listens when I talk; my favorite animal is a pig!}

After lunch, Sociology was a mess. Didn’t understand anything !!! Though, my seat partner 선민 tried to explain things to me {it was a futile effort}. But the mentoring program afterward was a lot of fun! I got to talk to three girls (주연, 지은, and 규원) about the music industry {comparisons between our two countries} and we also talked about the difference in getting into college. I also taught them some slang words {Lit & Rip} which will be an ongoing segment during our meetings!

The last class of the day was English Literature and we just had a “discussion” on our book. {I put discussion in quotation marks because Korean teaching styles are pretty different and so although Andrew tries to make things like they would be in an American school system, the kids just don’t grasp onto the concept fully} I didn’t have my book… I did not really participate.

At the end of the day, Katie and I played a risky game with the time. I really wanted to go home and change before my homeroom’s meeting {because I knew we would be leaving the school} and I forgot to bring a change of clothes. So Katie and I went to my host family’s home so quickly. We literally ran to my house and I changed in around 5 minutes. We calculated all the times correctly and the bus schedule was in our favor so we made it back to 하나고 with perfect timing: Katie needed to be there by 6 while I had till 6:15 pm.

When we got to school, Katie deserted me when her homeroom teacher showed up and took her to the place her class was having their meeting. I went outside to wait alone at my class’s meeting place. I got there so early; therefore, I had to wait in the dark all alone. Another class was meeting up at the stairs and they were just staring at me. Two buses pulled up to drop off students {I guess they went somewhere after school} and it was so awkward having them all stare at me as they walked out. 호영 from my mentorship program saw me and was like “엠마있다” {It’s Emma}. I said hello to him and returned to my awkward stance of pacing around the front of the school all lonely like. Eventually, some girls from my homeroom came outside and told me to wait inside with them and one of the girls I’m closer with in my homeroom showed up to save me—as she started talking to me.

While waiting for 민정쌤 to show up to school and while taking the bus to 연신내역 {my normal commute and what I did three times already that day!} I got to talk to some classmates— specifically 지현. I am so grateful to her~ She really helps me not feel so lonely.

For dinner, we went to an all you can eat meat restaurant. I sat at a grill with 민정쌤 and 지현. We talked a lot and I was happy to be included! We also ate so much food and it was so delicious! Also, right before we left, the whole class sang a quick happy birthday to me. It was unexpected but very appreciated. After dinner {which we didn’t have to pay for. Thank you 민정쌤 or some mysterious part of 하나고’s administration for paying for the meal!!–haha just kidding. I had to pay for it a week later.}, we went to see a movie: 완벽한타인. This movie is a Korean Comedy following a group of friends/couples that play a game during a housewarming party. It’s very funny and the twists that happened were so good! I missed a lot of things, yes, but I understood the main and most important parts so I was able to follow along with the plot and the message. It was such a good movie! I’m serious! I really want to watch it again at the end of the program to see how much more I can understand.

At the end of the movie, everyone kept coming up to me asking if I understood it. Once I told them I did, they all tried to reassure me that this wasn’t Korean culture— that it wasn’t universal. I couldn’t help but laugh at what they thought I would get from the movie. I mean, it is a valid worry. Many people use media {or can only use media} as their only source of information for some cultures.

Though I really enjoyed both the dinner and movie, my favorite parts of the night were the conversations I had which may seem insignificant in the grand scheme of things but it’s the truth. Also, after dinner, we were pretty late to the showing of the movie that we rented so we ran all the way from the meat restaurant to the movie theater. I was running {something I don’t do} through the streets with my classmates and honestly, it felt like I was in a teen movie. All around me people stopped and stared but we were all set on seeing that movie so we ran. Out of breath, but not stopping to take breaks, we dodged people and cars until we finally had to climb several flights of stairs to get to the right theater. It was such a blast. I will always remember it~

I separated from my homeroom class at the subway station. I went home via train back to 고양시 while they took the bus back to 하나고. I got home a lot later than I usually do. My entire host family was already asleep and the lights were all off. I headed to bed right away because I was also very tired. The next morning was our second ever cultural excursion which meant an early wake-up time!

I hope you enjoyed this blog post! Thank you for reading~~ ^^