Saturday morning was very relaxing. I stayed in my pajamas till late and just worked on Korean homework, a project I’m doing with iEarn {I’m going to be doing a webinar with them and Josh about Citizen Ambassadorship} and watched TV with my host sisters. My host family left in the early afternoon for a famous lake park nearby, so I had the house to myself for the couple hours before I left for my dinner plans. I would have gone with them but I knew I wouldn’t be back in time, and I still needed to get ready for the day and do a load of laundry {that was desperately needed} so I couldn’t go with them. 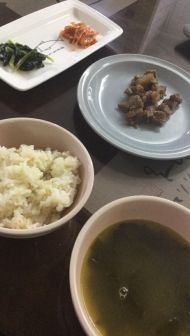 I met up with Katie at Holly’s cafe around 5 pm so that we could both get some more work done—but together. I got a green tea latte as per usual. I answered my emails and began finding photos for the promotion of our webinar via social media. 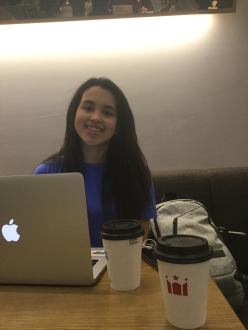 My love at Hollys ❤

At 6 pm, I ran off to meet Alix and Shannon so that we could go shopping around the station. We went to a book store where I finally bought this Korean essay book that I’ve had my eye on for a while. {It was a birthday gift to me!} And I also picked up treat bags and a birthday bag for 서린 because her birthday would be that coming Monday. While I was getting that, Alix and Shannon bought miscellaneous items including two birthday hats for me and Addie to wear during dinner. {Addie’s birthday was the 28th so we were also celebrating her 19th.} 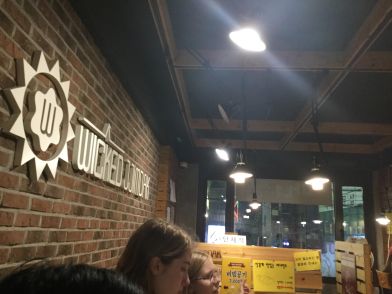 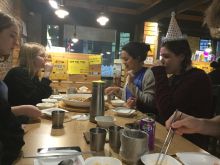 For dinner, a big group of 12 NSLI-Y students went to Wicked 찜닭 recommended by Kaitlyn. It was very delicious~ I sat at a table with Liam, Jacquelyn, and Kaitlyn and we ordered a 4 person serving {which we feared would be too much after seeing the portion} but thanks to Liam especially, we were able to finish everything. This was only my second time having 찜닭 and I do have to admit that it is probably one of my favorite Korean dishes! 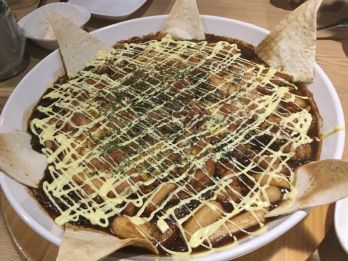 찜닭: Meat & veggies marinated in a sweet and savory sauce! 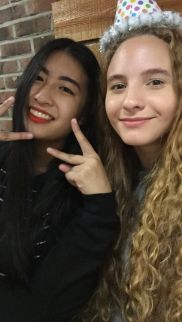 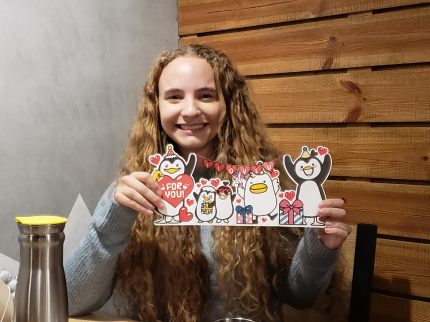 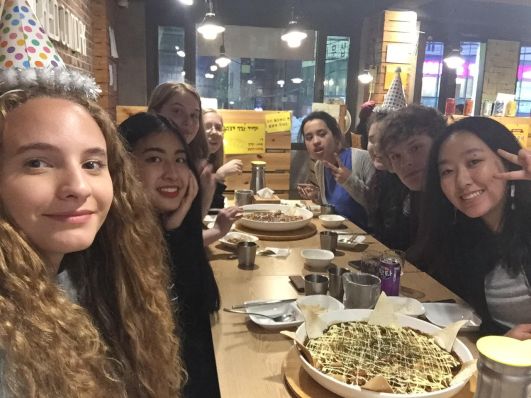 After dinner, we all kind of split up and went our own separate ways. Some went home, others went to grab dessert, etc. I went with Kaitlyn, Liam, Jack, Josh, and Jacquelyn to walk around 홍대 and chat while watching some of the buskers. Since Liam recently hurt his foot/ankle pretty badly, he hobbles while he walks now. So jack being the gentleman that he is, carried Liam on his back {like a little kid} down one of the main shopping streets of 홍대 which was a hilarious sight to see I’ll tell you that much! At one point, we passed this little boy riding on his father’s shoulders and Liam lifts his hand up to give him a high five and the boy rejects him while the dad just laughs. I struggled to keep myself from falling over from all the laughter.

At 9 pm, we all met up with Addie and Katie to get some 빙수. Everyone kept saying they didn’t want any so I ordered one with Kaitlyn to share while Liam ordered his own. However… when Liam’s came out, everyone started eating it. What about the whole “I’m not hungry thing?” Just joking! The rest of the night was spent chatting with my fellow NSLI-Yians and enjoying the 홍대 atmosphere at night. It was really nice~ 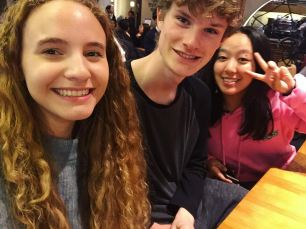 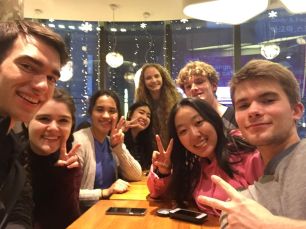 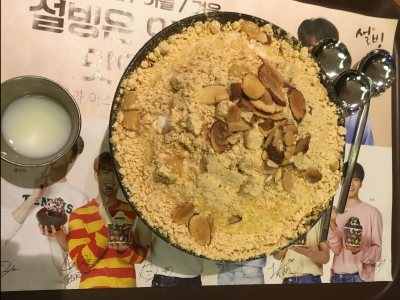 I got home quite late—around curfew—and everyone was just about to get ready for bed so I joined them and went to bed early. I didn’t attempt to do any homework. The next day was my actual birthday; however, and I knew that I would have to do work then, unfortunately.

When I first walked into my room, I was surprised to see a birthday banner hanging on the closet doors and lots of balloons. I almost started crying {do not worry… I didn’t actually cry until I said goodnight to my host family and closed my door}. My host mom was surprised when I came in to thank them but I had to! The gesture was so sweet and I couldn’t believe they continued to think about me and how they could make my day so special ~~ I could not believe it~ I am so grateful for my host family!! 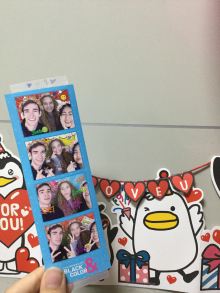 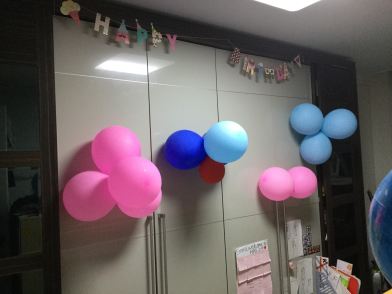 Sunday marked my actual 19th birthday~ I woke up at 9 am to video call my mom. She sent me two packages {one actually from her in America} while the other one she ordered from China, and she wouldn’t let me open them until I talked to her on my birthday. My mom sent me a lot of little things that I asked her to like Chicago t-shirts for my host family, Pilot pens, candy corn, etc and then she included some snacks and a sweater for my birthday. The second package had this really pretty Spirited Away Music Box that plays actual music from the movie. It was very thoughtful of her~ I video called her for about an hour and a half. We just talked and updated each other. While we were chatting, I made little candy corn goody bags for my host family and friends at 하나고. 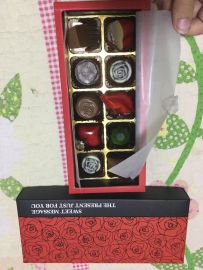 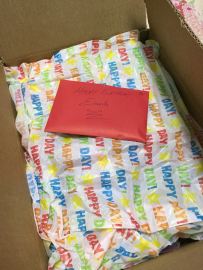 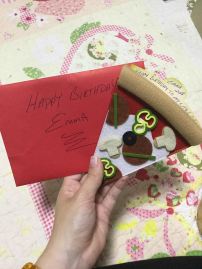 The rest of the afternoon was pretty casual. My host mom and dad bought me this beautiful box of chocolate {none have survived till now. They were all so delicious!} which was really nice of them~ Later in the evening, I went to go watch a movie with my host mom and host sisters. I think the movie’s title was something like clocks in the wall? The Korean movie title had the word wizard in it. The main character was Jack Black which was all it needed for me to watch it. It was kinda good? I wouldn’t see it again but it was really funny at times. 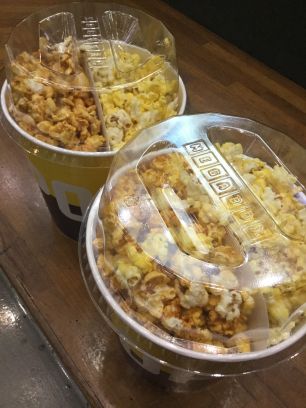 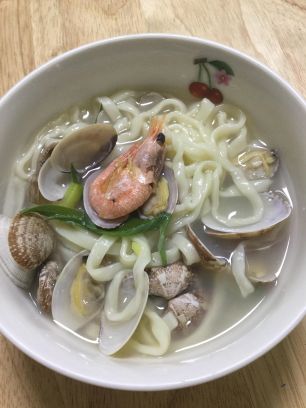 After the movie, we walked around the mall for a bit and visited some stores. Dinner was at home and it was nice getting to talk with everyone again {since I ate out the last two nights}. We watched some TV together and then I wrote some blog posts. Since I took a big test on Thursday, we had no homework due Monday~~ What the perfect birthday gift.

That’s all for this blog post. Hope you enjoyed ^^