Friday was honestly a blur. I was lost in Philosophy {as always}. Though, we did watch a documentary in the second half of the class which was a nice change. It was about different education systems being compared to Korea’s—very interesting. They even had a segment on gap years and I was sitting there smiling like a fool feeling grateful that I even have the opportunity to do this. 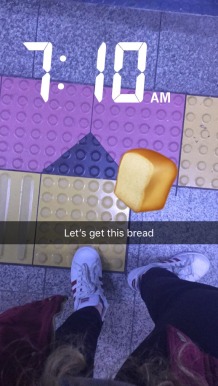 Economics was not too memorable. I was able to understand some of the teacher’s stories which made me proud. {Mostly because I could laugh along with the students} The best part of the class; however, was being able to talk to 세림. We talked during the whole break. This time we talked about our siblings and what they are doing right now. Funnily enough, we both have siblings studying to be dentists!

Lunch was fun because Katie and I got to eat with our big group of friends. Lunch wasn’t too filling so we all met up at 서린’s locker later to steal some of her birthday snacks.

After lunch was sociology and then my Mentorship class. Wow, I love the girls in my group, we could literally make any topic fun! We discussed the differences between academy {학원} teachers and normal school teachers in Korean and the different ways respect is shown in the Korean and American education system. While we were talking about these things, 규원 and 주연 then started {playfully} arguing about which type of teacher they would rather be; they were getting heated and it was hilarious. Then randomly during the conversation 주연 screams and says she thought she heard a rat. So then 규원 goes on to mock 주연 and ask her what a rat sounds like. They are such a fun group.

My last class of the day was English and we just discussed the last chapter of our novel Exit West {still salty that I never got to read it….} But when I walked into class, I see “We need more time” scribbled in giant letters on the dry erase board. When Andrew walks in, we all start singing Happy Birthday to 서연. She then makes a wish which was to push back the due date of the essay. This was all hilarious! Andrew laughed at it too {and later pushed back the deadline for them by two days}. This was definitely something my class would do in AP Lang and Lit so it was nice to see the struggling student symbol be universal.

Once class was over, Katie and I took the bus to 연신내역 together. We got 호떡 together and tried to withdraw money for me {RIP the bank near 연신내역 doesn’t accept foreign card!} I rode the subway with Katie till her station and then transferred to be on my way towards 숙대역 in order to meet up with Addie and Jessica for a NSLI-Y 8 reunion!

While on the train, 민정쌤 sent out our monthly evaluations based on our unit tests. I was so afraid of reading it because 민정쌤 personally wrote in the email that I shouldn’t be upset at my grade {because she knew I would be} because it doesn’t matter. This really worried me and I opened the attachment while my heart was practically beating out of my chest.

I was shocked to see that I had moved up from my pre-OPI score. I could have cried in that moment if Katie and I were not on a train with a bunch of strangers. I was shocked because I didn’t think I could possibly be at that level yet {comparing myself to my classmates who were at that level coming into the class}. My teacher roasted me plenty in the comment section, however.

She said that I need to practice using the 습니다 form and mastering many basic beginner and intermediate grammar points {Which I knew}. She also said that I can be talkative when I’m leading a conversation or talking about something familiar but when it comes to speaking in class, I only participate when called upon to. {It is something I need to work on—confidence} But besides the many critiques embedded in the comments, she also praised me for studying so hard. I had a smile for the rest of the ride~

Addie and I got there the earliest so we changed out of our uniforms and walked along the streets of 숙대 together. The streets we walked down so often during the summer. I tried looking for my favorite cafe {Cafe Areca} but couldn’t find it… I’m really upset about it.. I’m hoping they moved locations? Ahhh this is depressing. (Good news! I left a comment on their Instagram and they did move locations! Thankfully!! I will have to visit at least once before I leave!

But eventually, Jessica showed up and she ran towards me and Addie. I embraced her in a giant hug! I couldn’t believe we were meeting after two years {so blessed to be still connected with some NSLIYians~} We decided to eat all you can eat Korean barbecue at a place that all of us had visited back during our days as 숙대 students. I went there once, on the last week of the program I think, with Abby, Yves, and Sofia {Link to that post here!} They upped the price to $11 {so one more dollar than two years ago} but I was still content! That’s a good price for so much food and filling up on meat at that. We talked while Jessica mostly grilled and fed Addie and me well~ I finally got to hear about Jessica’s life at 연세 and she even told us about her interesting yet kind of complicated love life. Addie and I updated her on our NSLI-Y struggles and some tea that we had. We laughed a lot!!! 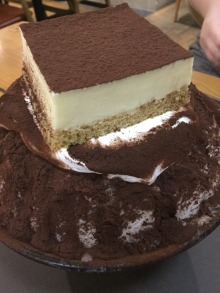 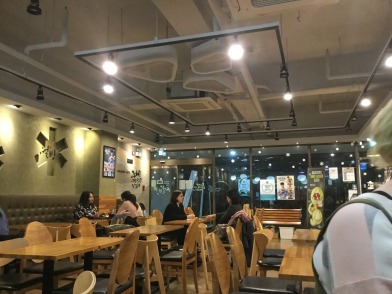 After eating meat, it was still pretty early {cheers to weekend curfew being 11 pm} so we went to the 설빙 {another place we frequented using the summer program} and got some 티라미수빙수 (Tiramisu Bingsu). We talked a lot more and laughed our heads off in that cafe. We were definitely fulfilling the obnoxious foreigner stereotype at that moment. 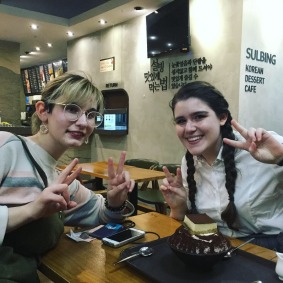 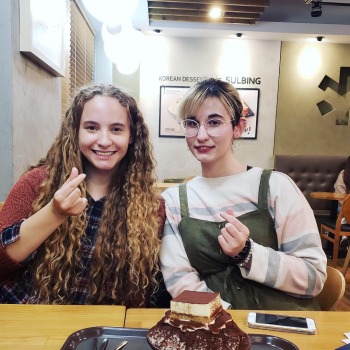 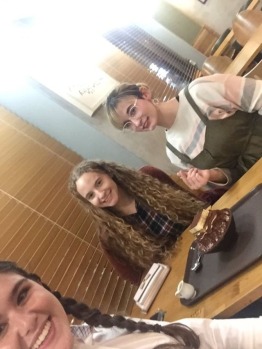 The night was over as quickly as we finished our 빙수 {I’m sorry was that cheesy?} and I had to rush back home to make it in time for curfew as I live a good ways away from 숙대 now. Especially because I didn’t know how to transfer on the right line at Seoul Station…so I got on a line that added some minutes to my commute time. {But don’t worry, I made it home right by 11 pm!}

It was a night of reminiscing and making new memories~ I cannot wait to meet up with them all again very soon~ That is all for this blog post~ I hope you enjoyed!