The morning was filled with a usual amount of anxiety and butterflies in my stomach. I planned to go out for lunch with my supporter 수진 {Sujin} which should have been deemed an exciting plan to have; however, I was extremely worried about how it would go. I highly treasure my memories with her from the summer program and I was very worried that we wouldn’t connect like we did over the summer especially with my Korean skills. I wondered if maybe we only got so close because of the whole group dynamic. What if it was Jodi or Casey that made us have such a good time? These worries were honestly very unnecessary as I should have known that our bond was special. I also knew that I recognized the fact that my Korean is better now than it was when by the end of the summer program and definitely better than where it was at when I first met her in July of 2016.

When I arrived at our meeting spot, 경복궁역, I could not find her. We texted for a bit wondering where the other could be. Had I already forgotten her face? That was impossible! Eventually, she ran up and hugged me from the side and we both walked to get some lunch. At first, I felt awkward but as soon as 수진언니 locked arms with me, I felt comfortable again— like she was truly my older sister. We chatted about being hungry and went to order soba noodles at this very famous place. At first, she could not figure out the self-ordering machine {a common thing in 라면 (Ramen) places it seems?} and when I finally did, she was amazed. 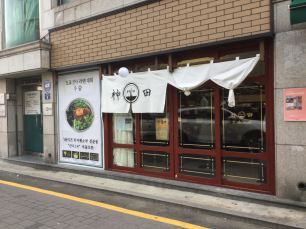 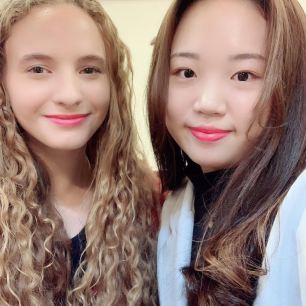 The noodles were okay? Whatever spice/seasoning they used did not remind me of Japanese food whatsoever… it was very beefy but tangy and spicy at the same time?? It wasn’t bad but I couldn’t finish the whole thing. After our noodles, we walked around a bit before buying egg tarts {the best ones I’ve ever had!}. We ate them and walked through the streets while updating each other about our lives. When a dog walked past us, 수진언니 hesitated and shrieked just the tiniest bit. I knew at this moment that she was still afraid of dogs. We talked about what we had been doing this year at school and she asked me lots of questions about coming back to Korea. 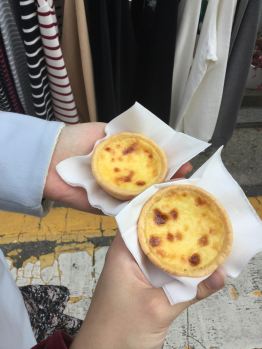 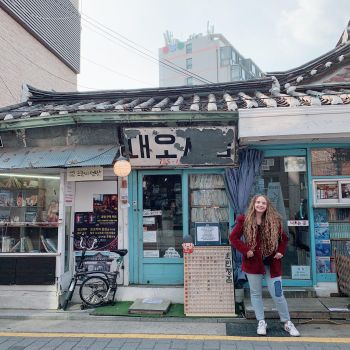 We found this book store turned cafe that is famous for its vintage look and the fact that IU took a very famous picture there (for her album cover I think). We took so many pictures outside because the architecture was so pretty! And then we went inside to get a drink and chat some more. 수진언니 got an Americano while I had 유자레몬차 (Citrus lemon tea). At the cafe, I even helped 수진언니 practice a little bit of English which was really nice and refreshing. We talked a lot and had a really good time. 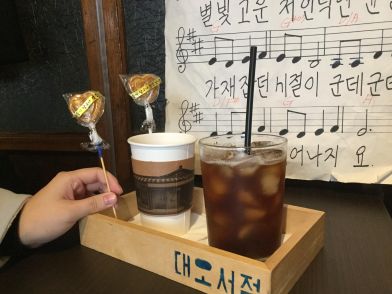 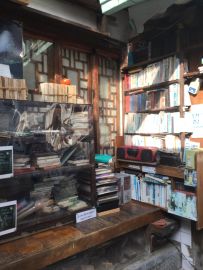 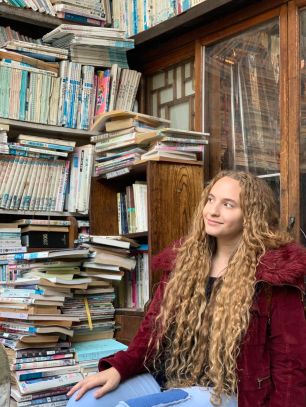 After leaving the cafe {and taking more photos} we just walked around the area. We tried finding this famous cafe but we only stumbled upon a perfume store {took some more cute photos there though so it was not a waste}. Eventually, we just walked around after going into a few cafes and giving up. I just enjoyed walking around and chatting with her~ That is all I needed to be planned~ 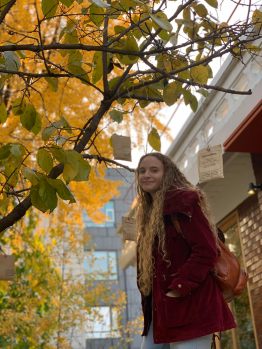 수진 언니 had dinner plans so we separated around 5:30 pm. She waited for my subway car to come before leaving to head back the way we came. At that moment I felt so grateful to have her in my life~ During the whole day, she was patient with me and we still had the best conversations despite the language barrier worries I had earlier in the day. I am so lucky to have had such a great supporter~~ ^^ Or should I just say friend now?

I came home early for dinner and ate with my host family. I also played around with my host sisters as they showed me this new robotic cat toy they bought? The rest of the night was spent preparing a PowerPoint for a Citizen Ambassadorship presentation I’m doing for iEarn {along with Josh} He wanted them done then so that he could compile them and make the final PowerPoint the next day. 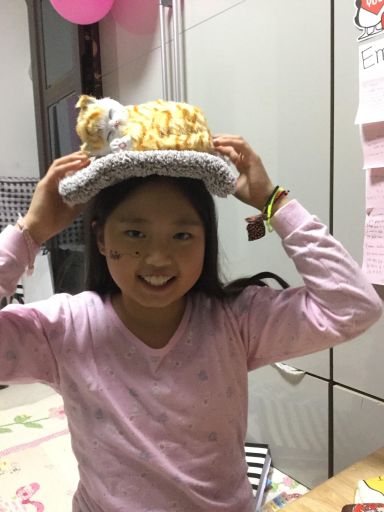 In Korea, today was Peppero day {11/11 represents 4 Peppero sticks. A couple would have one in each hand so 4 Peppero sticks. I didn’t eat any Peppero, however. {I also don’t have a boyfriend to exchange them with anyway…} It was a normal, chill Sunday with a twist. I went with my host family to an escape room made for kids! 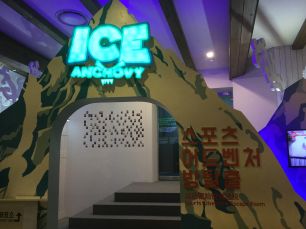 At first, I thought we were just going to a kids cafe so I assumed I could find somewhere to sit and do work but no, we drove out to a mall to experience an adventure! The escape room was called Ice Anchovy {don’t ask me either… weird name…} Everyone got these bracelets that needed to be tapped against Anchovy stickers on the wall. When a beep could be heard, the point was collected. There were a lot of them on the wall; however, some of them were distractions and didn’t give any points. 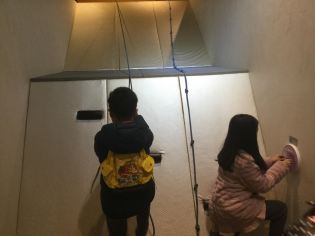 In the escape room, we climbed through this Chuck E Cheese-like ceiling jungle gym contraption {that’s really the only way I can explain}, “rock climbed” across spikes {Styrofoam spikes}, climbed through a net web, and then had to solve little puzzles inside locked rooms (like your more traditional escape room). We finished off, escaping through everything, by going down this large slide into a foam pit. It was a lot of fun! I might be 19 years old, but that was such a good way to spend an hour.

That is all for this blog post! I hope you enjoyed~ I feel like recently, I have been doing a better job at posting regularly? On this blog? I credit that completely to having more time during winter break and using my blog as a distraction against real studying… (just kidding…just kidding). But since winter break is coming to a close… I will have to put more effort into keeping up with this blog! Until then, I hope to spam posts for the next couple of days! Till next time!