Today was the day I had been waiting for all week~ The day that we would be able to eat some real American food and share the Thanksgiving holiday/American culture in general with our Korean high school friends. Although I was originally worried that 도윤 wouldn’t be able to come, (I complained to 민정쌤 with some very sad messages when I thought this) it turned out to be okay! 도윤 was coming!!

My morning was very relaxing. I ended up waking up 10 am… no regrets! I lounged around in my room for a little bit while getting ready and even filmed some SnapChat videos to send to my friends— I even did a 먹방 {Korean eating show // Basically, you talk while eating and record that}. While taking to the subway, I memorized my speech in preparation for the dinner. I was definitely still shaky when I first practiced it at the youth center, but it was overall pretty well-ingrained in my mind after a few run-throughs.

All the NSLI-Y students arrived at 1 pm so we could do one huge run through on the speeches we would be giving. For most people, it went pretty smoothly. I was not really ready for 4 hours of class that day… I knew it would leave me exhausted but at least I’d be ready to eat! Besides my desire to crawl into bed instead of learning Korean, I think that this class was the best one of the week. I participated more than I usually do when creating example sentences with our grammar points and I did pretty well in a role play with Josh. I was the 선배 {senior} while Josh was the 후배 {junior} who was being yelled at by me for not paying attention to the details of this event. I think that I thought on my feet fairly well and I used a good amount of grammar points. I was proud of myself; am I allowed to think that?

Also, we gave our presentations on songs we liked and mine ended up turning out really well! I had memorized it the night before and barely made any mistakes in relaying my script to everyone. I also think I made it more interesting because I got to show them my 1 Second Everyday video from my senior year of high school {For those who don’t know me personally, I took 1 Second long videos every day during my senior year of high school and edited them into a compilation video.} In the video, the second half used the song “Wherever I Go” by Miley Cyrus which was the song my presentation was about. At the end of the presentation, my teacher told me that there were practically no errors— I felt so proud! I didn’t personally think that the presentation was anything special or out of the ordinary for me… but I will definitely take the compliment! I did work hard on it~ {And I did it early—memorization and all—which probably improved my presentation.}

After Korean class, I walked with Jacquelyn and Josh to the subway exit where we would be meeting our school friends.

Waiting at the station for everyone to arrive was nerve-wracking and exciting at the same time. Meeting everyone else’s school friends was fun but also quite awkward. I wondered if it would be just as awkward when 서린 and 도윤 would arrive. Eventually, they pulled up in their taxi and Katie and I simultaneously screamed! It was really nice seeing them again and it was a bit strange to see each other not wearing our 교복 or our 생활복. They were both wearing really nice dresses and carrying really nice bags. We all looked at each other and took in the fact that we were meeting outside of school in 홍대 of any place! I could tell they were really happy to have the opportunity to leave as they still have to wait another two weeks before they can go home and visit their family for the weekend. 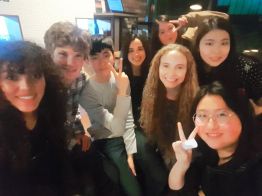 We walked to the event location from the subway exit together. We were having our dinner at this place that allows you to rent space for meetings, study groups, etc. We all sat down at these long tables and at the back of the room, we could see all the food that was waiting to be eaten. 민정쌤 told me during one of our breaks between Korean class that we were having real American food. In fact, the turkey was actually FROM America. Everything was bought from the military base so we would be having the full spread. Before we could dig into the food, each of the Korean classes gave their presentations that were prepared. 1반 (first class – beginner class) spoke about all the different types of food usually eaten during Thanksgiving. 2반 (second class – intermediate class) presented about the activities usually done on Thanksgiving and after (Black Friday was included). Lastly, my class 3반 (third class – advanced class) spoke about the history of Thanksgiving: who the pilgrims were, the interactions between pilgrims and Indians, and how the actual holiday was established.

I did memorize my speech; however, I was so nervous to say it in front of everyone. I was heavily breathing and literally shaking the paper in my hand because of how nervous I was. At the beginning of my part, I stumbled a bit and had to look at my paper but from then on (except for slight pauses when I had to think about what to say) I was able to speak from memory. I know I could have read off the paper like everyone else and probably have spoken better because I would have had the words right in front of my face. But honestly, by memorizing the presentation, I actually learned what I was saying. By the end of it, these words were not still words I just looked up in the dictionary for the presentation, they are words that are now committed to my memory. I also think that I pushed myself by doing so. I would rather have struggled to try to speak without looking at the script than using it as a crutch. If you think about it on future terms, I will not have a script with me when I want to talk to others all the time (formal setting or not). 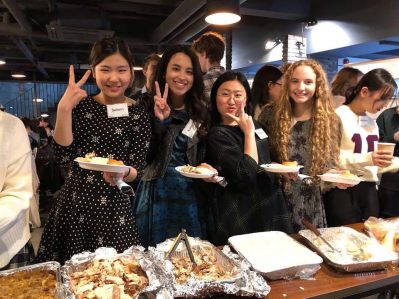 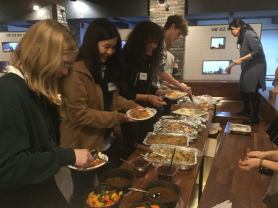 Once presentations were done, it was time to actually eat dinner! (The highly anticipated part of the night!) My mouth was watering just looking at all the food in their catering tins. There was turkey, mashed potatoes, veggies, stuffing, bread rolls, cranberry sauce, gravy and for dessert, and both apple and pumpkin pie! All of our Korean friends really enjoyed the spread of food. Additionally, all of them had never even eaten Turkey before this day! (Turkey is not eaten in Korea… mostly because there are no turkeys in Korea!) We chatted over dinner about our school life and other random topics to get to know each other. Liam brought up that he spoke Danish and 도윤 really wanted to hear him say something and I told him to call her pretty in Danish. 도윤 swooned at Liam saying this. When he got up to go get seconds with his friend 정우, 도윤 freaked out in front of me. It was pretty funny and sincerly adorable. By the time 도윤 and I were ready for dessert, there was no apple pie left which was kind of disappointing. I got a slice of pumpkin pie even though I never ate it in America– every time I had it, I did not like how it tasted. However, I ate the entire slice this night and was pleasantly surprised by how delicious it was. I do not know if my taste buds changed or if I was just trying to clutch on to something that reminded me so much of back home. Either way, it was a good pie. (Also, all of our Korean friends had never had pumpkin pie before either! A lot of firsts tonight! But this was pretty surprising to me because Koreans do eat a lot of pumpkins and I see a lot of pumpkin flavored things here… but then again, pie is not really a dessert of choice here so it makes some sense.) 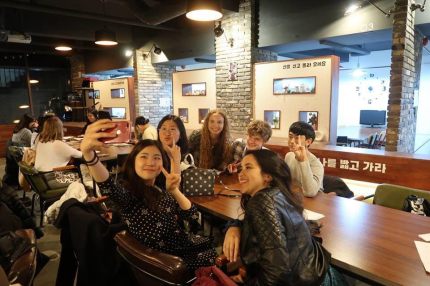 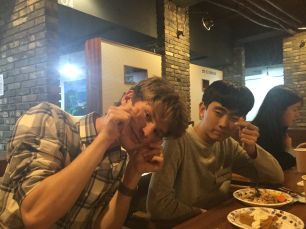 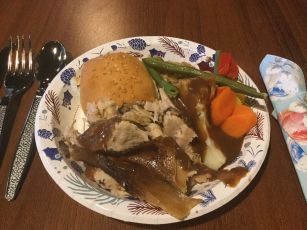 After eating, we all took a ton of photos including a large group photo with the legendary NSLI-Y banner. 서린 and 도윤 wanted to stay out for a bit longer because (like I said earlier) they do not get the opportunity to leave school grounds often. We walked around with Liam, Josh, Jenna, and Jenna’s school friend. (When I say we, I mean the collective group of Katie, 도윤, 서린, and me.) Eventually, we decided to stop in at the bakery near exit 4 that Katie and I had gone to once before to have a place to sit at and chat until we had to get going.

Because of the special event, 민정쌤 extended our curfew by 30 minutes for those living in 서울 and an hour and a half for those living outside of 서울 (technically she did not say 고양시 so I consider myself having respected the curfew time…) I ordered a hot cinnamon tea and enjoyed the time being able to chat with everyone for a bit longer. It was a lot of fun! Before we knew it, 10 pm rolled around and everyone had to start leaving. Katie and I said goodbye to 서린 and 도윤 as they took a taxi back to 하나고. I got home a bit after 10:30 pm and most everyone was already sleeping. 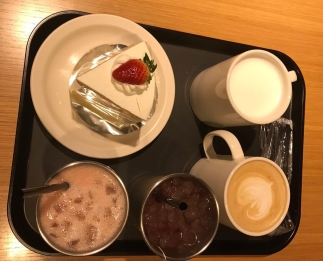 My little host brother greeted me at the door with “Emma누나 왔어!” And my host mom greeted me. as well. I brought home two containers of leftovers for my host family so that they could try out what a Thanksgiving meal is like. I stayed up pretty late after that writing blog posts and doing some homework here and there. I convinced 민정쌤 to let Katie and I skip school on Friday because 하나고 민정쌤 said that it was okay seeing that there would be no actual classes on Friday. I fell asleep feeling very grateful for everyone~ At the event, during dessert, we all went around our table and said what we were thankful for. I believe that most people felt that it was kind of awkward or embarrassing to express those feelings, but I really wanted to share my feelings. I said I was thankful for 서린 and 도윤 and my whole NSLI-Y family for allowing me to live so happily and comfortably here. Studying abroad is difficult a lot of the time but because of them, it is also very rewarding.

That is all for this blog post! It was a very long one! Actually, I am sort of publishing this post out of order because my Wednesday post was not long at all so I decided to combine that one with the post for Friday (also pretty short in comparison to this here post) which will be posted after this one! I bet no one noticed the dates not matching up but here I am explaining that situation anyway! Well, I hope you enjoyed this post and even though Thanksgiving has passed by the time I upload this post (*cough cough three months later hehe) I hope everyone had a great day with family! Thanks for reading!