Tuesday’s Mentorship Class, 공강 in Korean, was a lot of fun. We started talking about Christmas and comparing the Holiday between our two countries. We both celebrate some of the same traditions but it’s still very different. I explained that in America, it’s usually the biggest holiday celebrated by the vast majority of Americans and that it is considered a day spent with your family. On the other hand, in Korea, Christmas is very much more of a couple holiday. When you are little, you get gifts from your parents and such, but teenagers and adults start using it as a day to spend time with their significant other. Also, it’s definitely not considered as important as most school breaks don’t really include Christmas Eve or the days around Christmas. The boys in my group told me that last year, they actually had their finals on Christmas {This year they are lucky enough to have their last day of finals be on Christmas Eve so they can leave afterward to return home.} Because of 하나고’s unique schedule, Katie and I will start break on the 14th of December; however, all the other NSLI-Y kids will still be going to school throughout the majority of December and even have school on the day before and after Christmas.

I told them that my old high school had a snow day the previous day and none of the three boys knew what a snow day was. We also talked about what children do in the snow. I inquired about the fact that Koreans make snowmen with only two snowballs??? I was like ??? There should be three: head, torso, lower body. We laughed about this for a bit. Also, I found out that there is no word in Korean for a snow angel. 호영 said that children do it because they’ve seen it in movies but that there is no actual word. I asked him how the kids ask each other to make them. He demonstrated by just moving his arms in the motion of a snow angel— it was pretty funny.

I think next week will be my last conversation class with them which is really depressing. I’ve had a lot of fun speaking with them… it has made me look forward to my Tuesday mornings so much! I’m going to miss them a lot! I think I’m going to prepare little gifts for them and write some short letters.

Katie and I decided to eat lunch at school today in order to stop wasting all our money at the convenience store. It was very interesting… so we didn’t eat much of it. I’m not a fan of octopus, to be honest. 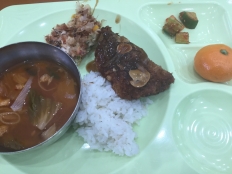 In Korean class, we had some fun conversations about medical terms including the word for a shot. This led us to talk about the fact that Koreans often get shots in the butt which I could not imagine… not since I was a child have I had to deal with that… Also, Josh told us about the time he fainted from getting a shot. We also learned the grammar points for quoting someone’s statement and questions which I know will definitely be useful. The only problem was that we rushed through both of them in the last hour of class and I’m pretty confused on them:.. they aren’t in our intermediate grammar book either so I’m gonna have to do some research so that I can actually use the points naturally in conversation.

When I came home that night, my host family was still out and about. I decided to video update some friends of mine; however, the quickly turned into me blubbering like a whale on the floor of my bedroom. I stopped sending happy videos to all my friends and continued to record myself crying and venting to my friend Kara. I don’t know what has come over me lately but it’s probably all due to stress and homesickness that I’m so emotional. And for some reason, I can’t help but get mad at myself for being this way. At least from my perspective, it seems that everyone has got their life together and that they are just thriving here in Seoul. Like why can’t I be happy about all the fun I’m having here? For this great opportunity? Honestly… I just really want my mom.

Can I just talk about how awkward it is going into a class and not knowing where you should sit? Or if there is even a seat for you? It’s pretty embarrassing… Economics was good… I really don’t pay attention to much in class except when my teacher tells stories. I like to listen to those and some of the times I can actually understand them. For the second half of the class, our teacher let us do whatever we wanted so I got to sleep for an extra 30 minutes and studied some vocab in preparation for the monthly exam the following day.

한국사 was nice too because I got to study more though I was having trouble figuring out exactly what I should be studying. I couldn’t take out my computer and do vocab and I didn’t want to go over the new textbook grammar until I was home, so I just did exercises in the grammar book. During class, my teacher asked me how often do I call my parents and I tried saying once a week but time in Korean is still a mystery to me and I said it wrong and he corrected me which made me feel like an incompetent idiot but hey what’s new?

Katie and I ate lunch with our friends today which was fun as always. I always look forward to eating with them although sometimes things do get awkward due to the language barrier. I talked to 도윤 a lot about my expectations before coming to Korea and the culture shock I experienced when arriving. We laughed together about how some people come to Korea thinking everyone will look like idols and movie actors and about the fact that bathrooms sometimes don’t have soap or that toilet paper is outside of the stall. {This has been so hard for me to get used to… or having bars of soap for public use? That is so unsanitary!

Wednesday was another of those 다 먹는 날s {eat everything day} so if you were able to finish your entire plate, you would get a sticker. The prize for this month were these handmade hand warmers shaped like cats and owls. However, only the homeroom class with the most stickers from each grade would be receiving them.

When we finished eating, I placed my sticker on my homeroom class and was surprised to see that we were winning. When I put mine there, 도윤 and 서린 yelled at me because they obviously wanted their class to win. Results wouldn’t come out until the end of the day, so everyone had to wait to know who would win.

After lunch, I had Statistics which I really dreaded. But even though I felt that way, I still took notes diligently but the material went in one ear and out the other.

After school, I had my second club meeting!~ When I returned to the same room it was held in a couple weeks ago, I was greeted by familiar faces. I was mostly happy to see 지현 from my homeroom as she {I think} actually enjoys talking to me.

During this meeting, we had three people give economically based powerpoints. The first one was a real story about two PC방s and their pricing competition, the second was about refugees and the last… I had no idea! I really didn’t understand most of them. The best part of the meeting was simply talking to 지현 about driving, her clumsiness, learning Korean, etc. At one point I showed her one of the Quizlets I was studying for my quiz and the random words that were on it… including the word for constipation: 변비. As soon as she saw that, she turns to tell everyone: “Guys, guess what Emma is studying right now? 변비!” It was a bit embarrassing but I mostly laughed along— it was really funny!

After the club meeting was over, I sat down on one of the benches in the third floor and tried to study vocab for an hour but to be honest, I was mostly snap chatting my friends and scrolling through Instagram. I was waiting for Katie because she was participating in this event with students from Thailand and it was ending an hour later than the normal club ending time.

Eventually, 5 pm rolled around and Katie was free from her obligations. We were planning on meeting with this student named 하영 who would be interviewing us for the school newspaper. The interview ended up taking an entire hour although there were only about 10 questions. Katie and I can just talk A LOT. The questions he asked were along the lines of What was your first impression of 하나고? Is studying Korean hard? Where have you traveled outside of Seoul? Where do you want to visit? Favorite food? Hobbies? etc. 하영 was very nice during the entire interview. He was patient when we had moments where we just sat in silence trying to figure out what to say and he encouraged us when we stuttered or were confused by what we were trying to say. He told us multiple times that we could say it in English if we were struggling but we were able to get through the majority without speaking English. We also found out that he had studied abroad in America {LA}, so maybe that had a part in how he was so understanding and patient. He’s has had a similar experience to us.

After school, Katie planned on going to a cafe to study but the activities really tired us out so we returned to our respective houses to study by ourselves.

I ate dinner with my host family and then went to my room to hide out for the rest of the night—studying of course. I dedicated yesterday to studying vocab, so I spent the night studying all the new grammar points from our 3-1 textbook and also practicing answering some questions for the OPI too. 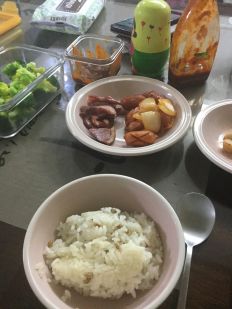 I went to bed pretty late… due to me staying up late studying mixed with the fact that I had all these nerves about the test too. I knew I wasn’t going to move up a level… but there was still some hope inside of me that I could use enough grammar and good vocab to prove to my teacher that I could. However, I did realize that although I’m learning all these grammar points and vocab… if I can’t put them to use as the others can why even bother with thinking I have a chance at improving?

That’s all for this blog post~ I hope you enjoyed~ Sorry it got a bit emotional and negative… I blame the stress from this upcoming test. Wish me good luck?