So during Korean class today, we got our monthly tests back. And when I first looked at my test, I was pretty happy. She gave us back the reading test first and I only got 4 wrong. I can’t remember how many I got wrong last time but I’m pretty sure this is an improvement. Then, I looked at the writing test and my mood immediately changed. The whole page looked red. I started breathing heavier as I began to get upset by how many things it appeared I did wrong. I read over my essay and tried to make sense of the mistakes I made. Many of them were small errors that concerned particles while others were about using wrong grammar points entirely, words that my teacher didn’t recognize, or mainly… writing the whole essay in the wrong verb form. {I wrote the whole thing in the formal conjugation 습니다 rather than the diary form ㄴ/는다. So basically every sentence was circled because of the wrong ending, but she also underlined every correct grammar point usage which only made the essay appear as if there way more mistakes than in actuality. I ended up getting about 4 points off on the long writing and 2 points off on the shorter response. But the thing that really irritated me and made me the most disappointed in myself was the grammar section that involved completing sentences with certain points. I read the directions but did not exactly understand what exactly they were asking. Each question consisted of three parts of a sentence chopped up. For example, one might have said “To be sick,” “don’t eat anything; eat bread.” and “Teacher said.” The page also had a word box at the top of the page with lots of different grammar points. However, I assumed that you only needed to pick two not three. Because of this, I wrote all three sentences with only two grammar points. Despite the fact that I used those grammar points perfectly, I still got 1.5 points off on each question for not combining the 3rd point into the sentence.

This totally failed writing section led me to have a grand average of 71% !!! Wowwww I love having high grades! I don’t think I would have cared all too much if I didn’t do the percentage calculation… as soon as I did that… my eyes began to water and I had to fight back tears from forming in my eyes.

We started off the rest of the class by going over the grammar points we learned last class— two points that I only semi-understood. They include some exceptions to the main conjugation rule which threw me for a loop because I couldn’t exactly pinpoint what that exception was until I looked at everything later by myself. My teacher asked me a question at one point and I just sat there and didn’t say anything. I was honestly trying to think of something to say but I didn’t know what would work as like I said, I wasn’t 100% sure on when to use the point. She allowed the others to answer instead of me as I was at a loss of words.

She asked me another question and I answered it pretty well but then she asked me to describe a situation at a park where you would ask someone to do something and all the things I was thinking of were not things I could not say with my vocabulary. I struggled just sitting there. I started sweating and felt like I was going to cry.

During break time, the teacher could tell that I was having an issue and while I was fixing my notes, I could tell she was trying to subtly tell Jacquelyn to leave the room as I heard their whispers. I then hear Jacquelyn say “제가?” and then the noise of her chair being pushed back and the door closing. My teacher looks at me and asks “왱?” And I immediately hide my face in my hands and start crying. I did not expect myself to lose it {especially since I cried the previous week… I figured it would be a while till my next public cry… oof that’s sad to say}

She came over to my seat and tried comforting me with a small hug and some pats on the back. It was such a kind gesture and I really am glad my teacher cares so much about me. She doesn’t have to worry so much and it hurts me to know that she does. She asked me if I was upset about the test and although that was partly it, I think it really just added to me feeling overwhelmed until I just hit my limit right there in class.

She tried talking to me but I can’t even accurately express my feelings in Korean normally let alone when I’m crying. I just told her that things are hard and I’m feeling stressed about school, classes, my improvement lately… and I’m missing home a lot.

My teacher told me that when I do not understand a vocabulary word or a grammar point, I should ask her and she will take the time to explain. She told me that I am not stupid (I told her I feel like that when she calls on me and I cannot answer) and that everyone is good at different things. She said that I should be proud of my improvement, that I got the highest score on the reading section out of everyone… so I should not be too hard on myself. She was even kind enough to tell me that if I need extra help with something, she can ask Jacquelyn and Josh to leave first after class and she can stay back to help me out with whatever I need. Bless my teacher! Her heart is too kind!

I went outside of the classroom and Jacquelyn, Josh, and 민정쌤 looked over at me at the same time. I ran to the bathroom and cried just a bit more and then I got myself back together: blew my nose, wiped my tears, and said some semi-motivating affirmations. During the following break, I confronted 민정쌤 and she gave me a hug which was really what I needed~

The rest of the class was not too bad. I was still quiet and not feeling motivated to participate all too much but I was better. I tried to use my imagination when creating example sentences and I did speak up when I did not know a word in the question I had to answer. Just by doing something as little as asking for help about the meaning of a word, I was able to answer the question correctly~ It made me feel good– optimistic even. 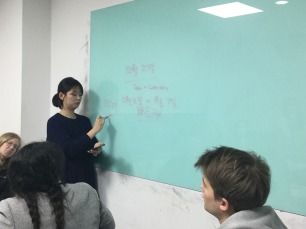 During our bi-weekly meeting, we practiced the presentations we would be giving about American culture {holidays, school culture, and popular culture} on Saturday when we visit a Korean high school. We also talked about upcoming events like our next cultural activity and any reflections/surveys due. During one of the presentations, we had 민정쌤 guess American slang words/memes and it was hilarious! Especially, hearing her say yaaaas and “Let’s get meat” when we brought up “Let’s get this bread!”

After the meeting was over, Katie and I went to Artbox and bought gifts for our 마니또 and bought tons of letters for our friends at 하나고, spending a bit too much money. I love Art Box! Definitely one of the best stores ever~

It also seems that I skipped talking about school this day but honestly nothing special happened… here was my day in two pictures: 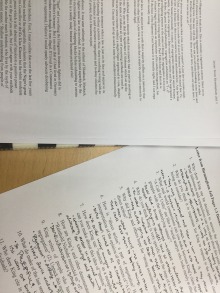 Yup, school lunch and a reading from 영미문학.

That’s all I want to share with this blog post~ It kinda ends abruptly… but that’s how it is sometimes. I am behind {like I said earlier} so I need to catch up. I apologize for my next blog post too in case things feel rushed. Thanks for reading!