For today’s activity, the NSLI-Y cohort participated in a cultural exchange between America and Korea by attending a program at a Korean high school: 선정관광고등학교 {Sunjung Tourism High School} to be exact. This school is a pretty unique high school here in Seoul as it’s a specialized school for girls who have plans to work in the tourism/service industries. {This means anything from hotel employees to casino workers to flight attendants.} They take regular classes {like math and such}; however, the majority of them are not taking 수능 (Korea’s college entrance exam) and so they focus on other things. For example, the school has its own cafe class where they learn how to make drinks!! This is where we actually started the morning off at! After a group of girls picked us up at the bus station, we all got to get a drink from the cafe. Their green tea latte was pretty great!! 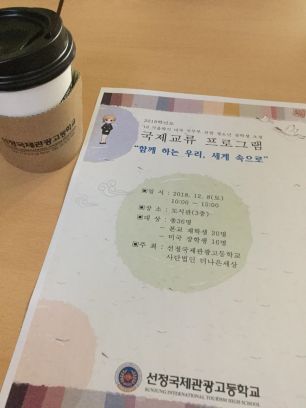 After we all got our warm drinks, we went up to the library to hear some speech from the principal of the school {Who happens to be Jack’s host dad?!?! Literally, no one but the other boys on program knew. We were all shook when he pulled up a picture of Josh, Liam, Jack and him eating a half gallon of ice cream from Baskin Robbins. It was hilarious though because the picture itself was quite funny.

After some words from the man in charge, we started going through our presentations. And let me just say it was clearly evident that the Korean students tried a lot harder than us when preparing their presentations. After seeing all that they did, I immediately felt bad for not putting in as much effort… 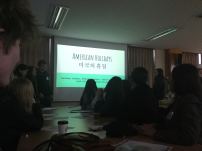 Our group presented about American pop {and other features of American popular culture like memes and trends}, American holidays, and American school culture. The Korean girls prepared presentations on Korean superstitions, spicy food, Korean etiquette/slang, and of course KPop. They all had these and funny videos to their presentations that really made them memorable. They even brought actual spicy food for us to try! So I actually had my first bite of Chicken feet in that library during the presentation. Jenna had it for the first time too but she could not swallow it… she had to spit it out in her latte.

After presentations, we split up into groups and moved onto the next activity: an M&M activity (The same one we did at the Hanmi Camp {한미캠프} during the summer program) Each color M&M corresponded to a question and so we all went around and asked each other these questions in order to eat all our M&Ms. I was put in a group with Kaitlyn and two Korean high schoolers: 윤지 & 지현. 지현 actually lived in America till 6th grade before she moved back to Korea, so she sounded just like an American when she spoke English. 윤지 was also really good at English. 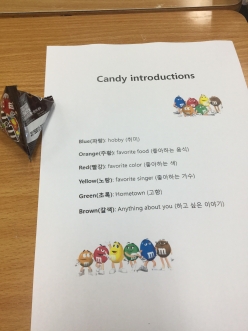 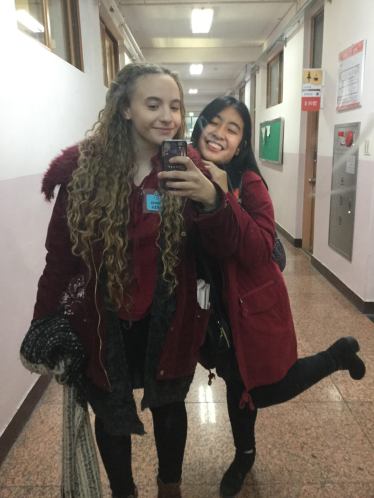 We went to this traditional Korean restaurant for lunch and got to eat with our new friends. The spread was 보쌈, fish, and of course lots and lots of 반찬. However, instead of being served plain rice, we were given rice that seemed to have been steamed in some kind of leave. The rice itself was brown and there were things like lotus root and beans mixed in. It reminded me somewhat of the Spanish rice my mom makes but also, in itself, very different.

Once we were stuffed with tons of delicious food, we left to do the main activity of the day: the 한옥박물관. Yes, the very museum that is in front of 하나고. The museum explored the history of traditional Korean houses from how they are built to the most famous ones in existence all around Korea. I tried my best to pay attention but to be honest, we were all too eager to just get to know each other and goof around so the tour guide did not receive our undivided attention.

After leaving the museum, the scheduled program activities were over so we were given free rein to spend the rest of the day doing whatever we liked–with our new-found friends. First, June, Harmony, Kaitlyn, 지현, and 윤지 and I went to Baskin Robbins to get ice cream. I shared one with Kaitlyn and we got a scoop of 달고나 ice cream and one caramel crunchy one (Kaitlyn’s choosing). Once we were finished indulging in the sweet dessert, we were off to find a 노래방 (karaoke). We spent about an hour singing and dancing to our favorite Korean and American songs. It turned out that everyone that was with us had a good voice? Like what gives? Here I was practically screaming and feeling my voice crack as I try to reach certain notes while I listen to the others sounding just as good as the original singers! I am not even kidding. While we were singing Ailee’s 보여줄게, I thought it was weird that this recording included the singer’s vocals too. I was like… is this even considered karaoke then? Turns out, it was just the amazing vocals of 지현! She could have seriously been going to an art/performance school rather than this tourism high school. 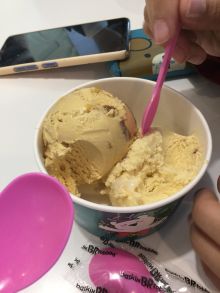 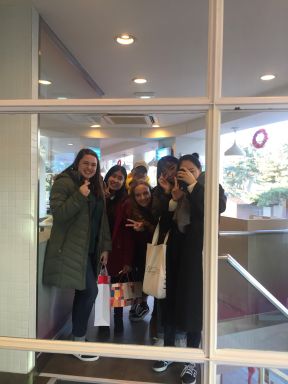 For dinner, we all (including 연우–she joined us at the 노래방) found this chicken place called Outdark. We chose to eat there because another big group of NSLI-Yians was already there. We ordered two big servings of chicken and fries–it was very very delicious. Hanging out with our friends was a great time and we spoke in a mix of Korean and English. We laughed so much and made lots of jokes. I was so happy that we came out to meet these students today. We promised to meet up once again–when the girls finished their exams. I was glad that we would have the opportunity to continue these friendships. (During the summer program, we only had a couple weeks after meeting those students so many people could not keep in touch and continue those friendships… I was happy to have more time!) Actually, when we first met, 지현 thought that we were only here for a quick trip and that we were going home to America soon. She was super happy to know that we would be here till May. I hope we can meet up again soon!~

That is all for this blog post! I hope you enjoyed~ 다음에 봐요 친구들!