When I woke up Christmas morning, I was a bit dazed and confused. My body slightly ached from having to sleep on the floor and I had no desire to get up and get ready for the day. Seeing everyone in the hostel room with me and the Christmas decorations still scattered around {some hanging by single pieces of tape on the wall} reminded me that it was Christmas. It didn’t feel like Christmas. The red and green balloons on the wall now read “rry hrimas” and that made me smile.

We all woke up a bit after 8:30 am and started getting dressed while also cleaning up the room before 민정쌤 and 소영쌤 arrived. We had boxes upon boxes of trash to be thrown out and our tired bodies struggled putting away all the futons and blankets back into the wardrobes. 민정쌤 brought us all Paris Baguette pastries/breads to have for breakfast but we were all still full from last night’s epic binge to eat anything else this morning.

Once everything was in order, we all wished each other “Merry Christmas” and went on our merry way {see what I did there?} Some students were going to church, the airport {Addie was taking a trip with her host family to 제주도}, out to brunch, while others were just returning to their host family homes to spend time with them. The latter was the group I belonged to.

I trudged my way back up to 고양시 carrying my overnight bag and gifts in hand. When I was walking back to my host family’s apartment, this random Korean man rode past me on his bike and shouted “Hello!” at me in English. I was just listening to music on my phone with headphones making my way back home when he did this. There were other people walking in front of me and him yelling made them look at me too. I immediately put my head down to cringe at how awkward this interaction was. It was very uncomfortable. After he shouted out to me, I began to think about how I hate being a foreigner in Korea. I started to think about the fact that it was Christmas but that I wasn’t with my family… I was in Korea, alone. This made me cry, so yes I walked the rest of the way home crying. When I approached the apartment building, the security guard actually came out of the small outside office to look at me (I assume he could tell I was crying) but did not say anything. Before I entered the home, I wiped my eyes and took some deep breaths. I was sad; I was homesick. However, I did not want to bring that into the house. I wanted to have a good Christmas, and so I was going to try my best to do just that!

My host sisters opened their presents and seemed really excited to use them! I bought them Japanese Poppin Cookin set which they have never done before! (I was surprised because they are so crafty–I figured they may have already done them.) I bought a sushi making kit as well as one for fast food. Basically, the whole point of the “toy”, if you will, is to make edible candies out of powder (using only your hands, water, and sometimes the microwave). I was worried that the taste would be really weird… but when I was making them with my host sisters the process itself was fun. And, some of the candies were very tasty–albeit some tasted really bad… 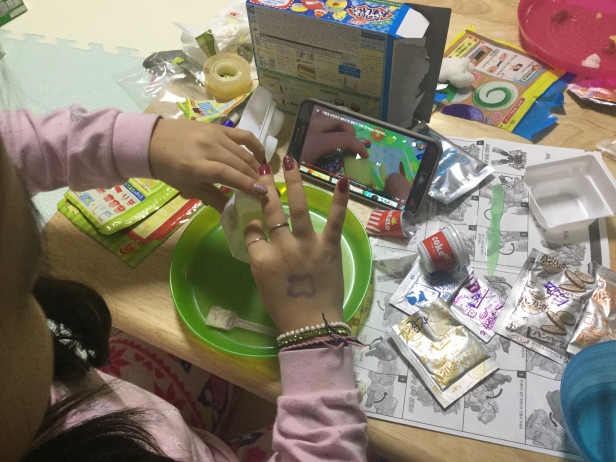 My host family also got me a Christmas gift which took me by surprise; they did not have to get me anything! They have given me plenty while hosting me during these past three months. I received a really sparkly, rainbow planner for the upcoming new year. My host sisters, host brother, and host mom wrote me really sweets letter/cards. I will always treasure them!~

I also got to video chat with my mother on Christmas Eve (for them) as my family was heading to a Christmas Eve Party. We talked for a bit while they were in the car and it was very difficult for me to have a good conversation with her at first (we haven’t talked in so long) because all my siblings were in my room screaming, singing, playing, etc. I had to tell my mom to repeat her sentences so often because I could not hear her over everyone else in my room. Though, I got to show my mom all my siblings which I could tell she enjoyed. She kept asking me to translate when I would say things to my siblings. I made fun of my younger brothers hair and my host sisters agreed that he is in dire need of a haircut (sorry Gabe! Love you <3) My mom sent me a package for Christmas as well as ordered me two things from Amazon; however, only one of the items from Amazon came in on time so I opened that in front of my mom. It was a stuffed plush of Haku from Spirited Away in his dragon form. I immediately wanted to tear up~ It was so cute! I have so many stuffed animals with me here in Korea now! Wow… I will definitely have to ship them back to America because I will not have space in my suitcases.

The rest of the afternoon was very chill. I spent most of the time in my room learning vocabulary on Quizlet (Even though this would be a part of my winter break, I needed to keep studying because there were only two days left till our End of the Month Unit Test for December!) For dinner, we had Ramen which I thought was quite hilarious. Maybe because when I think of Christmas dinner, images of turkey or ham or roasts pop up as well as other sides like mashed potatoes or vegetables, etc. We were literally having ramen. Though, it was great and tasty!

After we ate dinner, we left around 5 pm to walk around an outdoor area that had a lot of shops before watching the new Disney movie. In Korea, it is called 호두까기 인형 (just The Nutcracker) but I believe the official English title is The Nutcracker and the 4 Realms. 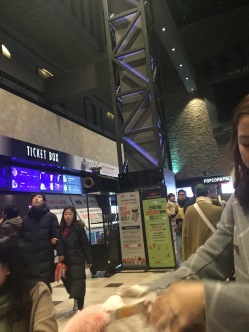 I really enjoyed the movie! It was a cute Christmas movie for the family and I would definitely watch it again around the same time next year. (Comparing it to the cringe-fest that was the Netflix Original Christmas movie I saw the other day with my host siblings… this movie deserved an Oscar for sure!) Once the movie was over, we went to an arcade for a little bit rather than heading straight home. I found these sticker booths and I got the urge to take sticker booth photos with my host sisters. I told them my idea and dragged them into one of the booths. We did not let any of the adults know so we tried to hurry up in case they were looking for us (as they could not see us from outside of the booth). Taking and Decorating the photos was very very fun. We kept shouting trying to get cute poses and as the time hurried us along, we kept panicking. The machine edited our faces and made our eyes super huge! I am not going to lie; I looked like a creepy alien! But either way, it was a lot of fun and I am super glad that I have this physical memento to remind me of this day and of my host sisters 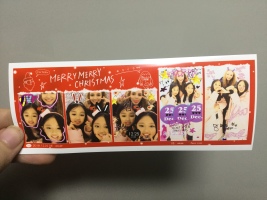 And that was my Christmas in Korea!~ It started off quite emotional but after talking to my family back home and spending time with my host family, I realized how many things I have that I should be grateful for. Christmas away from home (especially since I am just a teenager) was difficult; however, I would not trade it for anything. It was a good learning experience and I am happy to know that I am growing as an individual. I may not have been able to partake in the same traditions I have in the past, but Christmas is Christmas no matter where you are–as long as you are surrounded by those who love and support you~

Thank you for reading!