Wednesday was a full free day to just study study study! Katie and I met up early in 홍대 to find a cafe to study at. I really wanted to take her to the cafe that Josh orders an Americano at every Monday and Tuesday Korean class because the cafe looked small and cozy. (They also had a rainbow cake which I have always wanted to try!) However, I tried going down the same street the Better World office is on trying to find it but no luck… I later found out, from Josh, that I did not walk far enough down the street to the cafe. Oops…my bad. Next time! Cold and ready to just sit in any cafe, we decided to try a bit harder to stay out of Twosome. (Great cafe but we go ALL the time) We ended up going to this cafe called Paul Basset that was attached to a Samsung Store. This cafe was quite bougie (reminded me a lot of an off-brand Starbucks). So as you can imagine, it was quite pricey. But as always, I ordered a green tea latte. Katie and I studied for a couple hours by ourselves before we were joined by some of the 대원외교 (Daewon High School) NSLI-Y students who were getting out for their usual half-day-Wednesdays (I know how lucky! I mean yeah Katie and I are already on winter break but they got half days every single week!) We were joined by Liam, Josh, and Jenna. Honestly, hanging out with them at the cafe was a lot of fun! Not the most conducive study environment; however, laughing along with everyone as we went through grammar points and ranted about absurd vocabulary words (seriously though, 변송기– when a boys voice changes during puberty–is on our vocabulary list) made for really great memories. 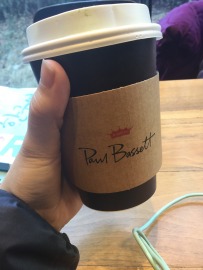 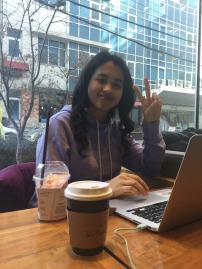 After studying, we all went out to eat at this pasta place near the youth center where Korean classes are held. This place was called the Basement (I believe) and the pasta was pretty cheap –I had Chicken Alfredo pasta for 7,900 won (less than 8 dollars). We all hung out and enjoyed the Western Food (My first taste of real pasta on program!) and talked about so many things: from our worries about the Korean test the next day to our worst injuries during our past. 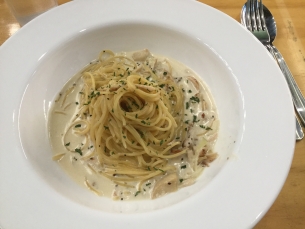 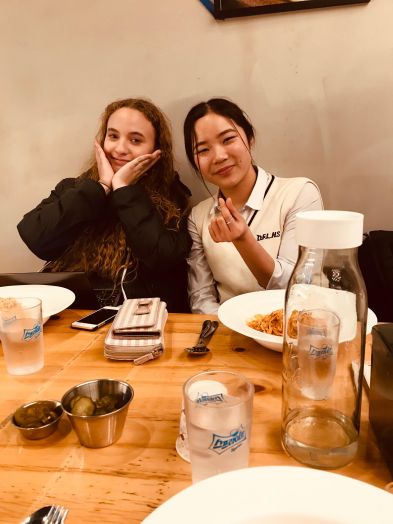 I came home a bit before curfew and hung out with my host siblings for a bit in the living room before hurrying back to my room to study. Because of our less than productive study session at the cafe, I was very behind on getting through all the grammar points from the past two books. I had to plan to review a lot in the morning…which worried me.

I met up with Katie at Holly’s Cafe early in the morning to study. I read over all of the dialogues and paragraphs in our textbook as questions on our tests usually come straight from there. Because we wanted to spend as much time at the cafe grinding, we got lunch from the 편의점 (Gotta love that 산각깁밥 (Triangle Kimbap) life).

Our unit test…was not the best (Look at that, it rhymes!) Jacquelyn ended up not taking the test because she had gotten a really bad cold the day before so it was just me and Josh today. Before we started the test, our teacher told us that it seemed that we had a lot of remaining time left over after finishing the writing test so she added 10 more questions. Not only that, but she also added questions with passages and topics that we had never ever seen before–totally new questions. Let us just say that those two MAJOR changes did not help me at all. She let us know that there were only 2 minutes left and there were 6 questions that I had yet to answer. I literally guessed and picked random answers for those questions because I had no time. I had no time to go back and check my answers–to correct any of my mistakes. Yes, it is true, last time I had enough time to look back over my test one complete time… but what is wrong with that? But I am assuming that although I only looked over my test once last time, Josh and Jacquelyn probably had a lot of leftover time. I can see why our teacher wanted to limit this time… but this was not the way to do it. After the end of the reading test, our teacher asked us how the test was. I just did a half laugh and groan before whispering that time was very limited. (What I did not mention was that there were complete sentences that I did not understand… Or more frustrating was when I knew all the words in the sentence but I still could not figure out the meaning to the sentences… because those are my own problems…)

The writing test should not have proved to be too difficult but for some reason all my knowledge of how to write a paragraph from a source (in this case a graph) flew out the window. I wrote a short paragraph on the difference of priorities of 30 and 60-year-olds without actually using percentages and amounts from the graph. So… there is no way I am doing well with that writing. The other writing prompt was about being born again as another gender (though I wrote that I would choose to be a woman still–but obviously live my life a bit differently.) This one was actually not that bad! I think that I used some good vocabulary and explained myself well? But I know I could have used more grammar points… I feel bad for Josh because I promised to use 변송기 in my writing but I forgot… he fit it in somewhere! Gotta love that.

Josh (what a saint) went first for the OPI, so I got to go second… wow was my OPI a mess! I took several tens of seconds to even full-on minutes to answer certain questions. I could see my teacher getting excited when I would speak at a good pace, stringing good sentences along, and then I would pause not knowing how to continue and she would just stare at me–blankly. At one point she asked me to describe a difference between my American high school and my Korean high school and I tried explaining the college application process. I tried to talk about the fact that Korean students really only focus on one college entrance exam while American students can rely on their test scores, after-school activities, volunteer work, essays, etc. At the end of my OPI, she told me that I should not to try to answer the questions with such complex answers. Rather than trying to use advanced grammar and vocabulary, she said it would be better for me to talk about simple things with no mistakes (She brought up saying things like wearing uniforms, living in dorms, etc). I was taken aback by this at first… I figured that I should try my very best to go out of my comfort zone (language wise) but I guess to get the best score, I should stick to trying my best at having no errors in my speech.

My roleplay was about me trying to return a broken camera that arrived at my house with many faults. It went kind of okay? I used the wrong word for to return and to keep (I used synonyms that are only acceptable in other situations), so that was just great 🙂 That was sarcasm… Anyway, to sum it all up, it was not my best test. I know I am not moving up so I felt pretty disappointed at the end of the class period. I had studied very hard (especially memorizing so much vocab) and I just did not perform… In order to make myself feel better, I went out to eat waffles at 와플대학 (Waffle University) with some of the other NSLI-Y girls: Katie, Hunter, Shannon, Alix, and June. 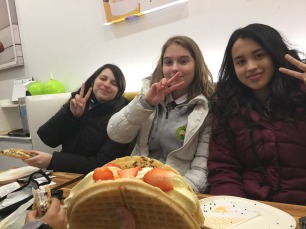 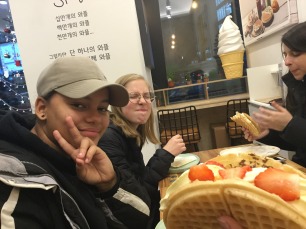 After hashing out our feelings while stuffing our faces with carbs and gelato, Katie and I went to Twosome to hang out for a bit more to talk. We spent a little more than an hour just talking through our feelings, our worries, our hopes, etc. It was really nice to be able to express everything that was on my mind to Katie–I am so thankful that she is here for me. (And I will always be here for her too~)

After leaving the cafe and heading into the subway, I realized that I was missing my wallet! I almost started crying because I got so scared. My wallet has everything: my state ID card, alien registration card, debit card, all my money, etc. Katie and I ran back to the cafe to look around the floor of the area that we were sitting at. I wanted to ask the baristas behind the counter if they had seen it but I was panicking. I saw that it was not where we sat and so many eyes were on us too. Until, finally, this guy sitting next to us pointed to the counter and I realized he must have turned it in. I ran up there as quickly as possible and asked one of the employees if they found a wallet. When I got it back, I almost cried again–from literal happiness! What a night!

I had no plans to leave my house today and my host family was all out and about or at school, so I stayed in for the majority of the morning. I cleaned my room (a little bit… I need to start packing) and wrote lots of blog posts.

Eventually, I got tired of staying at home so I left and went to my favorite cafe here in 고양시. I ordered my $3 green tea latte and stayed there for almost 5 hours– mostly working on writing blog posts as well as editing posts and scheduling them to be uploaded. The cafe was slightly busy but the white noise was appreciated. I find that rather than listening to music, I like to listen to actual voices when I am trying to concentrate on something. The lady who (most likely) runs the cafe even asked me where my friend was (meaning Katie) and I said that she was busy. I thought this was cute~ She obviously remembers us!

Later that night, I watched Santa Clause 3 with my eldest host sister and brother. We gorged on tortilla chips and could not help but rewind the bloopers more than 5 times because Tim Allen is my spirit animal and I love him as Santa Clause!! (Oh and the siblings thought he was really funny). It was a lot of fun~ I always watch the Santa Clause trilogy, so it was nice being able to still do that here–even after Christmas.

That is all for this blog post! I know it is a mish-mash of a couple days but I hope that it is alright~ I have been really behind in writing these posts and honestly, there is not much to talk about… but I hope you enjoyed! Thanks for reading!

Authors Note (05/27/19): Officially back in America! It has been about two days now. I am going to try to crank out blogs more frequently now that I am off NSLI-Y and will hopefully have more time. I also want to post a reflection, so I will try to get that out soon as well.  Thanks for supporting me while I was actually on my gap year! I never imagined that keeping a blog would be this tough but believe me, for those that can actually keep up… they are literally superhuman. Until my next post! Bye~