I started the New Year before the sun even did! Literally, I woke up at 5:15 am in order to watch the sunrise with my host family; therefore, if you think about it…. We woke up to a new year before the sun! (I do not know why I think this is cool, but I do.) Apparently, in Korea, it is quite a common tradition for families and couples to go watch the sunrise on New Year’s Day. I am not exactly sure why they find it so meaningful but I assume that it has something to do with the fact that sunrises are known for symbolizing a new beginning. When I first woke up, I was immensely tired and felt that I was not in the mood to go stand out in the freezing cold to catch only a few seconds of the sunrise but after experiencing everything, I understood why this tradition is considered so special to so many people.

But anyway, we left the house a little bit before six and were met with a good amount of traffic on the streets. I was confused as to why we left so early seeing that the sun was not going to rise till after 7 am– closer to 7:45 according to the internet. I soon found out that it was because we would be eating breakfast at a restaurant and then climbing up this mountain (or someplace that people hike???) before seeing the sunset.

For breakfast, we all piled into this restaurant that was fairly empty and I was shocked to see that it was open. I wondered if it was usually open this early during the weekdays or if this was a special occasion seeing that it was New Year’s Day. We had some light noodles and 만두 (dumplings) for breakfast before heading up to the sunrise viewing. There were so many people! Actually, the huge amount of people proved to be kind of nice because it was as if we were all huddled like penguins waiting for the sky to brighten and the sun to rise. However, because there were so many people (and we did not get there too early), we could not get a spot right where the sun would rise (I mean the spot for the best viewing if that makes any sense…) and so we had to climb up this side part of the landscape which was had very crumbly dirt making it hard to climb and stand still on. 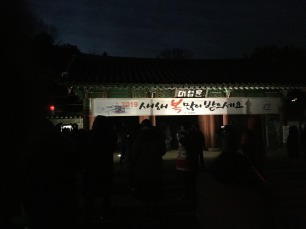 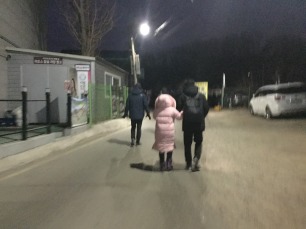 However, being surrounded by my host family and seeing all the togetherness around me made me immensely happy. We had a perfect view of a bridge across some water and with the lights on at dawn, it looked like a picture perfect moment. I looked out to the sky and thought about everything I was grateful for in 2018. 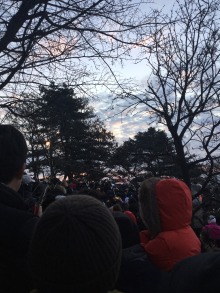 I realized that I have been so lucky and so blessed to have had such an amazing year. A year full of dreams coming true, great times spent with people whom I love, as well as lots of firsts from trying new things! Everyone around us was chatting and I goofed around with my host siblings for a bit too until the time came when the sun was really coming up–showing a beautiful bright orange color. Everyone quieted down and took in the view of the sunrise (and many took photos too which kind of disturbed the viewing with a bunch of loud camera shutters, but who can blame anyone for wanting to document this moment?) Everyone in my host family made a wish when they saw the sunrise. I did not know that this was something that can be done (or is usually done) but I can see how observing the sunrise can be seen as (reminder of the beauty of the world and the gift that is waking up every morning) a prime opportunity to make a wish. (I would say that it should also be as popular as wishing on shooting stars! But I guess that because they are less rare (actually you can call them frequent!!) it is not as special.

I made a wish too, but I refused to tell my host family about it because you know what they say: if you share a wish, it will not come true!

After watching the sunrise, we came back home and all immediately went back to sleep. It was nearing 8:30 am at this point and everyone was exhausted from the combination of staying up late, waking up early, and standing outside in the cold for quite a bit of time. I quickly texted my friends telling them that I was going to bed but that I would call them after my nap so that I could be a part of the Secret Santa Gift Exchange and watch the countdown in Chicago with them all. Seeing all my friends made me so happy. I have not gotten the chance to talk to all of them in such a long while because of our busy schedules and the different time zones (truly proving to be a pain in my rear end). Since their winter breaks from college started, I have been feeling major FOMO (Fear of Missing Out) from seeing all their posts on Instagram and Snapchat of them just hanging out and partaking in our friend group traditions (like eating pancakes at our local 24/h diner) or just things we have always wanted to do (like going to an Escape Room!) I know in particular there was a photo taken at a restaurant and my friend had put a Snapchat filter on it that read: New Year Same Squad. It was such an innocent add on to a really cute photo but of course, it made me feel sad in a way. I truly love my friends and I do not believe that we are being torn apart because of this but I do feel extremely disconnected to them due to the distance between us. They have the time to share with each other so many stories and updates and I am left feeling like I know nothing when things are brought up. These new inside jokes make me feel like an outsider… Or maybe a bit less obvious, there is a divide in where we are in life. They will have finished their first year of college while I have done something just as growth-invoking: a year abroad.

Wow, that was such a long tangent. (I am currently sitting in a cafe right now with Josh and maybe because I am being influenced by this deep/thought-provoking music, I am feeling the vibes to just dish out all my emotions and thoughts on this blog post right now… Anyway, since I brought my fears and the negative things that I have been feeling, I do want to bring up that it is not all bad. I like to think because I have such amazing friends, I have been reassured and reminded time and time again that they will always be there for me. In this past week, I video called one of my friends and she never failed to let me know how much she misses me. She told me that something always feels off without me there, and she even said she knew that they would have been successful with the escape room if I had been there too. My other friends too continue to update me on their lives through text (or by Snapchat video) and I really appreciate the extra effort they put in for me! Anyways back to my day! (and not my feelings!)

Earlier in the night, my friends came over to my house to surprise my mom with chocolates and I later heard from my mom that she was almost in tears with the kindness they showed her–she had missed seeing them around so much. My friends picked up my package with my secret Santa gifts and snacks for all of them to try. When we video called, I was so happy being able to see how excited my friend Kara got when she opened all my presents. They were definitely nothing too special but I thought she would use them well!

I got to watch the countdown with them and as the countdown reached 1, all my friends screamed Happy New Year and let off (what is the verb for this?) confetti poppers. I ended the call soon after that and also talked to my mom for a bit.

For lunch, my host family and I ate 떡국 (rice cake soup) which is a soup traditionally eaten during the New Year. In Korea age works a bit differently when compared to American age. To describe it as simply as possible… Koreans are born as 1-year-olds rather than 0 and then they increase in age on New Years Day rather than on their actual birthdays. (Yes, they still celebrate their birthdays, however.) Because of this system, you have to either add 1 or 2 years to your current age to get your Korean age. For example, I am currently 19 years (My birthday is Nov 4th, 1999) and my Korean age is 21 years old. I gained a year today! Before New Years (back in December) I was only 20 in Korean age. Before my birthday (let’s say October!), I was still 20 in Korean age even though I was 18. This is probably so confusing but I tried!!

Once you eat the soup on New Years Day, you get one year older!

The rest of the day was spent spending time with my host siblings (watching a Barbie movie and then several episodes of a Korean tv show about the body? It was very educational.) as well as cleaning my room and finishing up all my packing. We played board games and I can finally say that I have won a round of Rummikub!! YESSS! 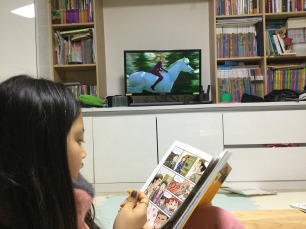 Our last dinner together was a very special one. There was a really big spread of all types of food. The main dishes were 삼겹살 and 회 with an assortment of veggies. Before we began eating, my host dad said that they had prepared a 진수성찬 for me and then asked me if I remembered what that was. I could not help but smile and think about the good memories from the 추석 holidays when my host dad first taught me that word. (Definitely, one of my new favorite Korean words since it is associated with such great memories. Should I do another favorite words blog post? Link to the first one: here) We also did a toast before starting to eat. My host parents said a few things about enjoying having me and I also thanked them for allowing me to feel comfortable with them and all the memories we were able to make with each other. Dinner was bittersweet, but I knew that I would surely be back soon. Hopefully, the next time I come back, I can make gingerbread houses with my siblings!

And that was my New Year’s Day in Korea! (Though I will admit that a large majority of this blog post was just me explaining my emotions but what would a realistic blog about my experience be without me getting all personal out on here?) Thank you for reading if you even got this far! Till next time~