Friday was my first full day living with my new host family. Both my sisters left late morning to go to 학원 for school and work and my host mom was going out to meet up with a friend. She gave me money to buy lunch at Subway and at the time, I was 100% set on doing just that. However, as I walked towards the Subway attached to the train station, I started getting really anxious. I’ve only ordered from Subway in America once and that wasn’t exactly a beloved memory. The thought of having to do that in Korean really terrified me… I stood in front of the subway for a couple minutes texting Katie about my irrational thoughts. I thought I had mustered up enough courage to go in but then a new worker came in {probably from a break or from using the bathroom} which scared me again. Let’s just say I ended up not going to Subway and instead got lunch at a 편의점. Yes, I know… I’m a nervous wreck. 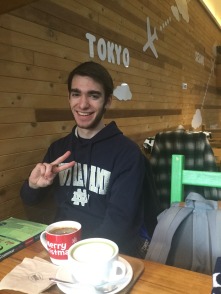 Josh was so kind as to come over to my subway station so that we could study at a cafe together. Honestly, I needed the company as I was feeling quite lonely. We walked around the area for a bit which made Josh tell me that he agrees with me concerning the fact that he does get more stares in 고양시. Maybe because I’m not used to the area yet but walking around the mall type area around my train station makes me so uncomfortable. I feel like the staring is triple what I experienced walking around 화정역… I don’t know… it may all be in my head… but it almost makes me not want to go without someone being by my side. 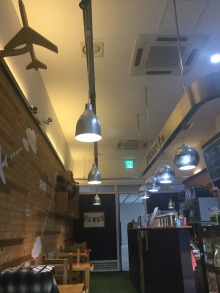 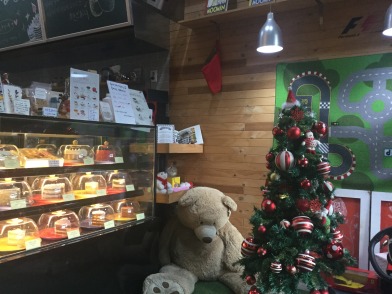 We found this cute little cafe that was travel themed— a trip to Japan. The walls were decorated with planes and famous Japanese city names and even the menu was written in Japanese {though, of course, there was Korean too.} They had really pretty cakes too but they were pretty expensive… I just stuck to my day 1: a Green Tea Latte. Josh and I met up to study but I wasn’t really in the mood so I just worked on a blog post. Josh actually studied though! He’s been going ahead by learning things in our grammar books. I would definitely do that too… but I need to solidify the things I still don’t know very well now before trying to learn new things just for fun. 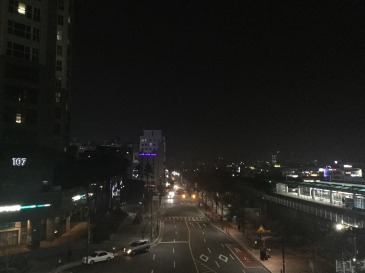 Nighttime view from the subway station

The apartment complex has light-up LED roses! So pretty at night!

I came home just in time for dinner and ended up eating 오뎅우동 {Fish cake Udon} with just my youngest host sister. We talked together while sitting at the kitchen table which was nice~ She told me more about Andy and when they got him as well as more about her mom’s work {and how they discovered NSLI-Y and hosting}. It was some nice conversation and although I could not understand a good amount because of 모르는 단어 (vocab I do not know) and because my host sister did not slow down to tell me all the details but it was still fun. I like that she can feel comfortable talking with me~ (And that she does not lower her speech for me.) 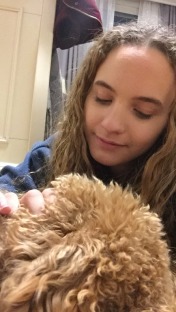 I love my host dog!!

Katie and I went out for brunch late Saturday morning at Flapjack Pantry. We both ordered pancakes and were more than full after devouring the sweet fluffy goodness. Even though I’m thousands of miles away from my home, I can always find comfort in pancakes~ I have three places I’ve tried here in 홍대 and I’m only hoping that that number increases by the end of the year~

After we finished eating, we thought we would try to take on the cold and walk around the main shopping and busking street in search of some cute sweaters— we have gotten pretty tired wearing the same things over and over again already. We were lucky {maybe our wallets weren’t though?} and got a couple cute things to spruce up our wardrobe. {Although packing these sweaters back to America will definitely take some skills due to my limited suitcase space…}

After a while, my fingers felt like they were going to fall off and my ears burned like crazy {should have brought a pair of gloves and a hat… rookie mistake} so we decided to hop to a cafe to get a warm drink and to study for a bit. We went to this hot chocolate cafe that Katie recommended which was honestly like heaven. The drinks were pretty expensive and the interior seemed to lack adequate heating; however, the drinks themselves made up for everything else. The chocolate was so rich and sweet and they included whip cream, chocolate drizzle, and a marshmallow! It was perfect~ I’ll have to go back~~

We separated after that to have dinner with our host families. When I got home, my family had eaten a lot earlier than usual so I ate by myself while my host sisters just chilled in the living room. The rest of the night was spent doing my winter break homework: the reading and writing section of a past Topik test. Let’s just say that I tried my best and attempted to finish it but to get through those reading passages… I needed a lot of energy {and motivation}, which I did not have. So I gave up early and started a drama on Netflix. I still had a couple of days left of break so it was no big deal. 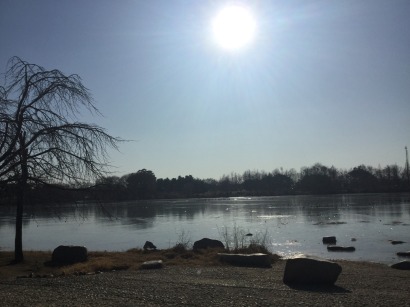 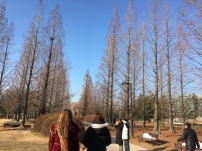 Sunday was Lake Park Day!!! One of the things that 고양시 is most known for is their huge lake park that has a musical fountain too {performances are only spring through mid-fall, through}. I actually had researched it a bit when I did a project comparing 고양시 to my hometown. We decided to go out and walk around the park in order to give my host dog 앤디 a break from walking around the same old apartment complex day in and day out. 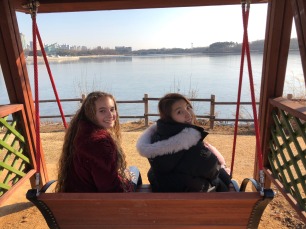 I went with my host mom and eldest host sister and it ended up being a lot of fun—like I had hoped~ We calmly walked around the lake and although the foliage was all gone, the remaining nature was still so nice to look at. There are not many places in Seoul, or around it, that I’ve been too with so much nature! I felt swallowed by large trees and I loved every second of it! Also, the weather was so nice! Still chilly enough that it required a heavy coat and gloves but not cold enough where being outside felt like a burden. 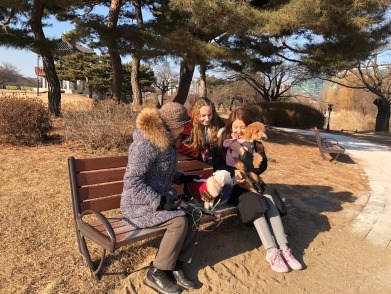 There were also so many cute dogs!!! 앤디 really hates other dogs {particularly big dogs} so there was a lot of growling and barking {but that is no different from my dog Biscotti back home!} My host mom also took lots and lots of photos~~ I appreciate it since I definitely want to be able to remember this day with physical pictures to look at.

We came home quite late and so lunch was around 4 pm and we ended up not eating dinner. I spent the rest of the night finally finishing my Topik reading section!!! {I figured I could putt off the writing for the following day…} which felt good. Looking back through the test… I was in shock! On some passages, it seemed as if I highlighted every other word because I didn’t know the meaning. It seemed so difficult… it made me doubt my abilities to take this test seeing that it tests such high levels too. Having to try my hand at that {and seeing how much I honestly didn’t know} really hurt my self-confidence.