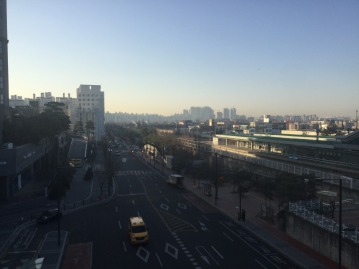 The walk to the train station (in the morning~)

Monday morning, before our orientation for the Cultural Explorers Project {the name of our winter break project}, Katie and I went to a cafe near Better World to work on our Winter Break work. We went to a cafe called 별빛 (or something or other) which I’ve been to on several occasions with Josh during break times in between Korean class sections. I wanted to go there because it’s adorable, the atmosphere is cute, and they have rainbow cake! Something I’ve been wanting to try~ So with my usual order of a green tea latte, Katie and I shared a slice of rainbow cake.

At the cafe, I started the longer 쓰기 that made up the writing portion of my practice Topik test. It was about the importance of communication and finding a good method for maintaining relationships, etc. I got more than halfway through it so it was a productive cafe date.

Eventually, lunchtime rolled around but we stayed there and ended up not really eating lunch so throughout the orientation, we snacked on the prepared crackers and treats from Better World. Arriving at the presentation room was quite awkward at first, we all stared at the Korean college students and were scared to interact with them so the room was divided in half: one side of the room being NSLI-Y students and the other side was made up of the supporters. This awkward tension was definitely predicted by the Better World Staff as we started the orientation off with some bonding activities. The first thing we did was walk around the room with pieces of paper and gave them to others in order for them to draw our face; however, the catch was that they could only draw one part. For example, Shada drew my hair and then Jack did a whack job drawing my eyes! Luckily, June saved the day and fixed my eyes which was highly appreciated– my drawing actually kinda turned out nice. 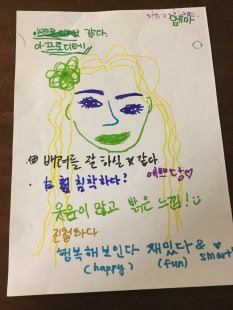 The next thing we did was walk around and write our first impressions on each others paper. I tried my best to get to talk to the supporters because I wanted to meet them as well as practice my Korean by writing their impressions in Korean. We shared some of them in front of the whole group and 주연쌤 started making fun of something one of the male supporters had on their paper which was what I wrote! I wrote that he seemed to like to travel and she was like How would you know that? I was like his aura!!! Apparently, she did not get the same vibe as me.

We did a few more bonding activities like tongue twisters and getting into groups to copy pictures of people using their bodies to create certain shapes? Hard to explain…. Eventually, we found out which supporter was in our group through a very cheesy introduction center and lots of drum rolls. Katie and I were paired with a female college student named 혜린. She seems so kind and is very adorable! At first, we were all pretty shy together and since Katie and I are so close (and we show it too…) she must have felt a bit awkward. However, as the orientation continued, we seemed to get more comfortable with each other (By the end of this project, I hope we can stay close! Which means… periodically hang out until we go back to America!) Our supporter is an English major so her English is really good. She started speaking to us only in English because she assumed we knew no Korean and since the topic is pretty difficult to communicate in my limited Korean skills, Katie and I responded to her mostly in English. Hopefully, (more hoping) we can use our time together to practice Korean more, too!

After getting in a group with our supporters, we did a few more bonding activities like playing charades (Our theme was sports and we actually won! We answered the most questions correctly… unfortunately, we did not win a prize, though.) as well as making shapes with ribbon while being blindfolded. Yeah, it was as confusing as it sounds. Once the fun icebreakers were finished, we got to work. We all split off into our groups and created a group contract or 약속 that we need to follow during these two months. Our group included going to pretty cafes every meeting, having fun, and putting in our best effort. We also presented to the other groups the topic we are planning on focusing on for this research project which is the quality of life of single mothers in South Korea (especially due to the surrounding stigma). We came up with the group name 독닙여성 which translates to independent women because that is what we are!

Eventually, we all finished up with the mandatory activities and it was time to all have lunch together. We ended up eating 만두전골 at the same restaurant we ate at during the beginning of the program which was really nice. I recognized the food and the area we sat in which brought back the good memories. However, it also reminded me of how much time has passed which brought up some bittersweet emotions to the table. I sat with Katie, 혜린언니, Addie, Jenna, Josh, and Addie & Jenna’s supporter. We just chatted during dinner in a mixture of Korean and English about our majors, our Korean class, favorite foods, etc. It was a nice dinner with delicious food and good company~

Rather than going home right away, I decided to stay out with a couple more people to enjoy the rest of the night (as well as take advantage of the late curfew). I ended up going to 설빙 and shared a 망고 and 인절미 빙수 with 유빈, June, Kaitlyn, and Josh. Mckenzie and Katie also tagged along to hang out with everyone too. Our little hangout was fun and I got to meet Alix & Jacks supporter 유빈 who was really nice! Kaitlyn, 유빈, and I took photo booth pictures at the machine in the 설빙 and although the pictures were low key not cute, I will forever treasure them! Especially the first picture because josh tried fitting into the booth which did not turn out well but half of his face in the photo really makes it perfect.

Tuesday was not a super exciting day. Katie and I would be having our first CEP meeting at Blanc Bakery (honestly my favorite place in 홍대 it seems) with our supporter 혜린. I was excited to finally get to start our project because we have only been talking about it for so long, but then again, I was nervous because I knew it was going to be a lot of work and with everything else going on… it would be a struggle! 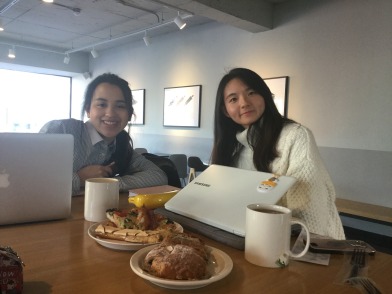 During this meeting, we munched on pastries while filling out our project proposal which outlines our topic and what we wanted to do for our project and the presentation the next month. 민정쌤 came to hear our ideas but let me just say… that the consultation did not go well. I think it was a mix of us still not having finished our project proposal and knowing the exact details of what we wanted to do and the fact that this topic is both difficult and sensitive to others which caused us to have a pretty tense discussion with 민정쌤. We were feeling anxious and stressed because things did not seem to be going well and after 민정쌤 left our group, we felt a bit dejected about all that we had done. We did our best to finish up for the day and make plans for the next meeting. 혜린언니 and I left Katie at the cafe because she wanted to keep doing homework while we left to go get lunch separately. I ended up grabbing 김밥 from the 편의점 and just ate at CYC while waiting for Korean class to start.

However, as class time was approaching, I was all confused as to why my teacher hadn’t shown up yet. Then, Kaitlyn informs us that our teacher was going to be an hour late so would be having class from 3-6 pm rather than 2-5pm like normal. We were all really confused because both our teacher and Better World said absolutely NOTHING to us! We were a bit salty because we could all have gone and had a nice lunch together if we had known earlier. We called 소야쌤 and she seemed to have simply forgotten to tell us. 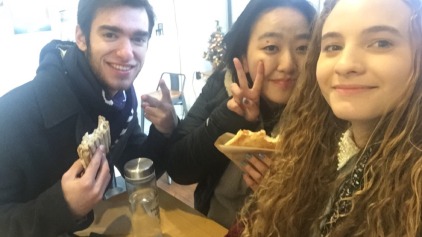 In order to pass the newfound time, I went with Josh and Jacquelyn to this tiny little grilled cheese shop owned by a Russian Expat living here in Korea. The prices were very low! Only $2 for a normal grilled cheese! I already had 김밥, so I didn’t get anything… but I know I will be back! 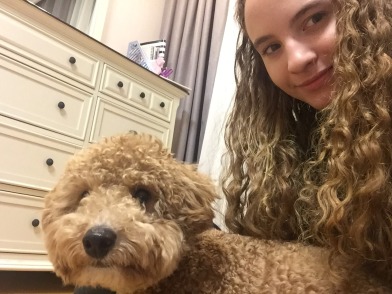 That is all for this blog post~ I hope you enjoyed. Sorry for the abrupt end to the second day but I ran out of photos from then to jog my memory and since I am writing this post almost two weeks after it happened (because I just have not had the chance to keep up to date with my writing) I have forgotten what I did the rest of the day–including the happenings in Korean class. I cannot remember anything from it… I am going to try really hard from now one to be good about writing! Keeping these logs of my days are really important to me so you heard it here first, keep me accountable? Thanks for reading!