On today’s agenda: going to a youth center in 마포구 to learn about the independent community service we would be conducting there throughout the next two months (and maybe even after). This was the same youth center that I volunteered at during their Halloween Festival (that blog will be linked here~). We all piled into a large presentation room and received all the information about the service we would be doing. We also got to watch an introductory video of the youth center. The two options we had were a cultural introduction activity on Wednesday afternoons and eating dinner with and walking home children from the center on Monday, Wednesday, and Friday nights. We would get into groups and decide which activities we wanted to participate in at a later date. We were told that the community service activities were not mandatory under our NSLI-Y program but were highly recommended. Therefore, not everyone chose to participate in them.

Before we left the center, we got a quick tour although most of it was of areas that we would most likely never go to? I was a bit confused but enjoyed seeing the facilities they offered to the community. They also showed us the office that we would need to go to in order to pick up reflection and log in sheets to keep track of our hours while we did community service.

After the orientation, we all rode the subway back to 홍대 as we still had class this day. I wanted to go out and have a nice lunch with some of the other NSLI-Yians so June, Jacquelyn, McKenzie, and I went and got pizza at Pizza School. We originally planned to get 돈까스 from this famous place near the Better World Office but there was a line from outside of the place so we gave up. Pizza school was close by and really cheap so we opted for that. {I knew that I would be getting pizza with my host sisters the following day but they all wanted it, so who was I to say no?}

We ended up ordering a spicy beef quesadilla pizza and a side of garlic fries which came out to be $5 per person which was a very cheap lunch! {2 dollars below the allotted lunch stipend!} After grabbing lunch, we all headed back to the youth center for our classes. We started a new chapter that day which included a grammar point I’ve been curious about as well as one I have learned already—at 숙대. In fact, I’m surprised it showed up as late as it did in the textbook series. I also studied the vocab for this chapter before class so I felt good throughout the class and was able to actually follow along with everything the teacher said more or less. 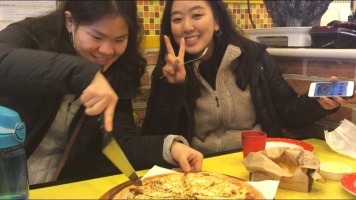 In class we also had a fun conversation about common expressions Koreans use like 와, 세상에, 아이고, 어머, and more. I always like when the reading passages we read are interesting and applicable to daily life here in Korea.

After class, I went home right away to have dinner with my host family. I rode the train home with Josh which has been our routine as of late because we both have been going home right after class ends. He honestly makes the long commute enjoyable as we are able to chat the whole time.

My host mom wasn’t home for dinner so I just ate with my host sisters which was pretty enjoyable~ For dinner, we had my favorite Korean dish: 잡채. I think that for some reason, I feel more comfortable talking to my sisters when my host mom isn’t around? Maybe because we can just fully be ourselves? Maybe cause she’s older? I’m not too sure but it feels like that just a little bit.

During dinner, we talked a lot! And I did really well at keeping up with everything they said and I even said my own opinions! Lots of good practice at speaking Korean! We had some really deep conversations about the differences between America’s education system and Korea’s, specifically talking about the 수능. My sisters had very interesting opinions on the matter because they both did homeschooling and my older sister didn’t take the 수능. We also talked about my Korean high school and I told them I could not even imagine going to school there.

We also discussed work life in Korea because they asked me what I learned in Korean class today and I told them that we are focusing on 직장 생활 {work life}. She told me about the long hours and how stressful it is. I don’t exactly remember how it was brought up but we also talked a bit about why the birth rate is decreasing in Korea—basically why Koreans aren’t having as many kids as other developed nations or as much as they did in the past. My host sister told me all about the expensive parenting costs and young people not wanting to sacrifice work or freedom which was very interesting to hear. I was really happy that we could have such meaningful conversations together~

That is all for this blog post! I hope you enjoyed~ During my summer break, I am trying my best to upload as many blog posts as possible because I want to the new, incoming AY students (as well as the new batch of applicants) to be able to read about my experience and get a feel for what to expect during the AY program. After a couple more diary posts (I would consider the ones about my daily life as a sort of diary more or less.), I want to start posting more informational posts like A day in the life of an NSLI-Y AY Student in Korea during the school year and during the winter break and such (Especially because my day in the life post from the summer program (linked here) was and still IS very popular. Anyway, thanks for reading! Till next time~