Today was just a study day. I had no plans to meet up with anyone or leave the house quite frankly. I had a long list of tasks to finish for Korean class on Monday so I decided to just be productive at home. One of the things that took me forever to finally get a move on and start writing was my essay assignment on how to overcome cultural differences. I wanted to talk about what issues can arise from cultural differences and how this awkwardness can be avoided if we adopt a learning/growth mindset and not blame ourselves for making mistakes. I even talked about some of my own experiences and how I dealt with them. It took me a long time to organize my thoughts before writing but once the pen hit the paper, I was able to write it all in a good amount of time. Once my ideas started flowing, it was a pretty quick assignment! 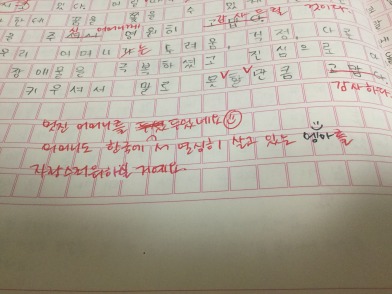 Eventually, it was 7 pm and my host sister and I went to an arcade that is on the basement level of this mall-type outlet store thing (wow look at me being able to describe things with such precise and advanced vocabulary) right next to our subway station. When we first got there, we tried two Virtual reality machines that were next to a children’s play area. The two that we tried were simulations of a roller coaster and a bicycle rickshaw ride on the Great Wall of China. Although you would assume that the roller coaster ride would be more intense and exciting, I found the one taking place in China to be more fun! There were more bumps and turns and most of them were surprises! With the roller coaster one, you could see ahead of you when the drops were going to happen; however, the rickshaw ride included a lot of sudden surprises because you could not see the path laid ahead. 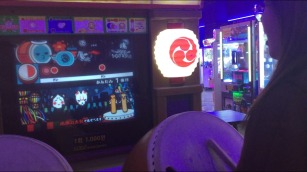 After trying VR for the first time ever (did I mention that?), we went to the arcade that was right across the way. I was really excited to walk in and see all the games and neon lights. Arcades really are not that popular in America? (I believe anyway). Like, if I wanted to go to one, I would have to go out of my way to find a place. Because of this, I have not really been to one since I was little… and that arcade was probably Chuck E. Cheeses. We played the classic basketball game, some claw machines (won nothing :/), some Japanese fighter game, and then DDR! I have not played a DDR game since middle school… when I went to one of those birthday parties that took place in an arcade/ laser tag facility. But it was so fun although very very difficult! When I played it for the first time with my host sister (to the song Pick Me Up from that Produce 101 show or something), I got an F as my score. I redeemed myself with the next round! We did another song from some random girl group, and I got a C rating. Not good by any means but an improvement nonetheless! We ended the night with some really cute sticker photos~ I really enjoyed the time that we spent together~ 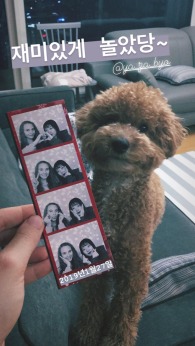 Stolen from my Insta story~

Today I met up with Katie early in the morning before class to study for a bit. Because our monthly test is this week on Thursday, we are getting on that study grind! We visited this cafe called Coffee Slob after hearing about it from the other NSLI-Yians that had their supporter/research project meetings there. We were there basically right when it opened, so there was no one there! It was nice having such a spacious cafe to ourselves. The prices were also pretty cheap! Much better than cafe chains like Twosome Place and Holly’s etc. We worked there for about two hours before heading back to the youth center to have our convenience store lunch before Korean class.

I brought over the snacks I got from my Christmas package to the youth center and I shared with my fellow NSLI-Yians. To eat the peppermint Oreos, we went to the convenience store to buy milk cartoons to dip our Oreos in ft. the use of a straw.

Korean class was a blur. I really do not remember what we learned. I am pretty sure we learned two grammar points that I already knew because I taught them to myself outside of class. Besides those points, we focused on doing reading and listening passages from the textbook. We also learned vocabulary for the next chapter although we would not be finishing the entire book by the unit test on Thursday. We planned to learn the last two points on the day of the test. 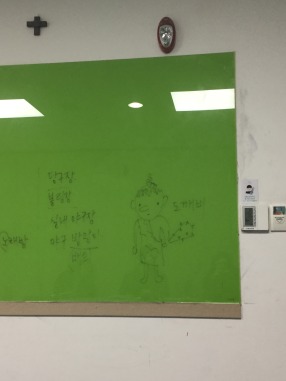 My Korean teacher always impressing us with her cute drawing skills

After Korean class, I wanted to go to this really pretty restaurant called D5 that I saw in a Youtube video about cute places to eat at in Hongdae with Kaitlyn. The last time we tried going, we thought it was just closed for the night so we came back today to see if it would be open… Alas, I think the entire place closed down? Wait… unless they are usually closed on Mondays? Not sure… I will have to check the reviews again because I know I saw one from two weeks ago on Mango Plate… It was kind of a pretty big disappointment if I am being honest. 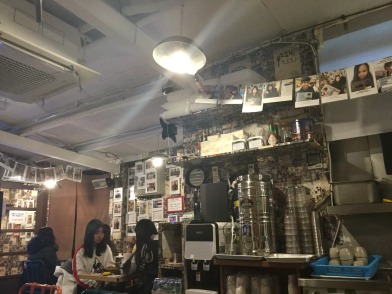 Instead of going there, Kaitlyn took me to this really nice restaurant that was also kind of in this sketchy alleyway that her supporter from her summer program introduced her to. The name of the restaurant was 그남자의볶음밥 (That Man’s Fried Rice.) The place seemed to serve really big portions of kimchi fried rice with a variety of ingredients that could be mixed in for pretty cheap prices. However, the cool thing about the place that really made it unique was that there were ten ways (ten commandments if you will) to get your meal on the house! They were not too hard that no one would be able to do it but they were not too easy that every one that came could qualify for free food. For example, they included things like

Actually, one of the commandments is sharing the same birthday with someone else. On our AY program, we have two pairs of people that have the same birthday… is that not crazy? Josh and Kaitlyn share the same birthday and so do Jack and Jenna. Not only that, but all of their birthdays are in February. All four of them really need to go and get their food for free!!! 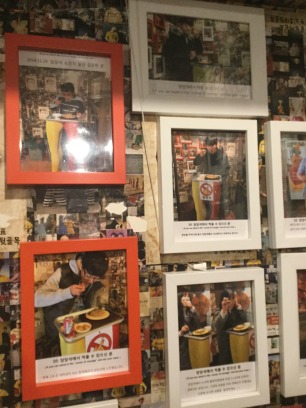 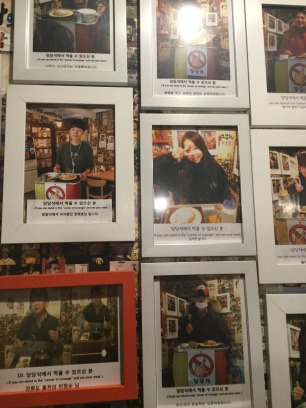 There also used to be a corner where you could decide to eat your meal by yourself in the corner-of-shame if you will and get the meal for free! I believe they probably stopped the practice because so many people were doing it. In the entryway up to the restaurant, the stairwell was decorated with picture frames of people that took the challenge.

The reason this picture exists because Kaitlyn kept trying to tell me that I did not finish my meal because there was SOME rice still left on my plate… What do you all think?

After eating, we went and hung out at a cafe called Cafe Anne House which was spread out like a house. The area had little rooms that you could sit in beside the normal tables that are set up like any other average cafe. Also, the decorations were very American House-like. The atmosphere was really nice! Kaitlyn and I just hung out there enjoying our drinks and talked for an hour or so. We were not done eating after that–we went to get 호떡 (Korean style pancakes) at one of the street vendors. We originally planned to get these really cute heart-shaped 호떡 but the wait was 5 minutes and there was a line, so we went somewhere else to just get normal ones. I absolutely love 호떡! I know that they disappear quickly once winter is over so I am trying to treasure them while they are still around~ 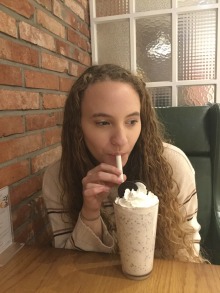 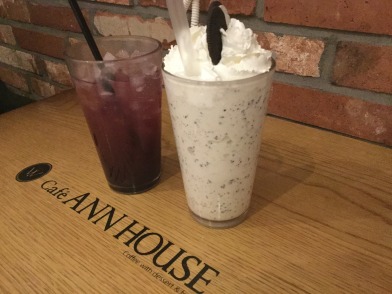 That is all for this blog post! I hope you enjoyed~ Thanks for reading. I hope that these winter break posts are a bit more interesting than my boring old routine following posts while I was attending school (Plug: Day In the Life Post Here). See you soon!~