Friday was our second big community service activity as one cohort. This activity consisted of delivering cylinders of coal to mostly poor elderly homes that did not have electric heating. They counted on the coal to heat their houses during the winter. We were brought to the area surrounding 영등포시장 (yeong-deung-po market) which is known for having a large elderly population. We met the man in charge of the community service activity and he prepared us by explaining directions and handing out materials that we would need: gloves, aprons, etc. 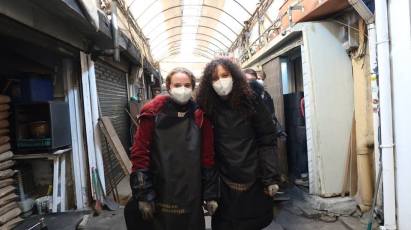 2 hours were designated for this activity but because we were so productive, we ended up finishing in 1.5 hours! For the first “shift” or “session” if you will, I was in a group of 4 with Shada, Jenna, and June and we moved a stack of the coal to a little storage area near the side of a house. The other 12 students did a separate house and that had a farther distance between the coal drop off and the destination which is why they needed more people for the assembly line. 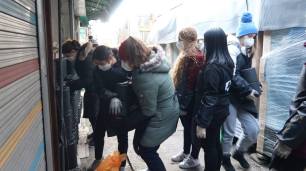 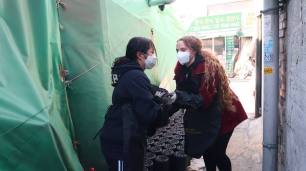 After we finished those two houses, we moved onto the last one which involved carrying the coal through a narrow alleyway. All 16 of us did this one but rather than doing an assembly line, we just had each individual take a cylinder of coal to the storage area while the boys stacked them with help of the director or leader of the service activity. It was difficult labor as the coal came with a lot of powder and sometimes the dust was too much. Additionally, the cylinders were quite heavy. Moving them from one place to another wasn’t too hard but when I had to pick them up from off the floor to hand them to the next person {2 each} my back started hurting. 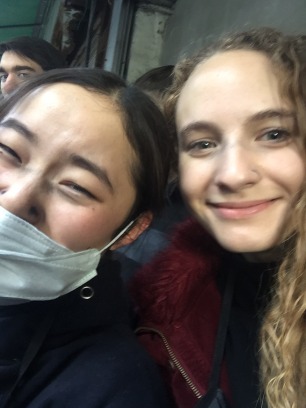 But before we knew it, we had finished! It was a nice little rewarding experience. We didn’t get to meet any of the people we were actually helping which was kind of disappointing. I think it would have been better if we got to see the people that would be using the coal.

We also got to take home keychains that were mini coal blocks with faces on them!

After the community service, a big group of us decided to go to the market and have lunch there. It was literally huge! Much larger than 통인시징 (Tongin Market) but then again that’s probably why it has its own station! Katie, Alix, and I got these really delicious huge 호떡 (Korean pancakes sold as street food)! They were of the thicker variety of the pastry known as 찰호떡. They were a dollar each and 100% worth it. In fact, I was pretty full from just eating that!! We kept walking around and we ran into Shada who showed us this really good place to buy 만두 for cheap {only 2천원 = a little less than 2 dollars}. That was my lunch~ Because my commute was over an hour-long due to me having to wait 20 minutes at 공덕역 {The next train didn’t go all way to my train station so I had to wait for the following one}, I ended up eating my dumplings while sitting on a bench inside the station. But honestly, it was really good so I didn’t mind the interesting circumstances. 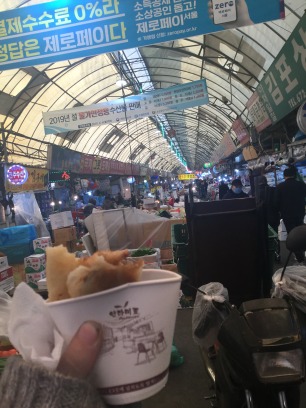 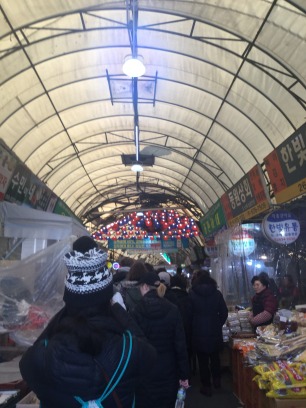 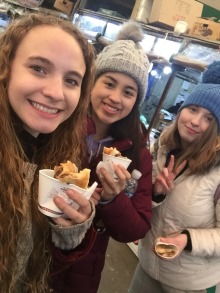 I came home from community service and relaxed for a bit—watching YouTube, writing blog posts, etc. Eventually, I even fell asleep and took a nap for a couple hours. My host mom and host sister had dinner during that time so when I woke up, I ate some 돈까스 that they brought back for me. And my night basically ended like that!

Lately, I’ve been coming home early on both Friday and Saturday night just because I don’t make all day plans. There’s nothing inherently wrong with this but sometimes 9 pm rolls around and I’m lying in my bed thinking “I could be out and about playing right now!” This could be because I’m bored or because my feelings of loneliness tend to skyrocket when I’m alone in my room at night. For the first time in a while, I made some plans for all day Saturday with some pretty cool people: Shannon, Josh, and Harmony.

Our day mostly revolved around seeing the movie Unbreakable from that director M. Night Shyamalan. The night before we had tried ordering the tickets online {to make sure we got seats next to each other because literally the theater we found was the ONLY theater in Seoul playing this movie and there was only one showtime!} but because of our lack of Korean credit cards or Korean bank accounts in general, this attempt failed. Instead, we planned to go to the movie theater several hours before the movie started and reserve our seats ourselves.

So Harmony, Shannon, and I met up at 충무로역 at around 1 pm and tried to find our way to the theater using Harmony’s map. Actually, the theater ended up being almost right next to the station but we passed it as we were too busy talking about the abundance of pet stores in the area rather than looking for our destination. We turned down some random street and ended up seeing the theater from the back. When we got to the theater we texted Josh to see if he still had plans to come and he was like the “moment of truth” which was so unclear. we were just standing in the theater being anxious and trying to figure out what to do with our boy Josh. He ended up telling us that yes he would come so we went up to the electronic self-checkout machine to order our tickets. We were determined to figure out how to buy the tickets without talking to any alive tellers—and we did! Plugging in our information and payment was a bit confusing but we managed. It honestly felt so good to have done it by ourselves {never changing the language to English}. It was definitely nothing besides a really simple accomplishment but in this household, we appreciate all.

After buying the movie tickets, Harmony, Shannon, and I went and had lunch at Popeyes which I had been craving for quite a while now. I really wanted their chicken tenders! Now, the Korean Popeyes does not have my favorite Cajun rice but the recipe for the biscuits was not that far off from the ones back in America; they were just a bit sweeter {but that is to be expected when it comes to bread in Korea.} 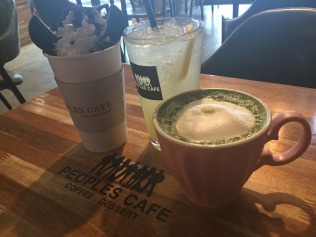 We hung out at this cafe called People’s Cafe {which also has a logo that resembles 나쁜여자 (bad woman) bar in 홍대 (Hongdae) which made us all laugh (Disclaimer: I have not been but it is an iconic landmark so it became an inside joke! Do not come for me Better World!) Besides the interesting choice of outside signage, the place was nice. Not too busy, WiFi was good, and the drinks were actually pretty cheap! Josh met up with us eventually and we went to see Unbreakable at the theater.

The movie itself was interesting and it kept me entertained for the duration of it because of its absurdity and the many surprises. Would I watch it again? No. Would I recommend it to anyone else? No. But the experience was one! We decided to sneak in snacks from the Emart right next to the theater like everyone does in America which was a great decision on our part! (Do Koreans do this too? Or were we really foreigners overstepping our boundaries?)

After the movie, Harmony left to go home for dinner while Josh, Shannon, and I decided to eat dinner out because, by the time we got home to our families, it would be passed dinner time anyway. We walked down this long sketchy alleyway of really traditional ma&pa Korean restaurants that really made me anxious. I guess it was just the dim lighting and the quiet empty atmosphere that really freaked me out. We ended up stumbling upon this 24 hour operated restaurant called 잊지마 식당 {Don’t Forget Restaurant is how you would directly translate it.} 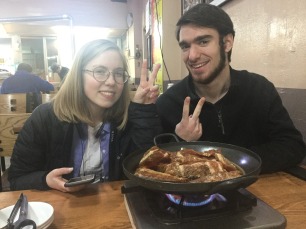 We ordered three portions of meat and 김치찌개 and ate all of it. However, although the food was very delicious, that was not what made this eating experience unforgettable… it was the lady serving us. In all honesty, I couldn’t really understand her Korean, but Josh had no trouble answering all her questions so he just went on with talking with her. After all our food came out, she prepared to show me how to make a lettuce wrap with the meat and the 반찬 with all our food. I was confused as to why she was doing this {mostly because we knew what to do} but it was a nice gesture by nature. Then, she took the lettuce wrap and fed it to me by putting it in my mouth for me. I was shook and had to try hard not to laugh or I would have choked on my lettuce wrap. She did the same thing to Shannon so I was not alone!

We had a nice dinner and then separated with Shannon. Josh and I spent another hour and a half at a cafe—I wrote a blog post while he worked on some scholarships. And that was all for my night! It was a lot of fun~ I feel like I haven’t gone out and done things outside of my comfort zone {getting movie tickets and eating at that type of restaurant} or out of routine {going somewhere that’s not Hongdae and hanging out with people other than Katie}. It was a nice change of pace!

That’s all for this blog post. I hope you enjoyed~