On Monday, I met up with Katie at Coffee Slob to get on that study grind before our monthly test. I spent the time switching back and forth between studying grammar and making example sentences to studying vocabulary with Quizlet. Although cafe study dates can more often than not turn into unproductive excuses to hang out with your friends, Katie and I are good at being able to have a good amount of time for chatting and goofing off but mainly being able to focus on our own studies (Or if we cannot focus, we do not pull the other one down with us… we just secretly go on Instagram or Tumblr!–in the case of Katie). 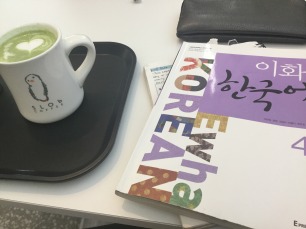 Class today was honestly… the worst it has been in a while. Lately, I feel like I have been doing quite well in Korean class–being able to keep up with the class just fine. But for some reason, today was not my day. We started off the class period with our teacher explaining what the new month was going to bring us in class. The new changes involved having to interview a family member for 30 minutes every week (and making a presentation out of that) and then also interviewing a host high school friend for like 5 minutes (and making a presentation out of that as well) in order to force us to use more Korean outside of school. 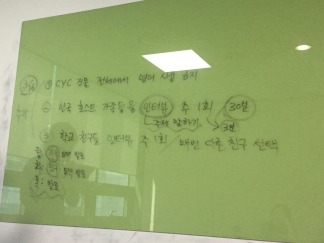 Another change that she said we would be implementing starting today would be no longer using English during break time. My Korean class has never used English during class as part of instruction by the teacher. Occasionally, someone might utter something to someone in English or we would say the English definition aloud to help someone else that was confused during our class but that was pretty much it. I am just making this point because the other classes did start off with English (and in some instances, quite a bit of it). They had to initiate No English rules and or make language pledges to only use Korean inside the classroom. Our teacher told us that the Better World staff felt that we were speaking too much English during the break and wanted us to try only speaking Korean during those 10 minutes two to three times a day.

This made me immediately upset and uncomfortable. I need the break time between the periods of Korean class to let off some steam and take a Korean language break. I need the time to just chill and collect myself before the next period. I need the time to have fun and relieve any stress or anxiety with my friends in the other class! I cannot do that speaking in Korean! I was not going to talk to the other students in Korean… and it was not just in the classroom during the break that we could not use English. We could not use English in the entire building! I was not having the new change so I ended up just not speaking during break and staying on my phone in a corner. 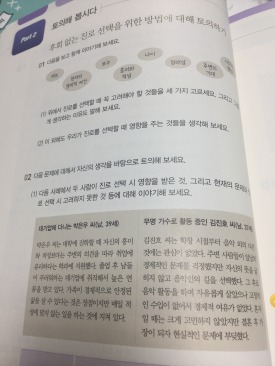 I am not sure if that set me up to feel unconfident for the rest of the class or not but when we resumed our second period of Korean class, I could not get one single sentence out. We started our discussion on what factors should be taken into consideration when choosing a career path. The first thing that I tried to explain was that thinking of how one can improve in their job and have more future prospects is important because you do not want to get bored with what you are doing. It started out smoothly and I used one of our new vocab words but I started trailing off at the end when trying to figure out how to finish my thought. I started getting teary-eyed as I realized I was making no sense and my teacher tried to move on. The room got quiet and all I could think about was Josh and Jacquelyn’s eyes on me. They were probably thinking about how embarrassing it must have been for me or they were probably wondering how I could be so bad at Korean for being in this class and in Korea for 6 months already. I tried my hand at saying two more of my opinions when the teacher called upon me to but both sentences ended halfway as I gave up trying to finish what I wanted to say. The teacher tried helping me out with my last one, trying to finish what I had to say, but she did not know what I wanted to say so I felt even worse having to tell her that I was not trying to get at what she had thought. Finally, after what felt like an eternity, it was break time. We technically could not use English but I needed to get some of my emotions out so I immediately left the classroom with tears brimming in my eyes. Josh stopped me out in the lounge area as I went to go hide in the stairwell and began to cry. Josh kept asking me why I was being like this today but I also did not know the answer to that. After getting some tears out of my system, I returned to the classroom and finished the last period of the day pretty much quiet as we went over new vocabulary.

Luckily, I was able to take my mind off of everything as I went home that day with June and Josh. We have all been living in 고양시 for the entire duration of winter break and yet this was the first time we were all taking the subway ride back home together. I have done the trip with both June and Josh individually several times. We just happened to never have the plans to go home right away at the same time before. It was really nice to do that today, though. It was fun having their company as our conversation was never dry.

For the rest of the night, I hardcore studied for the monthly test. I went over all the new grammar points from the chapters and made about three example sentences for each point. I did do a lot but I could have finished everything earlier than I did because I was too often being distracted by my phone mostly. I just could not sit still at the desk and study. I had to keep getting up and walking around and taking way too many breaks–none of which I honestly deserved. I do not know why I am like this lately! Why can I not stay motivated or concentrate!?

Well, that is all for this blog post…I am sorry it is kind of negative and depressing… that is just how it is sometimes… Till the next time I post~ Thanks for reading.