Today was technically the second day back at 하나고 for the new semester but it felt more like the first day as yesterday just consisted of the 입학식 (the entrance ceremony for first years) and getting things settled within our homerooms. Today was the first day that we would be following our schedules AKA going to new classes and having to make friends!

Today was also the first day of my new waking-up-at-five-thirty-in-the-morning-school-life. I woke up this morning and the entire house was dark; I had to pour my cereal using the light from the fridge to guide me because I was afraid of turning on a light and accidentally turning on all of the lights for the house as well (irrational fear? maybe…) I left my house before 6:30 am and jogged my way over to the subway station for my 50-minute commute. It was so early! However, a positive of waking up so early was that the train is not as crowded. I also have planned my train schedule to give me about ten minutes at my transfer station (one with good wifi and benches) so I have time halfway through my commute to communicate with Katie or any other friends. Also, already I am feeling grateful for this long commute in a weird not predicted way and that is because, with this extra time I am forced to commute, I have extra time to study vocabulary on Quizlet or write blog posts. I have only been doing this for three days (while writing this at least) and I have gotten a lot done! We love using our time wisely! 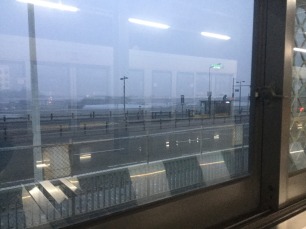 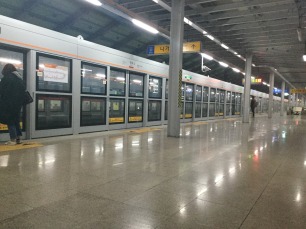 Arriving at school brought an expected wave of nerves as I realized that it was, in fact, our second day of school. Unlike my high school (that had block scheduling) and would only have 2 days with the “first day of school” feeling… our schedule was different for every single day of the week meaning we would be having 5 first days practically!

My first class today was my English Mentorship (or as it is called in Korean– 교환학생 함께하는 공간–free period with an exchange student); however, I ended up sitting in the discussion room in the library for the entire period by myself. The library teacher explained to me that since it is the beginning of the school year, the kids for the class have not been decided yet. So I believe that Katie and I can accept 자습 (self-study) time during all of our scheduled mentorship periods this week (We have more this semester! I believe three instead of two?)

My second class of the day was music with Katie!! One good thing and one bad thing in that sentence, can you guess which is which? I was so happy that 민정쌤 succeeded in getting us a class together even if it’s for a subject I know nothing about! Never took a music class in high school {well I guess… now I can say I have}.

When we first got to the music room, all the first-year students were waiting outside. When they saw us walking towards them, they started getting loud and obnoxious probably excited and or nervous to interact with us? When we got there they were all saying hi to us in English and then Katie pulled out the “Actually we can speak Korean.” card which caused almost everyone to visibly show surprise on their face and the boys got all loud and rowdy again. They asked us some questions like where we were from {When we said Chicago they kept screaming Simon. Turns out, that’s the English name of the vice-principal who attending graduate school at UChicago.} and our age {When I told them we were 21 Korean age, they all screamed again. I immediately followed up with the fact that they can use 반말 with us and call us 언니 and 누나 if they so please.

Once we piled in the classroom, Katie and I sat next to each other in the very back. Our music teacher seems really nice and was very enthusiastic about having us introduce our names {though she probably mispronounced Katie’s several times.} There was also this boy in the back that asked his friend to tell Katie that he wanted to be friends with her! It was the cutest and most freshman type thing I’ve ever seen. 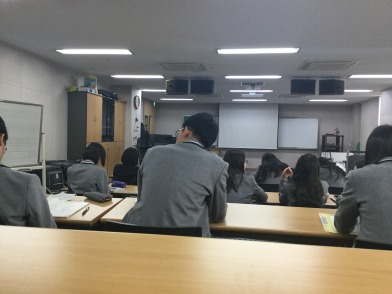 During class, we filled out this music pretest of sorts which I literally failed! I was able to guess some notes correctly but I knew none of the symbols for rests in music. She also played two pieces of music that we had to try and identify. There was nothing filled in for that section! Overall music class was chill. She explained the rules of the classroom, using the instruments, and practice room etiquette. At one point she warned the boys from doing any roughhousing near the ceiling speakers because they would break. She called them out; it was pretty funny.

After that class, I had 한국사 which was supposed to be with first-year students and on the fourth floor but when I arrived at the classroom, I was greeted by no one. I will say that I am pretty happy with how I handled the situation! Rather than freaking out, I went to the next class over and asked what class it was (in hopes that maybe the one written on my schedule was wrong). Unfortunately, they were still a first-year class and not the one I was looking for (영미문학 instead) and since this was only their second day of school, they had no good advice to give me. Actually, before answering my question, they exclaimed that my Korean was good and then asked if I was an exchange student. One of the girls just told me to wait in the room until someone showed up… I did for like 5 seconds and then I walked outside to find a teacher. One teacher passed by me and greeted me and I immediately ran up to him to explain my situation. It turned out that he was actually my teacher! And I was actually taking the class with third years instead so our classroom was on the 5th floor. I followed him up there and got to walk in after the teacher which was only a little bit embarrassing…

These two girls recognized me and called me over to sit with them which was relieving. I avoided having to panic over where I should sit for this class period at least. This teacher seemed really nice and actually acknowledged my existence which isn’t always the case for my teachers… He had me introduce myself to the class even though most of them probably know of me by now since I was with them last year. In class, we just went over the syllabus, teacher expectations, and then got started with a little bit of the class. I was able to follow along just slightly by being able to connect the dots with the random vocab words that I did understand. I think this class will be okay!

Finally, it was lunchtime and we were going to be able to eat with our friends for the first time in a while! We all met up at 12:20 pm {the time 2nd graders are allowed to start eating} but there was already such a huge line! The food we had today was so good! There was 자짱밥 (black bean rice), 해물만둣국 (seafood dumpling soup), and 탕수육 (sweet and sour pork). Unfortunately, Katie and I had to rush out of there to get to Korean class on time but nonetheless, catching up with our friends was fun. On our way out, we all ran into 규원, 주연, and 지은 {the girls from my mentorship class last year} and we talked to them on the hallway a bit! We promised to definitely have lunch together sometime next week! I miss them so much!! 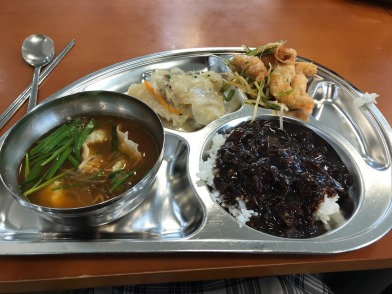 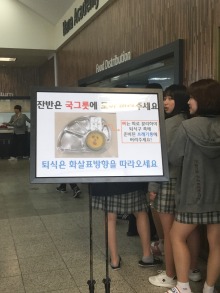 (Since the freshman students are still new to eating in the cafeteria, there are still signs up explaining how to dispose of bones and clean up your tray at the end of the period because the lines are still super long due to the first years not exactly knowing what to do.)

Korean class was… average. Nothing too exciting. I didn’t feel very good about my speaking or participation this day but I also didn’t want to cry during the breaks so that’s a plus? Actually, I did forget the word for river… I looked to Josh and tried to explain the word with “a thing bigger than a lake…” Yeah… so maybe yesterday was not my day?

After Korean class, I went straight home so I had an hour to kill before dinner. This precious hour was spent lying on the floor in my room so my priorities are quite clear if you ask me. My host mom went all out for dinner with a lovely assortment of 반찬 (side dishes), fish, 된장찌개 (soybean paste stew) as well as my favorite Korean dish ever: 잡채 (sweet potato glass noodles)! It was all very tasty.

I told them about me coming out in the school’s newspaper! {Did I mention that in yesterday’s blog post? We did an interview a while ago and we just got the paper!} Here’s a pic:

After dinner, I went hard at work and studied the new grammar point from today and I made a new Quizlet. I have a lot of work cut out for me tomorrow since I let myself go to bed at 11:30… but you know, you win some you lose some.

That’s all for this blog post! I know it’s another long one~~ I just feel the need to explain every last detail right now!! Besides probably not being able to finish this monster of a post… I hope you enjoyed anyways. Thanks for reading!