I had somewhat gone to bed early on Thursday night seeing that I had no Korean assignments due the following day so I was in a good mood when I woke up this Friday. It was also our first day back to school wearing 생활복 which always means an extra ten minutes of sleep! (Do not underestimate the amount of time a full uniform takes to put on…)

While I was making my normal commute, I looked out the window of the 대곡역 platform and got to watch a really beautiful sunrise. I realized that even though I am annoyed by this commute at times, I’m going to miss it dearly when it is not a part of my daily routine. 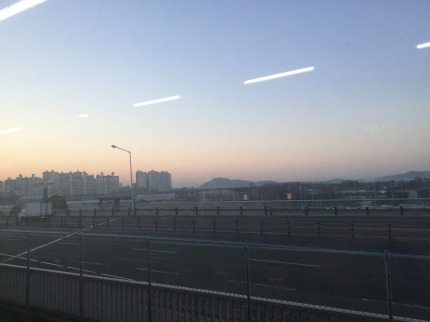 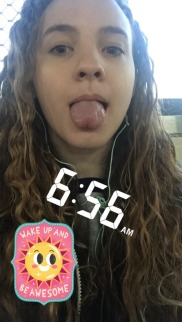 For first period, I had music class with Katie but we soon found out that we were not with the same class we met on Tuesday—but that we were in a different section. This meant that the kids were not the same bubbly group that knew we spoke Korean after interacting with us on the first day. Katie and I sat in between this group of girls and basically kept to ourselves.

During the second half of class, we began singing this famous Korean song called 아름다운 나라 which is honestly such a bop {but seriously it is a really beautiful song}. I can’t read sheet music so I had no idea how to sing the song, so I just followed what I thought everyone else was doing. I listened to the way they sang and followed closely behind. I got confused every time there was a repeat of a line but soon I realized how to read that symbol {music people must hate me for not knowing any of the names…} Katie and I both had a really fun time singing the song! {So much so that I purchased the song on iTunes so I can listen to it during my morning commute!} I feel like music class is going to be such a fun class—mostly because I’m able to take it with Katie~ 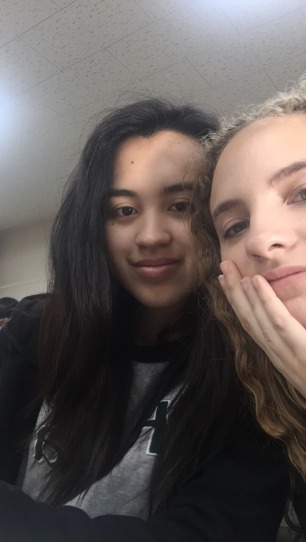 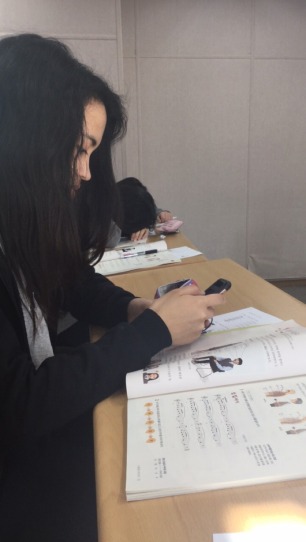 After music class, I had public speaking with 서린 which would be my first English class of the week and my first class taught by Jason! I walked into class and I sat down next to these two random girls because I couldn’t tell if 서린 had already dropped her bag off or not yet. When she came in to see me sitting by them, she was offended at first. It was pretty funny.

The girls I sat next to were named 수빈 and 민지. When I first sat down, 민지 told me that she hadn’t gotten the chance to take a class with me yet so she was super excited that she finally was able to. 수빈 also asked me what my age was and mumbled under her breath that “Isn’t Korean age different?” In which I replied “Yes.” She was spooked for a quick bit—forgetting that I did speak Korean in front of her just before then.

Jason came in and began class with this annoying Metronome ticking and making fun of these two guys in the class. He pointed at them and said that they were allowed to sit wherever they want but if they choose to, they may not see their English skills improve. After he said this, one of the boys turned to the other {in Korean} and asked “Did you understand that?” And the other replied with, “No.” which made the entire class laugh.

It also may have just been the first day of class, but we were starting off right away with presentations. The topic was “Something that is important to you.” I decided to do mine on memories. 서린, being the lovely person that she is (note the sarcasm), tells Jason that I did speech team in high school?? Thanks for raising his expectations 서린아!!!

Everyone presented for around 2 minutes about something that was important to them. I realized that a really common term for the presentations was anything revolving time at 하나고, which makes sense… this is their life. But it made me wonder if I would have answered similarly if I had done this topic in my communications class {basically my school’s version of public speaking} during sophomore year. I’m not sure, but I don’t think I would even have mentioned my school’s name. There were quite a few kids that were really good at English which always impressed me beyond no end. 서린, for one, had a really great speech about having confidence to go out of her comfort zone when learning English. She hadn’t lived abroad, traveled intensely in an English speaking country, or gone to an English kindergarten/academy when young, but she was never afraid to speak to foreigners and that is how she improved. Honestly, she’s inspiring. 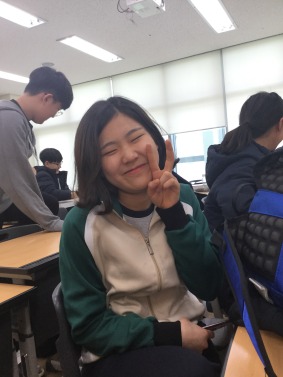 One of the kids in the class (기준 is his name if I am correct; he was also in Bisera–economics club–with me last semester) gave a speech on roommates and talked about his last semester roommate who was on the wrestling team and would use him as a punching bag every single day. At this, 서린 turned to me and said that his roommate really did look like a thumb. I was shook because I feel like I would have noticed a walking thumb around the school hallways? But maybe the school uniforms can hide a person’s thumbness? 기준’s speech was exceptionally funny and I couldn’t stop laughing. Jason pointed out at the end that he definitely would have gotten first place and me second but I was not offended! I was never a good speech-giver anyways.

Eventually, it was finally lunch time and I was ready to eat! The spread today was good as it included chicken and strawberries! Real, raw fruit at lunch? Wow, what a concept! Lunch was fun as we discussed where we wanted to go for the school trip {we decided to vote for 제주도} and then we talked more about the differences between our school systems—like AP classes! I tried to bring up the disparity among different schools in America explaining that private schools usually only have higher class people and are often religiously affiliated. I also brought up Chicago public schools and how the poor students who attend them often don’t have the same resources as other schools. This conversation was brought up when the girls asked Katie and me what AP classes we took and I explained that every school has different classes. 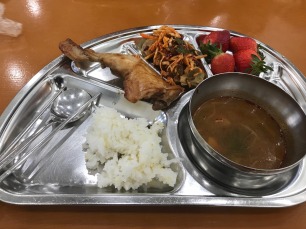 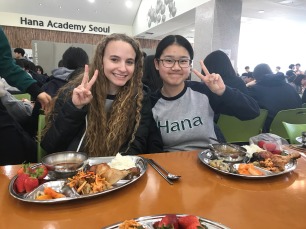 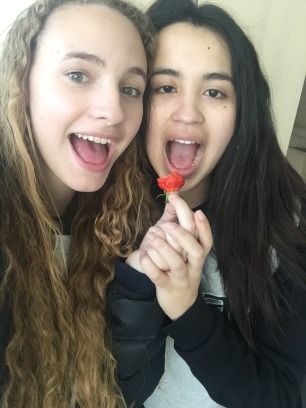 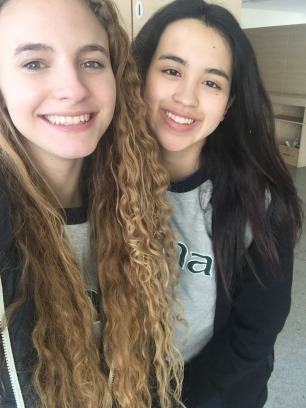 After lunch, Katie and I hung around the halls to find our lockers because we actually have some this year! And, they actually had our names on them too {On  sticky note paper rather than fancy printed name tags like the other students but I’ll take what I can get!} We had our free period in the library at this time so we just chilled in the study room and did work. I’m pretty sure I spent the whole time editing a blog post and saving photos onto my computer to use for said blog post.

The last period of the week for me was 미시경제학 (Microeconomics) with 서린 and the same teacher that I had last semester. When she walked in and saw me, she greeted me and welcomed me back. She also asked 서린 if she would be able to help me during class which made me feel bad… like a burden to 서린. I hope she doesn’t start regretting having so many classes with me…

Our teacher started the class off with talk about what we were going to do for the semester before handing out a sheet of paper to all of us that included a brain map and questions to fill in. 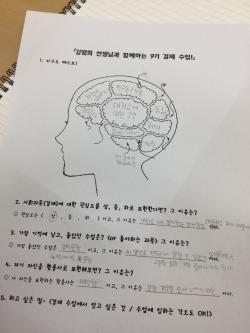 At the end of the class period, we started playing this economics game that showcased how supply and demand and luck plays an influence in farming. This was a game I would expect in an American class too except the food we grew emphasized the fact that we were in Korea. The vegetables chosen were 배추 (lettuce), 무 (radish), and 고구마 (sweet potato). In American classrooms, we definitely would have used corn. At least, in my class back in the Midwest. 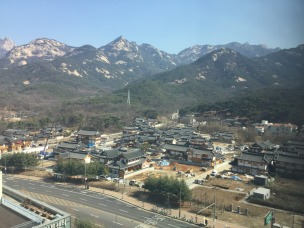 View from the school!!~

After school, Katie and I yeeted out of the school after speaking with some of our friends for a bit because we were planning to go back to our favorite cafe to study. Shada was coming too so that Katie could help her with SAT math problems. It had probably been almost half a month since the last time we were there, so it was nice having the owner remember and acknowledge us and how long it’s been.

I was feeling some sort of random wave of confidence when I went up to order so I told her that I wanted to try out a new drink as she knows I always just get a hot green tea latte. I asked her what was good on the menu and she helped me narrow it down to a fruit smoothie of some kind, I went with strawberry. Also, while we were hard at work, she brought us a little tray of free nuts which was really nice of her~ Free snacks!! I wish I could only come here more often… now that I don’t live at this station, there’s really no reason for Katie and me to meet there when we can just go to each other’s stations. 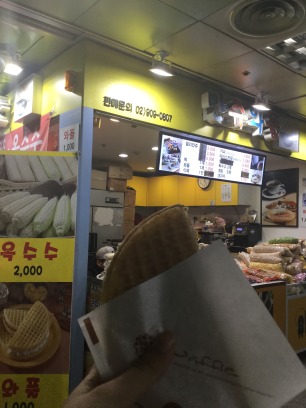 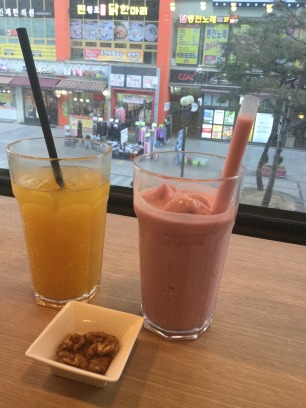 I left the cafe after an hour and a half or so and went back home to have dinner with my host family. We ended up going out to eat at a well-known place called 남도복국 out in 파주시 right near where June used to live! It was a place that was open 24 hours and my host sisters told me that it got really popular because taxi drivers would eat there and the food they served was built for the taste palettes of 아주씨s (Older Korean men) if you will. However, the food they served here was also just good in general {to the general public} so it became known as a 맛집 (highly delicious restaurant!)

We ended up eating 콩나물국밥 (Bean Sprout Rice Porridge) with a side order of 생선과 감자 튀김 (fish and fried potato) which was all very very delicious. While we were there, they asked me if there were any 24 hour places in America besides fast food chains. This led me to describe diners and the cozy, homey feel they have. I also tried my best to explain comfort food… This talk made me really miss the local diner by me that served the best chocolate chip pancakes. The first thing I get home {when I’m still getting over being jet lagged} is go to that dinner at 2 am and order the biggest stack of these pancakes! 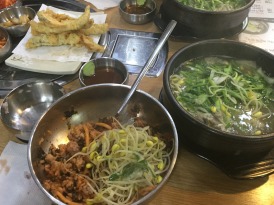 I spent the rest of the night just chilling in my room watching this Korean Web Series. You could kind of call that productive? Well that’s all for this blog post! Till next time~