Today was a really fun day. Thinking back on it now (about two weeks later), I can’t help but smile—especially looking at all the pictures I took from this day. I was genuinely happy during so many moments throughout the day. I can’t help but feel thankful for days like today.

The Japanese exchange students arrived at 하나고 yesterday so everyone was still buzzing about the new students. There were about 12 students maybe? Half boys and half girls—representing about 6 schools or so among the students. In my homeroom, we watched a video introduction of them and Japanese culture which was really well edited. Though I will admit… it made me kinda sad to see how much effort the students at 하나고 put into it and how much they prepared for the Japanese students while Katie and I were left to our own devices to either sink or swim when we first arrived here.

One of the Japanese students in my public speaking class gave me this delicious Japanese chocolate! Best thing I have ever eaten, perhaps?!?!

Music class was the first period of the day and after we got through all the boring things about music theory, we got to sing ‘What I’ve Been Looking For’ from Disney’s High School Musical!! Honestly, I didn’t watch high school musical till the year prior when my friend group let me know that I could not finish my high school career without seeing the movie. The fact that it was an American song and something somewhat familiar made my heart skip a beat. 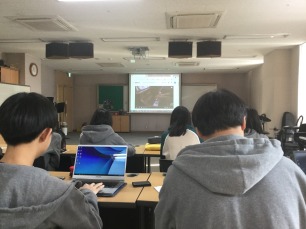 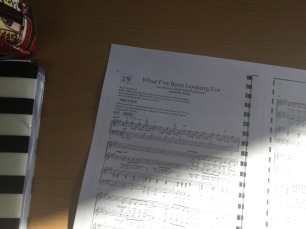 For once, Katie and I felt like we knew something better than the Korean students which was nice. Singing the song was so much fun and my smile never left my face during the duration of the song. Even during break, we went into a practice room with some of the other girls in the class and practiced the song (along with random things like Justin Bieber.) It was the best music class yet. 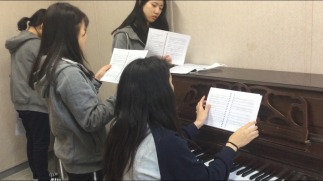 Public speaking was my next class and we spent the entire class doing tongue twisters. It was truly a lot of fun. I think I have come to realize a hidden talent of mine: how fast I can say the Peter Picks a Peck of Pickled Peppers tongue twister!

During lunch, I had to do a 상담 with my homeroom teacher so we ended up taking a short little walk to the Twosome Place Cafe near school and sitting down together to chat (while also enjoying some drinks and a cheesecake). We ended up talking about a lot of subjects: life at 하나고, making friends, 마니또, Korean class, plans with Katie, our upcoming 반모임, the templestay I will be doing this weekend! We spoke in all Korean and it was nice having time to say more to my teacher than the hurried ‘good morning’ when she is either rushing to start homeroom class or rushing to end it.

Also the main female employee at the cafe was there and when she met my home room teacher, she kept complimenting my Korean and telling her that I come here often and that she’s always shocked by what I say. She also guessed my order before I said anything (My order being a green tea latte or a strawberry & peach frappuccino) which shows how observant she is! But also… that she likes me enough to remember my order!^^ 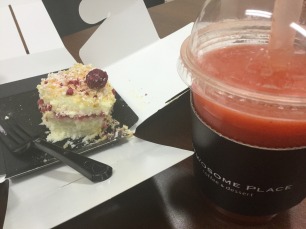 We got back to the lunch room 10 minutes before the end of the lunch period so I ended up not being able to eat lunch… so my lunch ended up being the rest of the cheesecake that we did not finish at the cafe. It wasn’t a big deal though— I wasn’t complaining. It was my favorite flavor: raspberry cheesecake.

After lunch I had a free study period with Katie (which is where I ate my cake!) and then it was Economics. Before our teacher came in, we (the other students and I) decorated the board with lots of pictures basically begging our teacher to allow us to go outside for class today: something known as 야외 수업. When she came into the classroom and saw all that we did, she was adamantly against letting us go outside. After a first period of actually working hard, we were able to convince her to let us roam free for the last period of the day.

That day, I hung out with the girls in my Economics class and the girls from the class next door (people like 소연, 서영, 예원, and of course 서린 and her Japanese exchange student friend Kana. We played some Korean games like I am grounded (I finally know how to play although I really suck at it!) as well as this flower blooming game that is very similar to the American game called Red Light Green Light. At one point, one of the math teachers came and joined us in playing the game too! (The math teacher that all the girls shriek over when he passes them in the hallway… Everyone thinks he is so attractive. The image of squealing high school girls live on here at 하나고.) 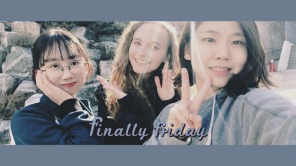 We took lots of selfies and just enjoyed the really nice weather. (We didn’t realize that it was actually going to get really cold that weekend and the week to follow…)

What do you call these poses? Just a bit concerned 😛

After school that day, Katie and I went back to my home station of 탄현역 to go to a cafe near my apartment. We studied for an hour or so there (Trying to get some work done since we knew we would be hanging out and having fun tonight—and there would be no work time at the temple—so we needed to be productive… though that was easier said than done.)

For dinner, my host family, Ellen, and Katie and I went to the Chinese restaurant that was the first place I ate out with my host family: 도깨비 탕수육 (Goblin Sweet & Sour Pork) out in 파주시 (Paju-Shi). We had some delicious 탕수육 and 짬뽕. Dinner was a lot of fun! Katie and I were able to talk to my host sisters and Ellen about our days and life in general and since we are so close in age, it was fun feeling like we were actually friends! We talked about Katie’s current boy issues and just life lessons. 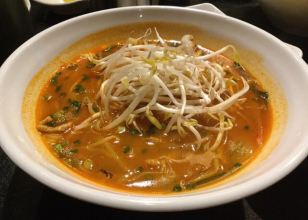 After dinner, we also went to this really pretty cafe that looked like a regal furniture store that also sold handmade accessories like jewelry and purses! And it did sell all of those things… but the main purpose was a cafe! I got this really huge and yummy strawberry smoothie (it was also really expensive) and we all shared a massive plate of waffles and ice cream. Sitting all together and chatting was exactly how I wanted to spend this Friday night~~ It was such a special day. I will always remember this! 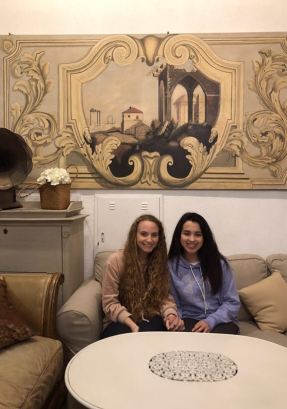 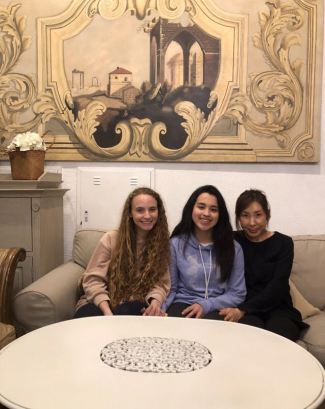 (I will also put Katie on blast and expose her for breaking the handle of the bathroom door. She went to turn the knob… and it just fell straight off!) 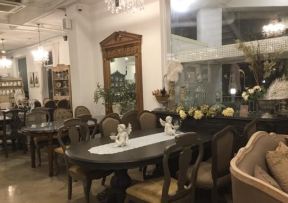 We got home from the cafe and went on a little walk around my apartment complex. We bought some kinder eggs at the convenience store and ate those, built the little action figures, and talked for more than an hour–luckily it was not that cold this evening.

While we were sitting under the gazebo, we dished out everything that had been happening recently: ranting, complaining, and simply updating. While we were sitting there, a man walked by with this medium-sized pig on a leash. I stared at it for a second and blinked a couple times before I started silently shrieking and pointing at the animal. I was so shook! I had known there was a pig living in our apartment complex (because I had seen pictures taken by my host mom) but I was still not ready to see it! Here, big dog breeds are pretty rare so to see a pig… my jaw dropped to the floor.

Katie ended up sleeping over at my house because her host family would be going on a trip during the weekend and she could not go because of our required templestay programming so we were able to convince Better World to let her stay with me! For a sleepover! Katie finally got the taste of spending a night in a real bed which she hadn’t experienced for an entire 6 months. (She was also quite thankful because my bed is super comfy! I ended up sleeping on the floor, but it was also really comfortable.)

We didn’t stay up too late talking or anything of that sort. We knew we needed to sleep because of the 3 am wake up call on Sunday (as per templestay routine) so we were good and went to bed by midnight.

That’s all for this blog post! I hope you enjoyed~ I have not uploaded a blog post in so long… it has to be almost half a year now huh? It was not my intention, but I ran out of storage space. It was not until now that I was able to upgrade my WordPress site. Now I have my own domain!! Isn’t it so snazzy??? Till next time (and it will be sooner rather than later)