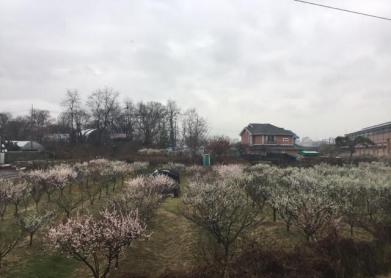 Views from my transfer station 대곡역 which is mostly outside. It makes me truly feel like I am outside of Seoul since its surroundings look pretty rural. But look, some flowers started blooming~ Although the morning is still very chilly. I have a love-hate relationship with this station; however, the scenery is nice.

When I woke up Wednesday morning, I knew I had come down with something and it wasn’t just a cold. My throat ached badly and when I opened my mouth to cough, the sheer raspiness in my voice surprised me. I could still breath out of my nose perfectly fine but my head also throbbed. I placed my hand against my forehead and could feel unusual warmth. I decided to just carry on with the day regardless (I do not get sick often and have not skipped school for sickness in a long time so my initial game plan was to ignore it.) and threw on my 생활복 and didn’t even do my hair or put on any makeup (something that’s pretty rare now—though in high school, I never wore makeup.)

Wednesday’s day of school was literally a blur. Maybe because I was sick? But trying to look back on this day… I come up with nothing. However, I guess it could have also just been an uneventful school day. I had 국어 in the morning which I basically just day dreamed throughout the entire thing because I wasn’t feeling well. At one point, the teacher was explaining some concept involving fire and paper so he came to my desk (I was sitting in the back) and took my paper and tried throwing it up in the air. While demonstrating, he dropped his marker and paper on the floor so it ended up being kind of awkward—especially because I still had no idea what he was trying to show me. I had to muffle my nervous laughter.

Another time, he asked me what 벚꽃 (cherry blossoms) were in English and after I told him, he proceeds to point out the flower on our paper but he realized that I was “looking”at the wrong side of the paper so he flipped the side for me. That was a bit embarrassing to be honest…

During my study period with Katie… I literally stole her coat and then slept for almost the entire period. It was pretty nice.

During my two hours of 세계사, I worked on my Korean workbook pages and then did a Topik reading test.

We ate lunch with our friends but I was not really impressed by the meal. Mostly because the rice contained corn kernels and I could barely eat around it so I gave up eating it halfway through lunch. (I hate corn more than any other food in this world…) I was also really sick at this point in the day so I barely said a word during lunch. I just brought spoonfuls up to my mouth and chewed. Katie was also very tired so she didn’t say much either. 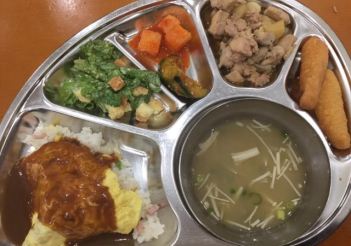 We had Japanese Omurice (오모라이스) which is just an empty omelette draped over rice usually accompanied by a savory/sweet sauce.

My last class of the day was politics and we just listened to lectures for the two hours, so I worked on my Topik writing test which left me finished with my last Topik test! (Actually this is a lie; we will probably get one more before the date of the actual test.)

After school today we had our second club meeting; however, since midterms are coming up, we ended up self-studying during the period—or at least for the greater part of the hour. At first we goofed off about the club hoodies that we are making and the ugly logo of the club but after awhile, everyone was able to settle down in their own desk and do some work. I made a Quizlet for the newest chapter for Korean class!

After school, even though I felt like death, I decided to go to Twosome Place with Katie because I worried that if I went home, I would just sleep and not do any actual work. I wanted to prevent this or at least lessen the consequences by doing most of my work before I got home. 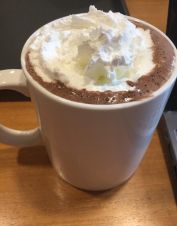 And I was successful, despite the random dance breaks to Taylor Swift’s Love Story and Let it Go, I was able to write my entire presentation on a Korean historical figure: I choose the Korean independence movement leader 유관순 열사. Also Katie told the employees at the cafe that I hurt my foot (which is why she ordered a hot chocolate for me) and so when we left the cafe after our study date, she asked me how I hurt my foot. I explained to her that I wore new shoes (left out the part about the fact that they were heels) and walked around for hours so I hurt my feet. She laughed and said “Oh I assumed you hurt it badly.” We laughed and left but if only she could see my toe! It is no tiny blister! No, it is not!

(I don’t think I wrote about it earlier but one of my blisters—from wearing uncomfortable heels while walking for hours on Sunday—on my foot popped and the skin ripped off so I have an area on my pinky toe (makes it ten times worse) about the size of a quarter that’s all red and raw as my first layer of skin literally peeled up. It hurts a lot and even if I put band-aids on it, it hurts really badly–especially, when I wear my sneakers and walk around so I currently have a limp while I walk. I also have been using it as an excuse to use the elevator in the school more often cause stairs… are not my favorite right now.)

Anyway, I came home after studying at the cafe and had dinner with my host sisters. We ate at home but we had this huge feast made up of grilled meats, two different kinds of noodles and a pot of steamed egg. During dinner today, we had an interesting conversation about age difference in Korea. In America, we have a common phrase that “Age is but a number” but in Korea, it is so much more than that so I was curious to know  how it relates to relationships. From what my host sisters told me, too big of age gaps are not common but they really aren’t a big deal as long as the two people are close enough in age that they are a part of the same “generation” if you will. When it comes to friendships, it’s a bit different because if there’s a very large age gap, sometimes it can feel like you aren’t true friends but simply a person that’s just older than you (like an 언니 or 오빠). She did tell me that there’s a very negative image towards guys in their late 20s dating girls in their early twenties/in college.

My older host sister explained that this is seen as really sleazy to most people and they actually view the guy as a bad person. (Example, if a 26 year old was dating a 21 year old in college.) They also said that he would probably take advantage of her because she doesn’t know better but more importantly, it’s a real red flag if he can’t find anyone in his own circle of acquaintances and has to resort to shooting his shot in a bigger pool with younger girls. They did mention that this the other way around (a way older woman with a younger guy) has no negative connotations.

She also made sure to tell me that I need to be careful with Korean men especially because I’m a foreigner—she said no one too old!! And if I find someone, especially someone that old, she will have to have dinner with him and make sure that his intentions are pure. It was really cute~ At that moment, I felt what is what I assume it feels like to have an older sister~

That is all for this blog post~ I hope you enjoyed! I am on the grind writing out these blog posts so quickly this week. I am really trying to catch up (only 5 days behind now!) Let’s get this! Thanks for reading, anyway! Insert your email to the right of this post to follow for more!