School today was just eh… I did not really have class today… it was mostly just 자습 the whole time which isn’t necessarily a bad thing. I got so much Korean studying done! I reviewed all of my recently learned grammar—and three points we have not officially learned yet—and did my workbook pages. I guess days with too much self-study make me lonely since it limits my interactions with the other students because they are also studying as well. Especially in politics class after lunch, I have three good friends in that class so you would expect it to be alright but I felt the most 답답하다 (suffocated/frustrated) in that class for some reason… 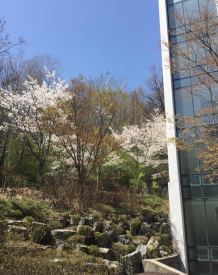 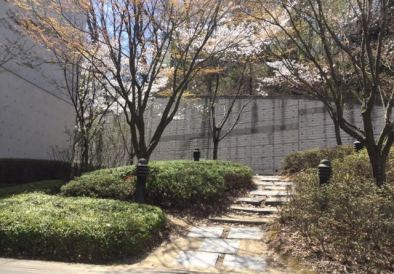 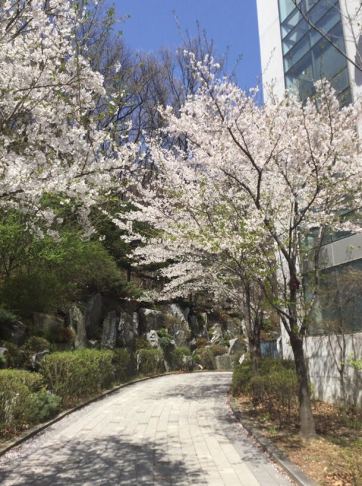 Honestly, my school is so pretty ❤ No matter what season!~ But especially in spring~

But besides actual classes, break times were fun and lunch was really nice! We planned to meet up with our friends to eat lunch at our usual time (12:40 pm) so until that time rolled around, Katie and I walked around the school and explored the grounds. We went on the search for the cherry blossom trees on campus! We found them! The weather was incredibly nice out so we just enjoyed the breeze and chatted before lunch time. 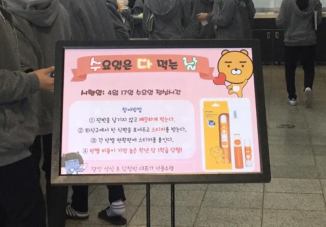 Today was another 수다날 otherwise known as 수요일 다 먹는 날 which means that if you eat all of the food on your tray, you get a sticker and usually a prize or a chance to win a prize. Today’s gift was only receivable if your individual home room won by having the most stickers and the prize was highly coveted seeing that they were Ryan (the Kakao character) themed electric tooth brushes! Particularly, this is an amazing gift for high school students because it’s really cute, follows a trend, and if you know anything about Korean high schools, the students always brush their teeth at school—in the morning, after lunch, etc. 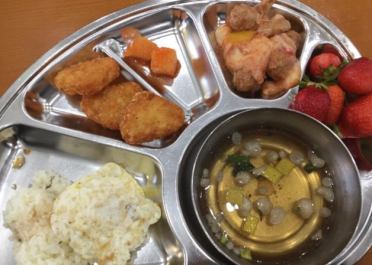 I could NOT finish the meal because they were serving these weird cheesy meatballs and I could not get myself to stomach it. I instead ate everything else as the soup, hash browns, and rice with an egg were all very very good. I decided to take one for the team and sacrifice my tray for everyone else that still had stuff on their plates so that they could get the sticker for their respective homerooms. 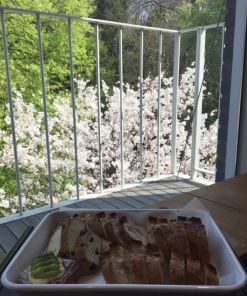 Once the school day was over, Katie and I changed it up with our cafe choice and headed over to 북한산 제빵소 (Bukhansan Atelier is the English name) and tried to be somewhat productive while consuming large amounts of bread that should not have been humanly possible. (I am not kidding, we split a huge baguette type thing! It was so good though… no regrets!)

The weather was still so nice and it was my first time being back at the cafe when it wasn’t winter and we realized that the bakery has a lot of outdoor space. While walking up to the building, we noticed that the entire front side of the cafe is lined with tables. Once inside, there are open spaces that you can walk through to get to small courtyard-like space with more seating! There’s even space on the third floor to sit outside! 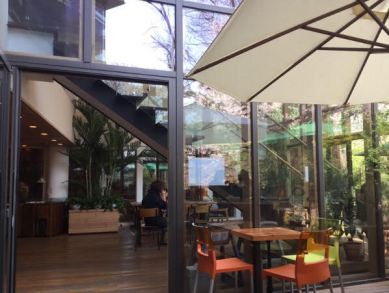 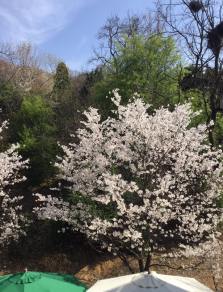 We ended up sitting inside but only because we desperately needed the WiFi to do work otherwise our butts would have been on some chairs outside. We will have to come back with the only goal of relaxing. Though, at that time, there won’t be any cherry blossoms… 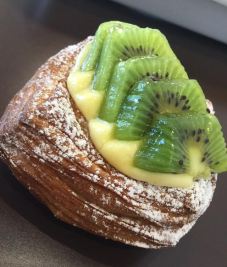 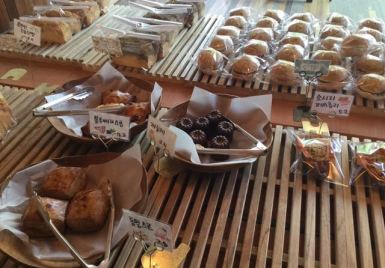 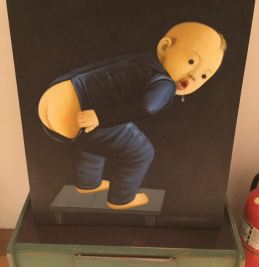 Enjoy this lovely painting that was in the bathroom of the bakery/cafe. I had a laugh.

After staying at the cafe for about two hours, Katie and I embarked on an endeavor to find the waterfall nearby. There’s a bus stop called 폭포동 (Waterfall Neighborhood) and I’ve seen the waterfall before, so we decided that today would be the day we would get off at that station and explore! 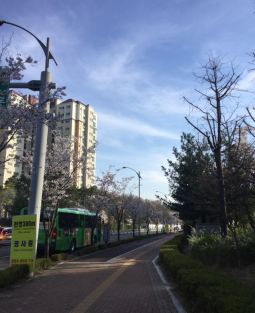 Views while waiting for the bus~

Turns out, the waterfall is fully man-made and although I expected that (you would too if you saw it… it is really oddly placed and we are smack dab in the middle of the city. ), it was still interesting to see. 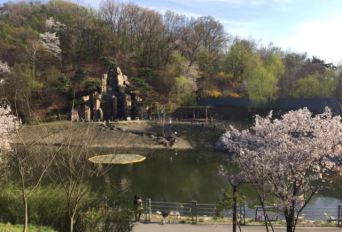 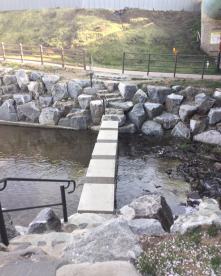 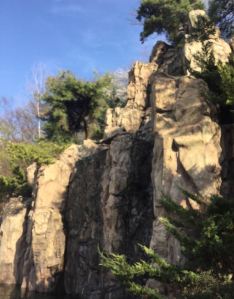 Another disappointing factor though, was that water only came out of the waterfall twice a day for only one hour each time. One of the times was at night but the first time was from the span of noon to 1 pm. That must have been the time when I’ve seen this waterfall previously because I do have recollection of it having water flowing. I must have seen it on our way to Korean class. Katie and I decided that on a day that we leave 하나고 to have lunch (but don’t have a reason to—like we don’t have to be in 홍대 for class or anything), we will come to the waterfall for a quick sight before going off to get 분식 at the market. 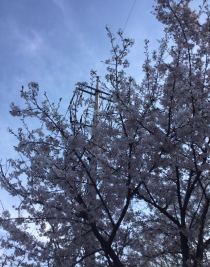 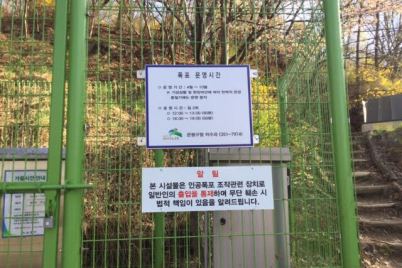 We got back on the bus to return to the subway station and I only had 400원 on my card so the machine beeped at me. We got off the bus and hadn’t been walking around for more than 30 minutes so we assumed we wouldn’t get charged more for getting on at a different stop on the same line. I ended up just throwing money in the collection bin. However, when I got on the subway to head back home on the 3rd line (after refilling my card), it charged me as a transfer and not as a new trip so I’m not sure what my card was doing—though I was happy about the situation cause I didn’t have to pay more money!

I arrived to the apartment and no one was home when I first arrived. I closed the door to my room and change into comfier clothes while my host mom returned with Andy. She assumed no one was home but Andy was going crazy in front of the door. She opened the door about to say that no one was there and then she was shocked to see me! Andy knew that I was home! Him and his strong little nose~

My host mom later told me that he was going crazy before they even got in the elevator! I don’t know why but the thought of Andy getting all hyper and happy thinking about me being home made me very touched~~ I’m going to really miss this dog! 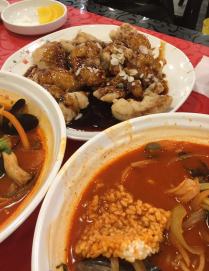 For dinner, we went out and tried this new restaurant in the shopping center near our apartment that serves 짬뽕 (Spicy Seafood Noodles) and 탕수육 (Fried Pork). Usually when we want to eat Koreanized Chinese food, we go to 도깨비 (Goblin) in 파주 but this place was a lot better. The noodles were chewier and the broth of the soup was addicting. Plus, the 탕수육 had more of the snack-like crunch that both me and my host sister really enjoyed. Now that we have this place, we may not return to the other one. Thinking about that… is kinda bittersweet, though.

I spent the rest of the night procrastinating on my Korean homework and my presentation. That night I wrote one on jobs that will mostly likely disappear due to the development of technology! (Robots anyone?) I stayed up till after midnight writing the script because I kept getting distracted… on the bright side, it ended up being one of the presentations I’m the most proud of! I included lots of vocabulary learned in class recently and my grammar points were pretty advanced…if I do say so myself.

That’s all for the blog post~ Although the school day was overall quite underwhelming, I really had a great day today. Made a lot of discoveries, felt closer to both my school community and my host family, and ate some pretty delicious food~ It was a good day indeed. Well, I hope you enjoyed! Do not forget to subscribe to my blog for more posts like this one!