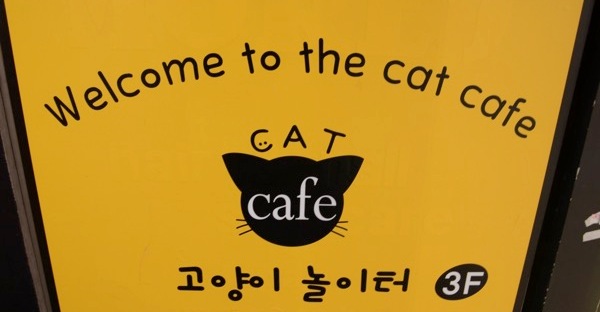 On Wednesday (July 27th, 2016) I went with a bunch of my classmates to this restaurant close to the university for some lunch. It was a big group made up of Sofia, Tucker, Nicole, Casey, Jodi and I. It was a very traditional restaurant that served us plenty of side dishes and the menu was only in Korean — no English translations whatsoever. I had ordered a dish of cold water noodles (물냉면) since I had it the night before with my host mom for dinner and it was very very delicious. My host mom finished up work a little before 8pm so she called me on my Korean flip phone telling me to walk outside of the apartment complex and find her car and then we would go out to dinner near the house. We went to this  restaurant and I ordered the cold water noodles while she ordered spicy cold noodles (비빔 냉면). I loved it so much the night before, I ordered it again! 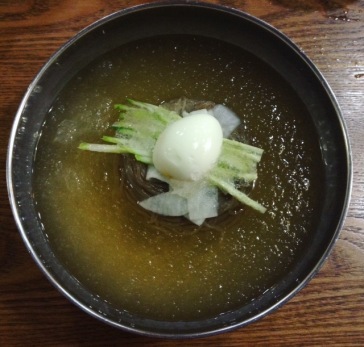 Cold Water Noodles (mul-naengmyeon — 물냉면) are predominantly buckwheat noodles that are very thin and chewy. The broth of the noodles is cold and icy. It vaguely resembles slushy snow water if that makes any sense. The broth is very tangy and a bit savory. It is mostly eaten in Korea during the summer since it is a perfect dish to eat during a hot day. It is one of the dishes I know I will miss the most when I come back home from Korea.

After eating lunch, Sofia and I headed off to Myeongdong (명동) to go to a cat cafe. We had already been to a dog cafe but Sofia and I also really like cats as well, so we wanted to experience a cat cafe. We didn’t really have any specific one in mind or one that we researched. We just knew that myungdong had one since whenever we went there in the past, there was always a guy in a cat suit walking around holding a sign. We decided to just find him and ask him where we should go. We eventually found the guy walking around and I asked him in Korean “Left or Right?” but he just motioned towards us with his hands to follow him and he brought us to the building where the cafe was in. He told us to press level 3 on the elevator and then left us from there. 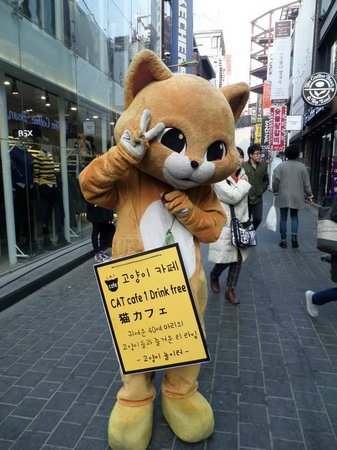 Dude in the Cat Suit

When we arrived to the right floor we were in a small lobby type thing outside of the doors to get inside of the cafe. We took our shoes off and put them in this little shoe cubby and switched out footwear for indoor slippers. The girls had pink ones while the guys slippers were blue. When we got inside, we went to the counter to pay for admission that came with one free drink. (They advertise admission with one free drink but basically the admission is the drink.) The admission was $8 and both of us ordered green tea lattes.

He showed us this laminated paper with all the rules of the cafe in English while he explained the rules to us in Korean rather than English. (which was really great since he had really good English skills. It was nice that he was helping us with our Korean listening skills.) The rules were pretty obvious but one rule that was pretty important is if a cat was wearing a blue scarf around its neck, don’t play with it or bother it. Most of the cats were wearing random colored scarves but some weren’t wearing any at all. The scarves/neck pieces (I can not explain it well enough) were super cute.

We sat at the back of the store and got a pretty big table to ourselves. We were able to see the whole cafe from our view point. We spent the first hour at the cafe in our seats enjoying our drinks and petting cats. I honestly prefer cats over dogs so this was heaven to me. 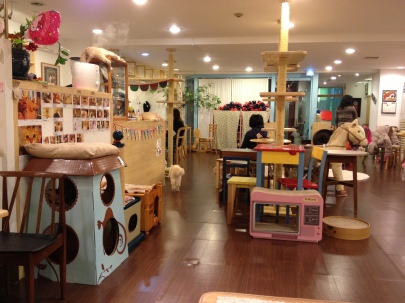 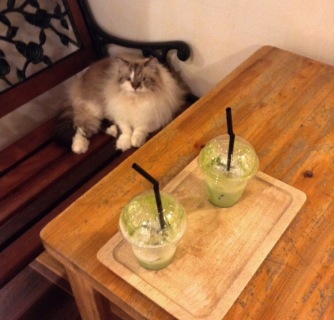 The cat sat next to me on the bench basically the whole time we were there.

Sofia and a Cat!

I honestly prefer Korean cat cafes over Korean dog cafes and not just because I like cats better to begin with. Cat cafes are so much more relaxed and calm. There is no barking or screaming or any loud noises at all. The cats are also a lot easier to pet. The dogs (at least at the cafe I went to) were so hyper that they wouldn’t stay still for you to pet them. The only ones you could really pet were the ones that were sleeping. Plus, it smelled really bad at times since they would just take bathroom breaks in the middle of the floor. In the cat cafe, the cats would go through these little cat doors to a separate room in case they were not feeling human interaction and I am guessing their litter boxes were back there also since it didn’t smell bad in the actual cafe. To play with dogs you need toys and or treats or they aren’t into you. Cats are fine with just sitting on your lap and being petted. At the cat cafe, I was able to sit at a table with Sofia and do our Korean Homework while petting my favorite cat right next to me.

After the cat cafe, Sofia and I took the subway to Edae because later that afternoon we were going to meet up with one of my friends on HelloTalk that I have been talking to for awhile now. I help him practice English. HelloTalk is this app that is a community of language learners and by joining the app, you can talk to people that are native in the language you are wanting to learn while they want to learn the language you are native in. It is actually pretty great since not only do you message back and forth, but you can also correct their sentences and translate certain parts if you can’t understand it.

But first, Sofia and I walked around some of the streets surrounding Ewha womans University. We went into Artbox and even discovered that the location we were at had another level (and we have been there several times already). Right next to Artbox there was a set of stairs leading to the other levels of the building. We went up the stairs and found a cafe on the second level called “백설공주 The World Dessert Cafe.” 백설공주 means Snow White so the Cafe is named after the princess I presume. Visiting the cafe was pretty much an impulse decision but I am glad we both did since we both really liked it and there were so many things that we could order from the cafe that seemed so delicious.

Sofia and I split an Oreo Bingsu (오레오 빙수) which was delicious! It was my first time having that flavor in Korea and it was really good. They had a lot of other things to order as well. Different flavors of bingsu, toasts, ice cream, and lots of different types of drinks.

After our bingsu it was around 5pm which was the time we were meeting up with my HelloTalk friend at the exit closest to the cafe. When we met up with him at first, it was really awkward as messaging is a lot different than real life conversation. But eventually we got over the awkward silence and soon enough Sofia was feeling chill with him too. He wanted to go get dinner but Sofia and I didn’t plan this meeting very well as we did just finish eating Bingsu. My HelloTalk friend wasn’t so familiar with the Edae area so we walked around for awhile until he finally picked a place that was appetizing to him. Sofia and I ended up sharing a dinner since we were definitely not hungry enough to eat something by ourselves. We shared a plate of mild donkatsu. Even though we both shared, we still didn’t finish it since it was A LOT of food. And when I ordered, my friend was surprised to hear me read the Korean on the menu. I guess he thought I could only speak it. It was hilarious when I explained to him that I could read, write, and speak. From then on we promised to message each other more in Korean. He felt bad for always communicating in English.

For the rest of the night we ate dinner and talked about a lot of random things. He told us what it was like going to an international school and church and explained the differences he noticed from living in the states. He actually lived not too far from where I live back in the states. It was fun meeting a Korean friend in real life since we don’t have much of a chance to meet Korean teens on program besides going up to random strangers which is dangerous and not to mention very very very weird in Korea. Since it was so fun, when I came home I started talking to another friend about meeting up and we planned to do something together with Sofia and Yves (one of my 나무반 classmates) who also talks to the same friend on HelloTalk.

That was my jam-packed Wednesday in Seoul. We did so much in only one day which explains why this post is so long. Reading it over and editing it will be a hassle! XD haha Thanks so much for reading and I hope you enjoyed~ Do not forget to follow my blog!~ 안녕!